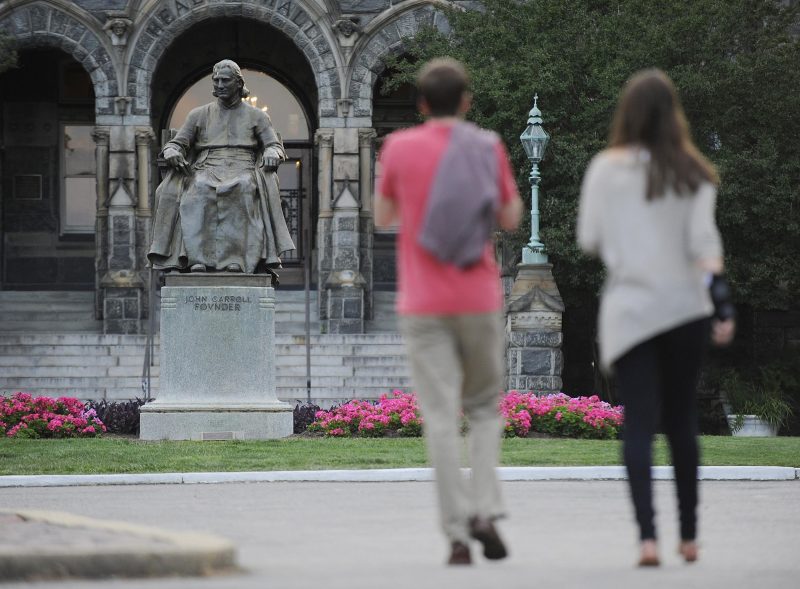 People walk on the campus of Georgetown University in Washington in this 2012 file photo. (CNS photo/Jonathan Ernst, Reuters)

WASHINGTON (CNS) — The Student Activities Commission at Georgetown University has decided not to impose sanctions on a student group that promotes healthy relationships and advocates for marriage as a monogamous, permanent union between a man and a woman.

The decision about the group Love Saxa followed after a long hearing that went into the early hours of the morning Nov. 3.

Two students at Georgetown University in Washington had filed a complaint against the group, saying it violated university standards governing student groups. Those standards state that clubs are not eligible for funding if their purpose or activities “foster hatred or intolerance of others because of their race, nationality, gender, religion or sexual preference.”

Georgetown is the nation’s oldest Catholic and Jesuit institute of higher learning in the United States, and this hearing caught the attention of many who were interested to see if the group that promotes Catholic teaching about marriage would be allowed to retain its status as a student organization.

The student-governed Student Activities Commission, which supports more than 100 co-curricular student organizations, voted 8-4 that the group was not in violation of university standards.

“As the commission strives to create an environment among student organizations where ideas can flow freely in a civil and respectful manner, the commission upholds the view expressed in the Student Organization Standards that ‘in a university, it is particularly necessary that this respect encompass diversity and difference of opinion’,” the Student Activities Commission said in a statement.

“The Student Activities Commission was right to continue to recognize us as a student organization in light of the fact that we hold views consistent with Georgetown’s own Catholic identity,” Amelia Irvine, president of Love Saxa, said in a statement.

“We hope that the outcome of this situation means that any and all other student groups at Georgetown which hold to beliefs consistent with Georgetown’s founding values will likewise be protected from unwarranted demands that they be dissolved,” she said.

So far, the conversation has been entirely among students, but the complainants have two business days following the hearing to file an appeal to the administrators in the student affairs office, in which case the administration would get involved.

“As a Catholic and Jesuit institution, Georgetown listens deeply and discerningly to the plurality of voices that exist among our students, faculty, and staff and is committed to the care of each member of our community,” Rachel Pugh, a spokesperson for Georgetown University, said in a statement.

“We strongly support a climate that continues to provide students with new and deeper contexts for engaging with our Catholic tradition and identity. … Love Saxa is one of many groups operating on campus with positions that affirm the teachings of the Catholic Church,” Pugh said.

The statement added that the university also supports “a climate that is welcoming to all students and supporting of our LGBTQ communities.”

“Now that the Student Activities Commission has reviewed the complaint, we encourage all students to follow our community commitment to open dialogue and mutual respect,” said Pugh in the statement.

Mary Forr, director of the Department of Life Issues for the Archdiocese of Washington, praised the student commission’s ruling.

“Love Saxa is an organization made up of courageous students committed to fighting for and cultivating a proper understanding of sexuality, gender, marriage and family,” she said in a statement.

“In a society where pornography and the hook-up culture are accepted as commonplace, the voice of Love Saxa, encouraging college students to pursue relationships based in the true meaning of love, is essential,” Forr said.

“We are grateful to hear that Georgetown recognized that this group has done nothing other than present views consistent with the teachings of the Catholic Church to their fellow Georgetown students,” she added.

NEXT: Catholic schools urged to include students with development disabilities