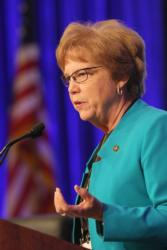 This fall’s onslaught of destructive hurricanes -– Harvey in Texas, Irma in Florida and Maria in Puerto Rico and the U.S. Virgin Islands –- has caused the agency to shift its priorities in the short-term toward aiding people who have lost homes and livelihoods, Dominican Sister Donna Markham said Nov. 13 in a report on agency activities.

“It’s been a tough year and it’s been very tough in the last few months,” Sister Markham said.

While she reported that the agency has collected $21 million from donors for hurricane relief since early September, she said millions of dollars more are needed because of the widespread devastation in Puerto Rico and the U.S. Virgin Islands, which will take years to rebuild.

Through early November, Catholic Charities USA had distributed $18 million to its affiliated diocesan agencies. The amount includes $2 million that Sister Markham delivered Nov. 10 to Father Enrique Camacho, director of Caritas Puerto Rico, the Catholic Charities affiliate on the island, and another $1 million given to Bishop Herbert A. Bevard of St. Thomas, U.S. Virgin Islands, during a private meeting in Baltimore at the bishops’ assembly.

She told Catholic News Service the Puerto Ricans she visited were living in destroyed homes with little shelter from the elements and had nowhere else to go. She said she was stunned by what she saw.

“People were sleeping in piles of rubble in their homes in corners where the roof still stood, under what little cover they could find,” she said.

Father Camacho took her to a parish where the priests continued to sleep on cots in the kitchen of their rectory “because that was the only place that had cover.”

“Seeing the mattresses on the floor and knowing they were going to be there for months was heartbreaking.”

Funding has been distributed for emergency housing, food, water, cleaning supplies, clothing, bedding, diapers and other baby needs. The agency also has deployed 150 case managers in storm-battered areas to assist people in navigating the unfamiliar task of seeking assistance.

Sister Markham’s report included a rundown of other agency priorities, including the need to develop hundreds of thousands of units of affordable housing around the country.

Other agency priorities outlined for the bishops included the integration of health and nutrition programs; serving the needs of immigrant and refugee communities; leadership development and strengthening the understanding of Catholic identity among staff nationwide; accelerating the development of small businesses and an entrepreneurial spirit in struggling communities; and boosting advocacy and collaborating on social policy concerns at the state and federal levels in partnership with the USCCB and other organizations.

In an earlier presentation, Bishop Gregory J. Mansour of the Maronite Eparchy of St. Maron of Brooklyn, chairman of the Catholic Relieve Services board of directors, delivered a report outlining the work of the bishops’ overseas relief and development agency.

Joined by Sean Callahan, CRS president and CEO, Bishop Mansour stressed the importance of the agency’s work in collaborating with local parishes and church agencies in 112 countries that are part of the church’s Caritas Internationalis network.

CRS served more than 121 million people during fiscal year 2016, an increase of 14 percent from the previous year, Callahan said. CRS prioritizes working through local organizations and church groups — what the church calls subsidiarity — to ensure that people have a say in how their communities develop, he explained.

“They’re not just looking for our staff to be there,” Callahan told the bishops. “They’re looking at a relationship with our conference. They want the U.S. to be with them and behind them. That’s what we call the solidarity that we do in working together in these different areas and being in there during their toughest times.”

Callahan said CRS invested between $100 million and $300 million during the last three years in developing local capacity, “so they can be on their own afterward, so we’re not the one continually doing the initiatives.”

He focused on four main tasks that guide the agency’s work:

— Promoting human dignity by helping people’s livelihoods, ensuring that children are educated and people can work on their farms so they can produce food for their families.

— Finding opportunities for health care, the production of food or goods, and ways to strengthen security so that people do not have to migrate for a better life.

— Providing hope to people so they can be productive in their lives and see a better future without having to turn to violence to survive.

— Empowering people to enable them to break down barriers so they can promote peace.

Bishop Mansour said such work changes lives in communities around the world.

NEXT: Persecuted Christians at risk of being forgotten, bishop says