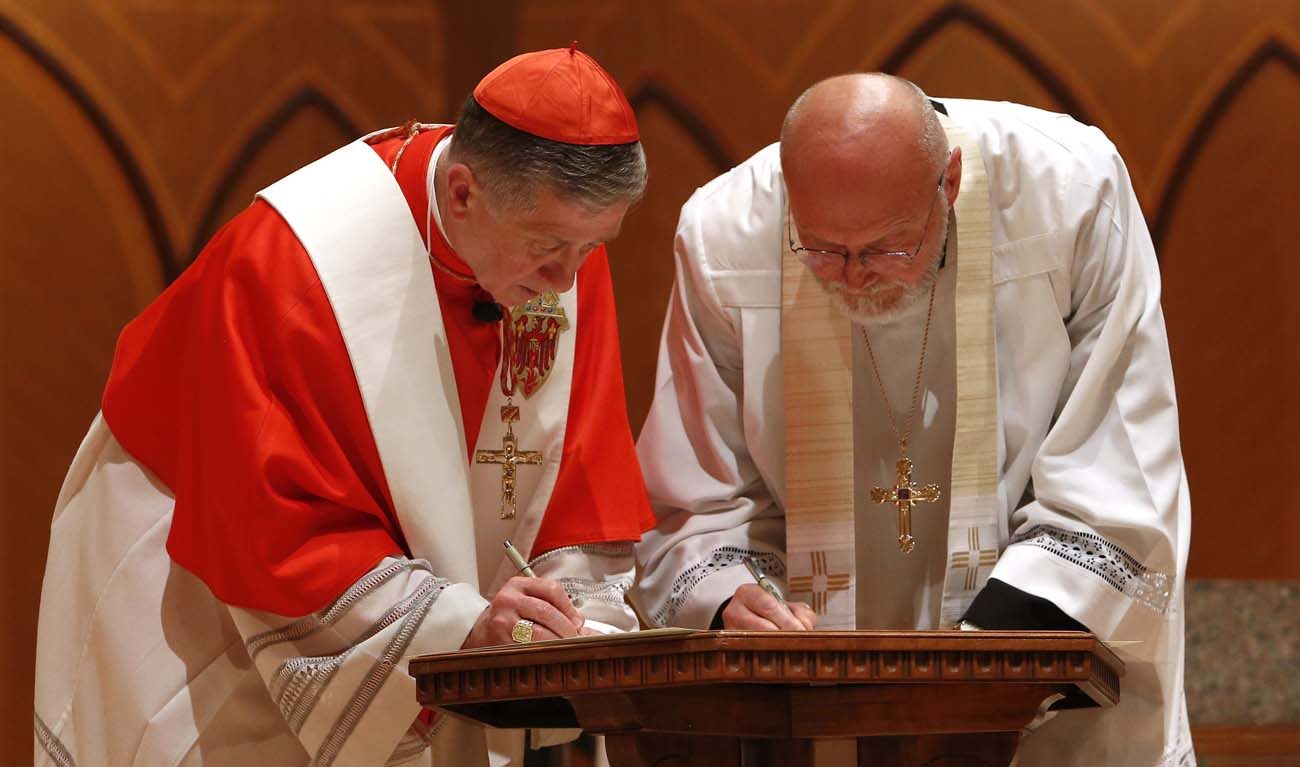 Cardinal Blase J. Cupich of Chicago and Lutheran Bishop Wayne Miller sign an agreement during an Oct. 31 service at Chicago's Holy Name Cathedral commemorating the 500th anniversary of the Reformation. The two leaders renewed a covenant between the Archdiocese of Chicago and the Evangelical Lutheran Church in America Metropolitan Chicago Synod. (CNS photo/Karen Callaway, Chicago Catholic)

CHICAGO (CNS) — Chicago Cardinal Blase J. Cupich and Lutheran Bishop Wayne Miller commemorated the 500th anniversary of the Reformation by recommitting their respective churches to dialogue and to working together on issues of mutual concern.

During an Oct. 31 service they led at Holy Name Cathedral, the two leaders also renewed a covenant between the Archdiocese of Chicago and the Evangelical Lutheran Church in America Metropolitan Chicago Synod.

The agreement “calls for a posture of openness toward each other and a movement beyond what divides us to dialogue on what mutually concerns us.”

Chicago Cardinal Joseph Bernardin and Lutheran Bishop Sherman G. Hicks signed the first covenant in 1989. It was a first between a Catholic diocese and a Lutheran synod in the United States.

The Reformation can be traced to Oct. 31, 1517, when, the story goes, Augustinian friar Martin Luther posted his 95 theses on the door of the Castle Church in Wittenberg, Germany. Formally called the “Disputation on the Power and Efficacy of Indulgences,” the theses sparked the Protestant Reformation.

Since the Second Vatican Council, the Catholic and Lutheran churches have had dialogues that have helped to draw the two bodies closer together.

On Oct. 31, 1999, the Lutheran World Federation and the Catholic Church signed the “Joint Declaration on the Doctrine of Justification,” which expresses, in theological language, that Catholics and Lutherans agree that salvation is mediated by Christ, by faith, through God’s grace, and that this necessarily leads to good works that further God’s kingdom.

In 2015, they released “Declaration on the Way: Church, Ministry and Eucharist.”

Together, these documents offer renewed hope for continued progress, without the rancor that plagued relations between the two groups for hundreds of years.

In his homily at the service, Cardinal Cupich reflected on Pope Francis’ historic meeting in Lund, Sweden, Oct. 31, 2016, where the pope and Bishop Munib Younan, president of the Lutheran World Federation, signed a joint statement in which Catholics and Lutherans pledged to pursue their dialogue to remove the remaining obstacles that hinder them from reaching full unity.

They also stressed their commitment to common witness on behalf of the poor, the needy and the victims of injustice.

“Our common witness to the Gospel in reaching out to the poor has so much to offer us as we move forward even if differing on significant matters,” the cardinal said. “Most assuredly this principle informed the early Catholic-ELCA dialogue of the late 1980s in Chicago … Tonight we affirm the Lund principle and pledge to act together in all the ways that we can, given our unity in Christ in baptism.”

The Pontifical Council for Promoting Christian Unity and the Lutheran World Federation announced Oct. 31 that the next task of their formal dialogue commission would be “to discern in a prayerful manner our understanding on church, Eucharist and ministry, seeking a substantial consensus so as to overcome remaining differences between us.”

“My simple suggestion this night,” Cardinal Cupich said, “is that we take up the reform of our churches together by reflecting on what it means to be the church of Jesus Christ, what it means to be authentic disciples and that we find unity in working together to put the Gospel into action.”

Martin Luther’s actions “led to a cascade of intended and unintended consequences that has had the effect of splintering the body of Christ into a fragmented array of groups that say different things about what they think,” Bishop Miller said during the service. This fragmentation is often approached with aggression or fear.

“But the God who is faithful to promises even when we are not, comes to us again here on this night with a new covenant; a promise produced by 50 years of honest, respectful conversation and relationship between Christians who think differently about some things,” Bishop Miller said.

He said the covenant was “grounded in our shared baptismal identity in the God who is Father, Son and Holy Spirit and because of this, a covenant built upon the certainty that the one who binds us together will always be more powerful than that which pulls us apart.”

The covenant calls Catholics and Lutherans in the Chicago area to continue to dialogue with each other and stand together to work for peace and an end to hate and bigotry, Bishop Miller said.

“But the power and promise of this night will only be realized when every single one of us allows Jesus to write these words on our hearts,” he said. “Because it is then that our lives as well as our words will become our witness.”