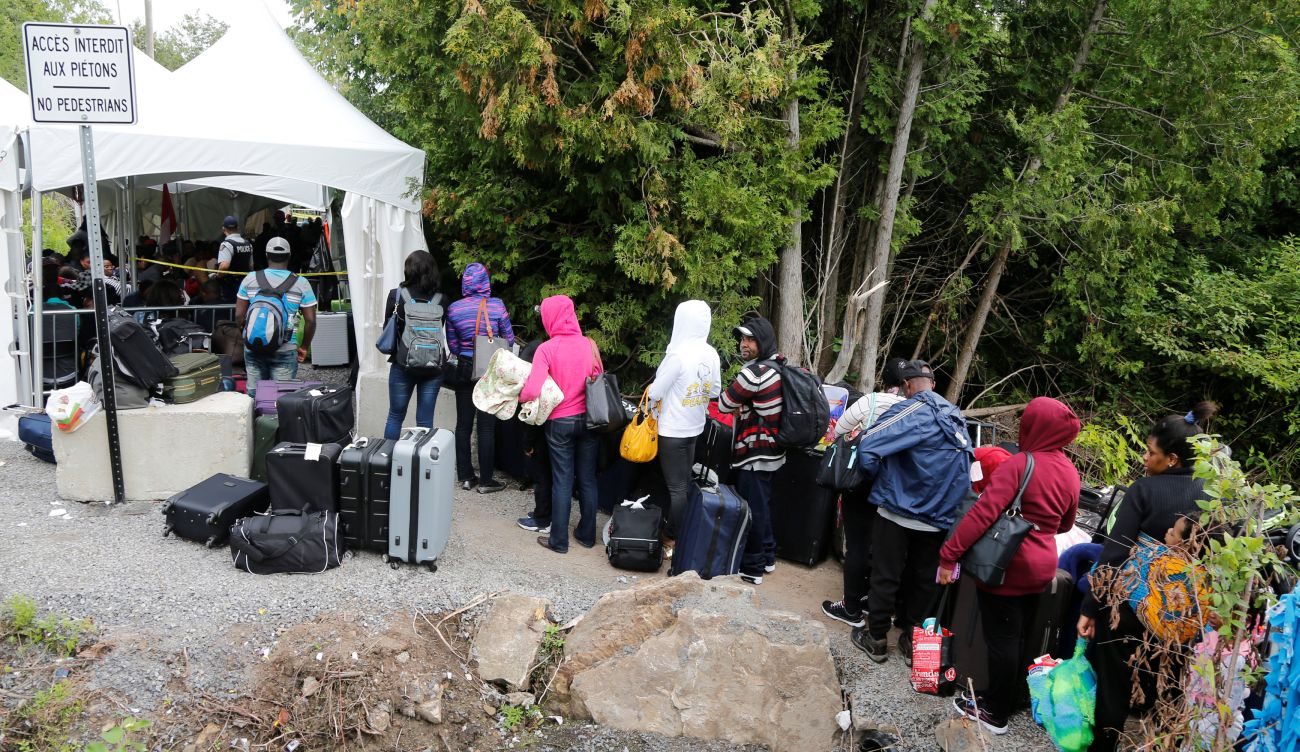 A group of Haitians wait to cross the U.S.-Canada border into Quebec from New York in late August. Advocates decried a Nov. 20 decision by Elaine Duke, acting secretary of the Department of Homeland Security, to end a program allowing 50,000 Haitian nationals to remain in the U.S. on July 22, 2019. (CNS photo/Christinne Muschi, Reuters)

WASHINGTON (CNS) — Advocates and church leaders rallied around 58,000 Haitians living in the United States since a ferocious 2010 earthquake after the Trump administration moved to end a humanitarian program that allowed them stay in the country.

The Haitians will be forced to leave the country by July 22, 2019, or face deportation.

Department of Homeland Security Acting Secretary Elaine Duke terminated the Temporary Protected Status, or TPS, for Haitians Nov. 20 after determining that conditions in the poor Caribbean nation had improved significantly since the earthquake. The effective date of the termination was delayed for 18 months “to allow for an orderly transition.”

Religious leaders and advocates on a media conference call Nov. 21 described the decision affecting Haitians in dire need of stability and security as lacking compassion and kindness.

“It’s not a question of sending them home. After so many years in the United States, they are home,” said Archbishop Thomas G. Wenski of Miami.

“People have put down roots. They’ve started businesses and families and their children are American citizens. To send them back and take away their means of livelihood would not be in the best interested of the Haitians, their children or the American society in which they live,” he said.

The Center for Migration Studies estimates that Haitians with TPS have about 27,000 U.S.-born children.

“This decision will devastate many families with TPS members, including those with U.S. citizen children, It will tear individuals from loved ones, homes, careers and communities. It will also have a direct negative consequences for many in Haiti who rely on remittances for support,” he said in a statement Nov. 21.

He said the U.S. has a responsibility to provide continued temporary protection for TPS holders until their return and reintegration at home can be safely accomplished. “Catholic social teaching recognizes a duty to not turn our backs on our neighbors in need,” he said, adding, “Our Haitian neighbors, at home and abroad, need our compassion while their country rebuilds and recovers.”

Archbishop Wenski explained in the media conference that during a fact-finding trip he led to Haiti in September, his delegation learned that the country “does not have conditions adequate to receive any number of people being expelled from the United States or any other place.”

He and others on the call urged people of faith and “good will” to pressure Congress to enact a legal solution to make permanent the legal status of Haitians and people from other countries granted TPS.

Jean Atkinson, executive director of the Catholic Legal Immigration Network, was on the same delegation and agreed with the archbishop’s assessment. She called Duke’s decision “morally outrageous … unfounded” and called her to undertake assessment that considers the actual conditions in the country.

In a statement late Nov. 20, Homeland Security said Duke determined that “those extraordinary but temporary conditions caused by the 2010 earthquake no longer exist,” requiring that TPS for Haitians be terminated.

“Since the 2010 earthquake, the number of displaced people in Haiti has decreased by 97 percent. Significant steps have been taken to improve the stability and quality of life for Haitian citizens, and Haiti is able to safely receive traditional levels of returned citizens,” the department said.

Atkinson and others disagreed with the assessment. They said the return of up to 58,000 people to the Western Hemisphere’s poorest nation would destabilize a country where adequate housing is unavailable and a large portion of the population faces food shortages.

Lys Isma, a young Haitian TPS holder living in South Florida, said she came to the U.S. as an infant with her parents and was a teenager when the earthquake struck. She said the Homeland Security decision “filled me with a lot of emotions.”

“When Haitians were designated for TPS, I was 15 years old. I was able to work, to drive and live without fear. Working meant I could afford tuition and send money to relatives in Haiti,” Isma during the press call.

“My community is going to be most devastated because of the end of the TPS designation,” she said. “People are being given 18 months to sell businesses, sell their homes, decide where to leave their children. The decision made me sad, not just for me, but for my community.”

NEXT: Teens, adults forsake comfort to experience way of life for homeless