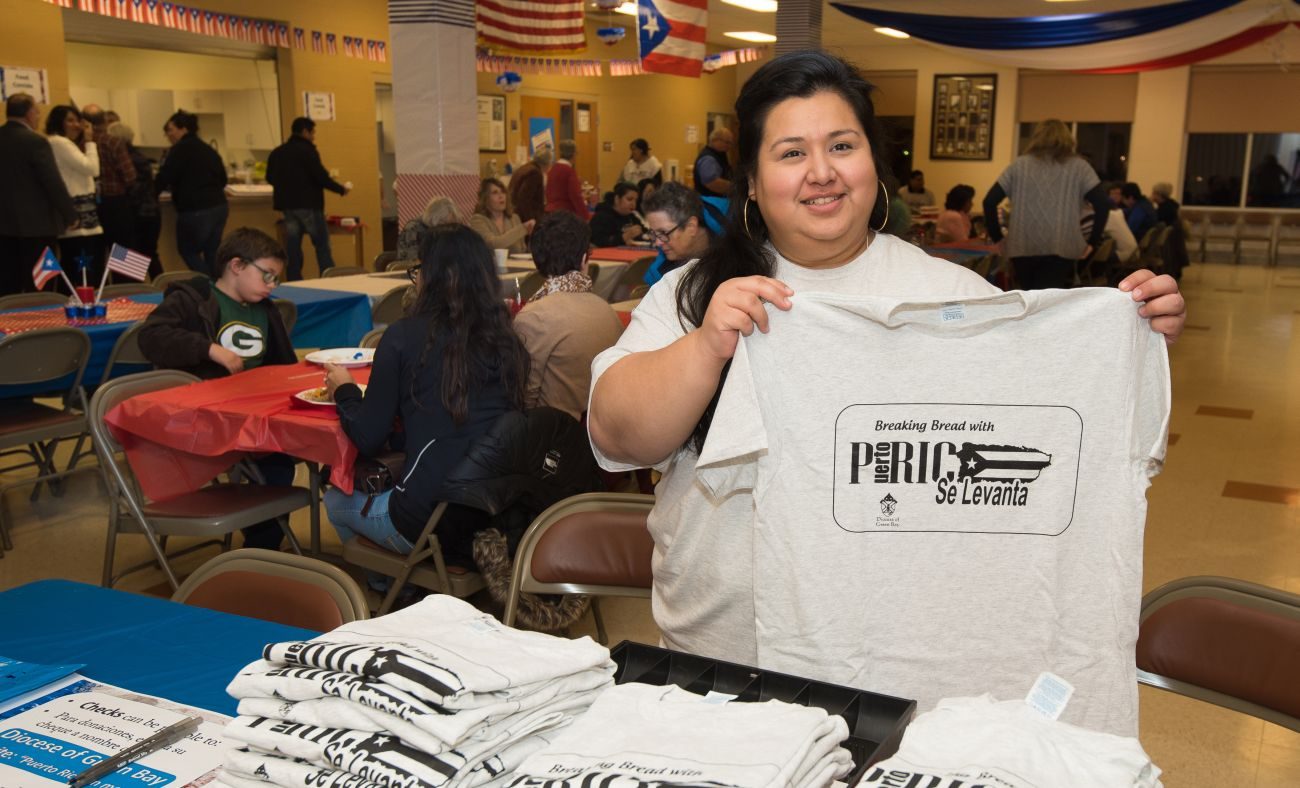 Diana Sturgeon, a member of St. Willebrord Parish in Green Bay, Wis., holds up a T-shirt during the "Breaking Bread With Puerto Rico" fundraiser Nov. 17 at St. Willebrord Church. Authentic Puerto Rican food, as well as gift baskets and T-shirts, were for sale to help raise money that Catholics in the Green Bay Diocese will use to purchase and serve Christmas dinners at four parishes in Puerto Rico during a trip to the island in December, (CNS photo/Sam Lucero, The Compass)

ALLOUEZ, Wis. (CNS) — What began as an effort by two members of a Green Bay parish to help family and friends affected by Hurricane Maria has mushroomed into a major relief project organized by parish and diocesan leaders.

The project, “Breaking Bread With Puerto Rico: Home for Christmas,” included a Nov. 17 fundraiser at St. Willebrord Church in Green Bay that brought in more than $8,000. The effort will continue with a trip to Puerto Rico in December to serve Christmas meals to parish families.

Like the hurricane that hit the island of Puerto Rico Sept. 20, the fundraiser quickly picked up momentum after Maria Garcia and Griselle Montalvo, Puerto Rican natives and members of St. Willebrord Parish, began looking for ways to assist families and friends on the Caribbean island.

“In the beginning, when everyone was trying to contribute or do something for Puerto Rico, we really had a lot of closed doors because we couldn’t ship anything,” Garcia told The Compass, newspaper of the Green Bay Diocese. “A lot of the items actually making it to Puerto Rico were not being distributed to other areas than the north, so we were concerned about our families in the southern part.”

Montalvo is from Ponce and Garcia is from Juana Diaz, both neighboring cities in the south of the island.

The logistics of reaching the southern communities posed an immediate challenge, so Garcia and Montalvo chose another idea. “We were trying to figure out — if we did gather some money from the parish — what we would do, so we thought about Christmas,” said Garcia.

“Christmas is a really important time for us, like it is in the U.S., but it is a time to gather with family — usually big families in Puerto Rico,” she said. Knowing that Christmas might not be as cheerful this year, the women decided they would collect funds for food.

As their plans unfolded, word got out at the offices of the Green Bay Diocese, where Garcia serves as administrative assistant for the diocesan Department of New Evangelization.

The department’s young adult coordinator, Jane Angha, suggested “we gather with the young adults in an effort to do something for Puerto Rico,” said Garcia.

That led to involvement by young adults from the Appleton and Green Bay areas, along with University of Wisconsin-Green Bay students.

“This is part of our Catholic foundation that we serve and walk in solidarity with those who are hungry,” Angha said, “and it happens to fall right in our midst, where our neighbors, our co-workers, families are struggling. The outpouring has just been beautiful.”

Garcia and Montalvo — along with Angha and Emily Jenks, Fox Cities regional coordinator for Young Adult Ministry — will travel to Puerto Rico Dec. 18-23.

They will fly to San Juan and drive south to Juana Diaz, where they will stay at the home of one of Garcia’s relatives. Their plan is to purchase food in Puerto Rico, which will help the local economy. Then they will cook a traditional Puerto Rican meal, featuring rice with “gandules,” or pigeon peas, and pork, and serve meals to people at four parishes.

They have been in touch with the Diocese of Ponce, Puerto Rico, to help organize the Christmas meals.

Preparing meals and sharing them with neighbors is one tradition Garcia remembers about Christmas in Puerto Rico.

“We can imagine how sad it’s going to be for everyone when they can barely have anything for themselves, and then they can’t do it for others,” she said. “So right away we thought that this was something we could do for Christmas.”

Garcia said members of the diocesan Curia have embraced their fundraising project. “From day one, they have been concerned,” she said. “It’s just been overwhelming how much love people have shown through this whole really difficult process. When you feel helpless, it’s good to have people who are praying for you.”

Garcia explained that money raised will be used for the Christmas meals and rental of a van to transport the food. A grant the group received will cover airfare to and from Puerto Rico.

Garcia said her last visit to Puerto Rico was in July 2014. “It was green and lush and as beautiful as I remembered it,” she said. “This year will be different. I am preparing myself mentally and spiritually because I know it will be hard to face the devastation.”