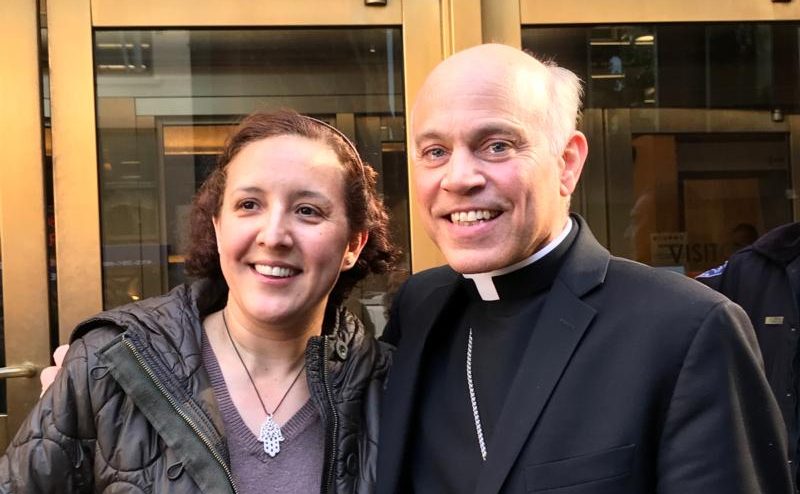 San Francisco Archbishop Salvatore J. Cordileone stands with Yadira Mejia outside the Sansome Federal Building in San Francisco Nov. 21. Her husband, Hugo, had been detained for about six months in his fight against deportation, but he was released from detention on a $15,000 bond that same day. (CNS photo/Valerie Schmalz, Catholic San Francisco)

SAN FRANCISCO (CNS) — Archbishop Salvatore J. Cordileone of San Francisco asked the United States to take its temperature as a society after he got personally involved in the detention case of an immigrant in the country illegally.

In May, Hugo Mejia, 37, and a co-worker were handcuffed by federal immigration officials when they reported for work at a construction site at Travis Air Force Base in Fairfield, about 45 minutes by car from their homes.

After being taken into custody, “Mejia (was) held 100 miles away from his home in San Rafael” at an Immigration and Customs Enforcement detention facility in Elk Grove, Archbishop Cordileone said in an op-ed essay published Nov. 20 — the day of Mejia’s immigration hearing — in the San Francisco Chronicle.

“As I visited and prayed with Mejia’s family, their anguish at the separation was palpable — but so was their dignity and the power of their faith in the face of such great hardship,”the archbishop wrote.

During the hearing, a judge said Mejia, 37, could be freed on bond as his case wound its way through immigration court. The co-worker, Rodrigo Nunez, was not as lucky; he was deported in August.

As Mejia’s fate hung in the balance, the archbishop asked, “How should our society treat Mejia, and millions of other sisters and brothers like him? How would you want to be treated if you were in their situation?

“The decision is now before us. The character of our country will be defined by our answer.”

Archbishop Cordileone also asked the question uttered by Cain in response to God in the Book of Genesis: “Am I my brother’s keeper?”

“An affirmative answer means caring for people who are suffering, a core value shared across faith traditions and points of view,” the archbishop said. “Anything less is not fully human, and it is the personal encounter that always humanizes what can otherwise remain distant and abstract.”

In short, he added, “we are all our brother’s and sister’s keepers. This is simply another way of stating the golden rule, an equally universal ethical principle.”

At Mejia’s hearing, Archbishop Cordileone said, “the possibility that the pain of the Mejia family could be eased brings hope to many of us who have raised our voices for Mejia’s release. Indeed, our country has still not created a workable immigration process for people like Mejia, whose labor nevertheless advances industries that have created great wealth.

“And here is a concrete, humanized example: Until now, no judge has ever given full consideration to the contours of Mejia’s life and his contributions to this country over these last 16 years that he has lived and worked here,” he added.

While visiting the Mejia family, “Mejia called his family from inside the immigration prison. I felt how much he missed his wife, Yadira Munguia, and their three children, and as his voice echoed over the phone, I could understand where the goodness of his family comes from,” Archbishop Cordileone said.

“Mejia is a devoted husband and father, a churchgoer and a construction worker. He volunteers at his children’s school and is a member of the International Union of Painters and Allied Trades. The detention of someone with deep roots in the community is a call for all of us to look beyond heated rhetoric and see the humanity of the most vulnerable members of our communities.”

The father of three, Mejia has been in the United States for 16 years. Neither he nor Nunez had criminal records, but Mejia had a decade-old removal order that prompted immigration police to apprehend him.