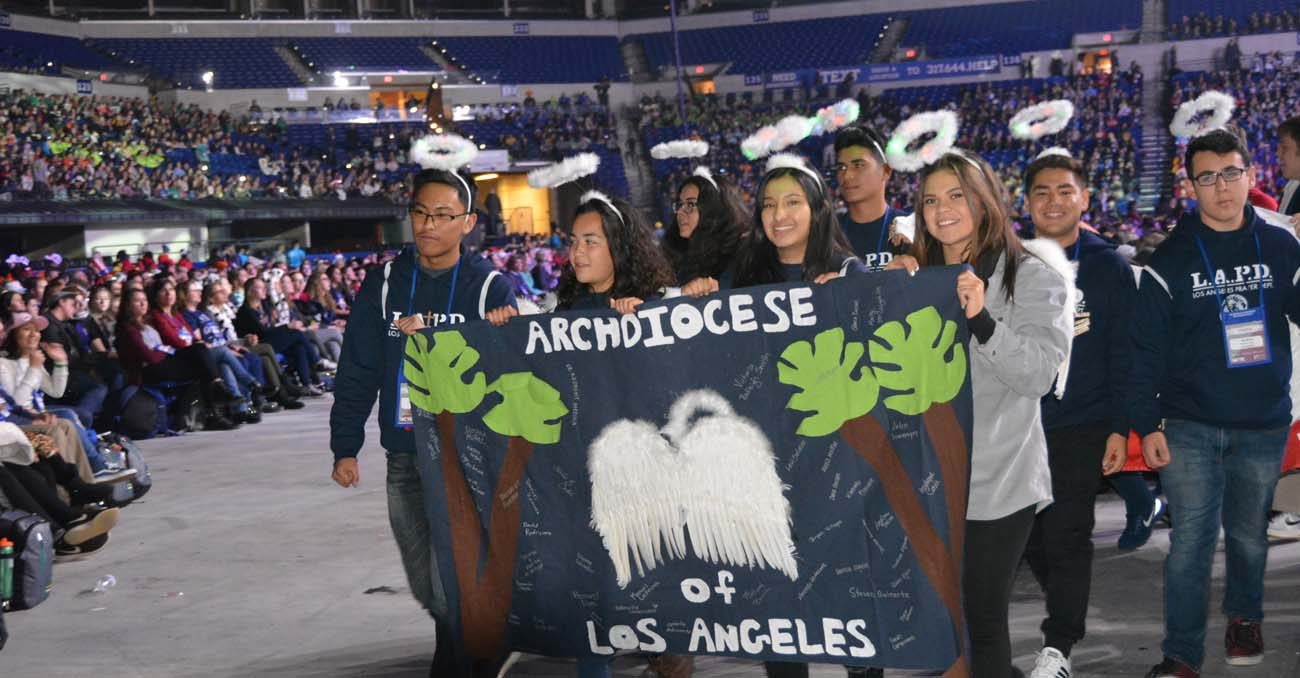 Youth from the Archdiocese of Los Angeles process into Lucas Oil Stadium in Indianapolis Nov. 16 for the opening general session of the National Catholic Youth Conference. The biennial conference draws some 20,000 Catholic teenagers from across the country. (CNS photo/Natalie Hoefer, The Criterion) .

INDIANAPOLIS (CNS) — It wasn’t the story that the 20,000 Catholic youths were expecting to hear from a religious sister.

And the audience of young people inside Lucas Oil Stadium on the morning of Nov. 17 became more quiet and riveted as Sister Miriam James Heidland shared the hard, heartbreaking chapters of her life story.

She told participants at the National Catholic Youth Conference in Indianapolis that she was sexually assaulted when she was 11. She began drinking alcohol on her 12th birthday. She was raped when she was 13 and she was an alcoholic by the age of 21.

“I woke up one morning when I was 21, and I remembered two things,” recalled Sister Miriam, a member of the Society of Our Lady of the Most Holy Trinity. “Number one, I remembered what I had done the night before, and it was awful. Secondly, I remember something that was so much deeper in the area of shame.

“I remembered I had promised myself that I wasn’t going to do that anymore. At that moment, I realized I couldn’t stop, that I was sick. I crawled up in a ball on the floor of my room in college, and I just wished for death. And I didn’t know what to do.”

God did, she told the crowd of young people.

“He started sending people into my life to speak the truth to me,” she said as walked across the stage set up in the middle of the stadium floor.

One of the people God sent to her was a priest who challenged her to change her life.

“He would say, ‘You’re called for more. What are you doing with your life? I know you want more. You have a great destiny for your life. Have you thought about saying ‘yes’ to it?’

“That man loved Christ, and he let Christ try to re-form him to the core of his being. And one of the reasons I’m here before you is because of the power of one person who said ‘yes’ to Christ. And how often do you and I think we can’t make a difference? But your ‘yes’ matters. Your life matters. When you say ‘yes,’ the world is changed.”

So has the life of Sister Miriam.

She also told the story of two choices that continue to define her life.

“My biological parents were high school students, 17 years old, obviously not married,” she said.  “To this day, I’ve never seen her face, but I have a deep intuition that at one point my mother thought of aborting me, but she didn’t. And I stand here before you today because a scared 17-year-old girl said ‘yes’ to life and to the child in her womb.”

Then there was the choice of the couple who became her mother and father when they adopted her.

“One of the first pictures my parents have of me was at Christmas time. My mom put me under the Christmas tree and said I was the gift to the family that year.”

She told the audience that God also offers people the gift of his love.

“God has no other ulterior motive,” she told the youths, “than for you to share in his own beautiful life.”

PREVIOUS: Detention case prompts archbishop to ask what kind of society we are in

NEXT: Youth, religious, priests encourage each other at conference to hear call