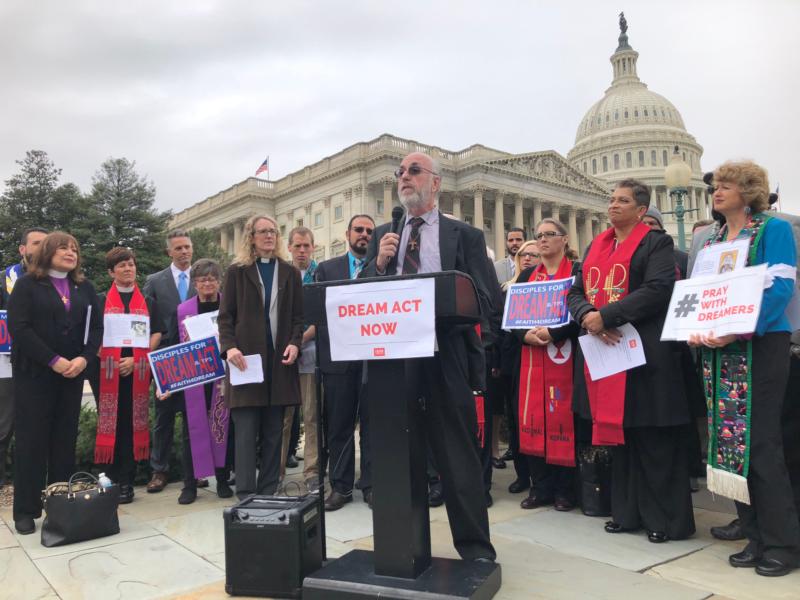 Patrick Carolan, executive director of the Washington-based Franciscan Action Network, joined other faith leaders Nov. 1, the feast of All Saints, outside of the U.S. Capitol to ask politicians who call themselves Christians to act as Jesus would when shaping laws that affect immigrants. Those who craft laws that hurt migrant, hurt Christ, the group said. (CNS photo/Rhina Guidos)

WASHINGTON (CNS) — Some carried cards with a photo of St. Teresa of Kolkata or Blessed Oscar Romero and stood near the U.S. Capitol on the feast of All Saints Nov. 1, calling on politicians who call themselves Christian to act as Jesus would when shaping laws that affect migrants.

“To the senators and representatives who call yourselves Christians … the Bible says that that which you do to the most marginalized among us, you do to Christ himself,” said the Rev. Jennifer Butler, CEO of Washington-based advocacy group Faith in Public Life.

She was one in a crowd of more than two dozen religious leaders gathered outside of Congress to primarily call on politicians to pass — and pass soon — legislation to help youth who were brought to the U.S. illegally as minors.

However, like others in the group, she also spoke about a general sense of discrimination toward many other immigrants in the country. She called on politicians to avoid using a bill that would help the young migrants to hurt other groups of migrants.

The group asked lawmakers to pass the Development, Relief and Education for Alien Minors Act, or DREAM Act. In theory, the measure would help youth and young adults, brought illegally into the country as minors, attain some form of immigration relief.

Though first introduced in 2001, the bill has never passed, but many see it as the most promising way for some 800,000 youth who are in the country illegally and who, until recently, could apply for a work permit and a reprieve from deportation under the Deferred Action for Childhood Arrivals program, known as DACA. The program was put into place in 2012 by then-President Barack Obama.

In September, President Donald Trump rescinded the program and asked Congress to find a legislative fix. Some have suggested a version of the DREAM Act as that fix. Because of the DREAM acronym, those who could qualify are popularly known as “Dreamers.”

“On Sept 5, in a stroke of profound cruelty, President Trump terminated (DACA) putting hundreds of thousands of immigrant youth at risk of deportation and out of a job when their work permits expire in March,” said Rev. Butler. “Congress must now right this wrong.”

Some believe that the only way politicians will pass the DREAM Act is in exchange for more money to fund a border wall with Mexico or for more federal money for actions that supporters of the bill say would harm migrants. But the religious leaders who gathered outside Congress said such funding measures not only treat the young migrants as pawns and also are not actions worthy of the men and women serving in Congress who call themselves Christian.

Congresswoman Lucille Roybal-Allard, D-California, one of the co-authors of the DREAM Act, stood with the group to deliver a message to Trump and others.

“Mr. President, Scripture tells us to love our neighbors as ourselves. By breaking up families and upending the lives of Dreamers, you and (House) Speaker (Paul) Ryan are not being good Samaritans,” she said.

Patrick Carolan, executive director of the Washington-based Franciscan Action Network, had stronger words for Republican House Speaker Ryan, of Wisconsin, and for other politicians who publicly proclaim their Christian faith but back laws that hurt migrants.

“We’re called by our faith to welcome the stranger … most of our members of Congress claim to be Christian, they claim to follow the teachings of Jesus,” Carolan said.

Rand was the 20th-century philosopher who supported the belief that no taxes or government regulations would produce the highest good. Her writings are popular among some conservatives.

“We, at the Franciscan Action Network and all the members of the Franciscan family, will continue to advocate even if it means that we risk arrest on behalf of all our brothers and sisters who are not welcome here,” he said. “We call on (members of Congress) today, on the feast of All Saints, we call on Paul Ryan, who claims to be Catholic, and all of his Catholic colleagues to start living their faith by welcoming the stranger or to please stop pretending to be Catholic.”

Imam Yahya Hendi, Muslim chaplain at Georgetown University, said there was one reason all the faith leaders had gathered at such an urgent moment.

“I am proud to say I am here today united with people from all religions because we must be here for each other to make sure we are creating a kingdom that leaves no one behind, no matter religion, ethnicity or where they were born,” he said.

And houses of worship and religious leaders such as the ones at the gathering, he said, are the “first responders” for the most vulnerable in society at the moment.

“We are rooted in communities and they turn to us when they have lost their voice,” he said. “So, we can lift their voices up exactly as God wants us to do.”

NEXT: Priest resigns as consultant to U.S. bishops after letter to pope