Priest resigns as consultant to U.S. bishops after letter to pope 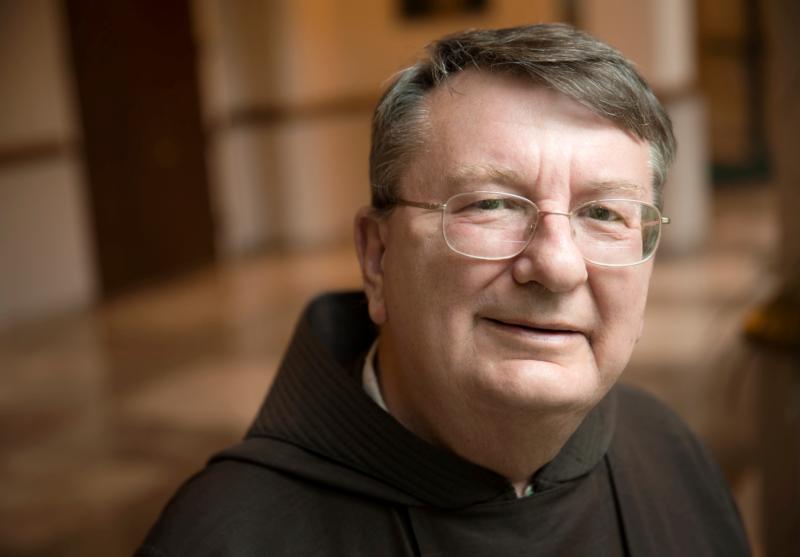 In this 2013 file photo, Capuchin Franciscan Father Thomas Weinandy is pictured at the Washington headquarters of U.S. Conference of Catholic Bishops where he served as chief adviser on doctrinal and canonical affairs. (CNS photo/Nancy Phelan Wiechec)

UPDATED – WASHINGTON (CNS) — After publication of his letter to Pope Francis questioning the pontiff’s teachings, Father Thomas Weinandy has resigned from his position as consultant to the U.S. Conference of Catholic Bishops’ Committee on Doctrine.

The Capuchin Franciscan priest is former executive director of the U.S. bishops’ Secretariat of Doctrine and Canonical Affairs, serving in the post from 2005 until 2013. He expressed loyalty to the pope but at the same time told the pope that “a chronic confusion seems to mark your pontificate.”

He released his letter to several Catholic and other media outlets Nov. 1, including Crux. The priest told Crux, a Catholic news outlet, he did not write the letter in an “official capacity,” and he was alone responsible for it.

“After speaking with the general secretary of the conference today, Father Thomas Weinandy, O.F.M., Cap., has resigned, effective immediately, from his position as consultant to the USCCB Committee on Doctrine,” said James Rogers, chief communications officer for the USCCB.

“The work of the committee is done in support of, and in affective collegiality with, the Holy Father and the church in the United States. Our prayers go with Father Weinandy as his service to the committee comes to a close,” Rogers said in a statement issued late Nov. 1.

In a separate statement, Cardinal Daniel N. DiNardo of Galveston-Houston, USCCB president, said the departure of Father Weinandy as a consultant “gives us an opportunity to reflect on the nature of dialogue within the church.”

“Throughout the history of the church, ministers, theologians and the laity all have debated and have held personal opinions on a variety of theological and pastoral issues,” the cardinal said. “In more recent times, these debates have made their way into the popular press. That is to be expected and is often good.

“However, these reports are often expressed in terms of opposition, as political — conservative vs. liberal, left vs. right, pre-Vatican II vs. Vatican II. These distinctions are not always very helpful,” he added.

In his letter, Father Weinandy outlines five areas of concern where he said confusion may result among the faithful.

First, he shared unease with the pope’s “manner” of teaching in his 2016 apostolic exhortation “Amoris Laetitia” (“The Joy of Love”). “Your guidance at times seems intentionally ambiguous, thus inviting both a traditional interpretation of Catholic teaching on marriage and divorce as well as one that might imply a change in that teaching,” Father Weinandy wrote.

He said that while the exhortation urged pastors to accompany and encourage people in irregular marriages, it is unclear what the pope means by “accompaniment.”

“To teach with such a seemingly intentional lack of clarity risks sinning against the Holy Spirit, the Spirit of truth. The Holy Spirit is given to the church, particularly to yourself, to dispel error, not to foster it,” the letter said.

It added that the pope also “seems to censor and even mock” those who uphold traditional church teaching on marriage as “Pharisaic stone-throwers who embody a merciless rigorism.”

“This kind of calumny is alien to the nature of the Petrine ministry,” the letter said.

Second, Father Weinandy wrote, “too often your manner seems to demean the importance of church doctrine,” accusing the pontiff of portraying doctrine “as dead and bookish.” He said the pope’s critics have been accused of “making doctrine an ideology.”

“But it is precisely Christian doctrine … that frees people from worldly ideologies and assures that they are actually preaching and teaching the authentic, life-giving Gospel,” he said.

Father Weinandy’s third concern focused on the pope’s appointment of some bishops “who seem not merely open to those who hold views counter to Christian belief but who support and even defend them.”

“What scandalizes believers and even some fellow bishops, is not only your having appointed such men to be shepherds of the church, but that you also seem silent in the face of their teaching and pastoral practice,” he wrote.

As a result, Catholics who “have championed authentic Catholic teaching” have lost enthusiasm and “are losing confidence in their supreme shepherd,” the letter said.

Fourth, the Capuchin told the pope that the push for decentralization in the church weakens church unity.

“Encouraging a form of ‘synodality’ that allows and promotes various doctrinal and moral options within the church can only lead to more theological and pastoral confusion,” he said.

Finally, Father Weinandy accused the pope of restricting criticism of his pontificate despite calls for transparency and invitations to all people, especially bishops, to speak openly.

“Bishops are quick learners, and what many have learned from your pontificate is not that you are open to criticism, but that you resent it. Many bishops are silent because they desire to be loyal to you, and so they do not express – at least publicly; privately is another matter – the concerns that your pontificate raises. Many fear that if they speak their mind, they will be marginalized or worse,” Father Weinandy’s letter said.

He concluded the letter by offering his prayers for the pope and writing, “May the Holy Spirit lead you to the light of truth and the life of love so that you can dispel the darkness that now hides the beauty of Jesus’ church.”

In an interview with Crux and an explanation about his letter published by Catholic World Report, Father Weinandy said he felt divine inspiration for writing the letter to the pope.

He said last May when he was in Rome for a meeting of the International Theological Commission, he “spent two different sessions in prayer” about whether he should speak up about his concerns with the papacy.

Finally, he said, he told God to send him “a clear sign” that he should do it, suggesting that sign should come when he ran into someone he had not seen in “a very long time” and it would be a person he’d never expect to see in Rome while he was there. This person would tell him to “keep up the good writing.”

Father Weinandy then had a chance meeting with an archbishop he had not seen in 20 years. The prelate congratulated the priest on a recent book and said the words, “Keep up the good writing.” So Father Weinandy proceeded with the letter to Pope Francis.

“So, in a sense, I wanted to gain God’s approval, and not simply rely on myself,” he told Crux. “I feel the story shows that I’m attempting to be helpful.”

Cardinal DiNardo, in his statement about the nature of dialogue in the Catholic Church today, said that “Christian charity needs to be exercised by all involved.”

“In saying this, we all must acknowledge that legitimate differences exist, and that it is the work of the church, the entire body of Christ, to work toward an ever-growing understanding of God’s truth,” he said.

“As bishops, we recognize the need for honest and humble discussions around theological and pastoral issues,” he continued. “We must always keep in mind St. Ignatius of Loyola’s ‘presupposition’ to his spiritual exercises.”

“It should be presumed that every good Christian ought to be more eager to put a good interpretation on a neighbor’s statement than to condemn it,” he said, quoting the saint.

“This presupposition should be afforded all the more to the teaching of our Holy Father,” Cardinal DiNardo explained.

The USCCB is “a collegial body of bishops working toward that goal,” he added, asserting that the bishops, “as pastors and teachers of the faith, “always stand in strong unity with and loyalty” with Pope Francis.

Quoting “Lumen Gentium,” the Dogmatic Constitution on the Church, Cardinal DiNardo said the pope “is the perpetual and visible source and foundation of the unity both of the bishops and of the whole company of the faithful.”

NEXT: Faith leaders push administration to extend protections for immigrants