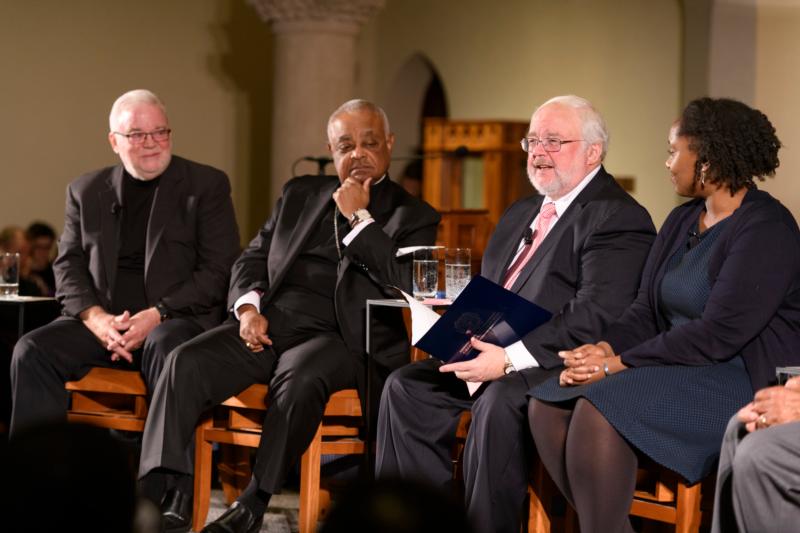 John Carr, director of the Initiative on Catholic Social Thought and Public Life at Georgetown University, second from right, leads a Nov. 13 panel at the university titled “Confronting Racism in Our Hearts and in Our Nation.” Panelists from left are the Rev. Jim Wallis, president of Sojourners, Atlanta Archbishop Wilton D. Gregory and Marcia Chatelain, associate professor of history and African-American studies and a member of the Working Group on Slavery, Memory and Reconciliation. (CNS photo/Rafael Suanes, Georgetown University)

WASHINGTON (CNS) — Government, religious and university leaders encouraged a standing-room-only crowd at Georgetown University not to lose hope in the battle against racism.

What drew the large audience was a panel on “Confronting Racism in Our Hearts and in Our Nation,” held Nov. 13 the university’s Dahlgren Chapel of the Sacred Heart.

The four panelists were Rep. John Lewis, D-Georgia, a civil rights leader who helped organize the 1963 March on Washington; Atlanta Archbishop Wilton D. Gregory; Marcia Chatelain, associate professor of history and African-American studies and a member of the Working Group on Slavery, Memory and Reconciliation at Georgetown; and Rev. Jim Wallis, the author of “America’s Original Sin: Racism, White Privilege and the Bridge to a New America.”

The moderator was John Carr, director of Georgetown’s Initiative on Catholic Social Thought and Public Life, which co-sponsored the dialogue along with the university’s Office of Mission and Ministry.

Carr opened the panel by acknowledging how racism played a role in Georgetown’s own history, as the sale of slaves was used to financially support the college, which he called “the very definition of white privilege.”

In April, Georgetown University took a historic step when it renamed two buildings that had been named after Jesuit priests who played a part in an 1838 sale of slaves by the school.

One of those buildings is now called Isaac Hawkins Hall, after the slave whose name was first on that bill of sale, and the other is now Anne Marie Becraft Hall, named for a free black woman who founded a school in Georgetown for black girls.

“The first thing our church has to do is to acknowledge that it, too, is racist,” said Archbishop Gregory. “The sin of racism isn’t a sin that is out there, it is a sin that permeates all of us.”

Just like Pope Francis said, “I’m a sinner” when identifying himself, Archbishop Gregory said if the Catholic Church is going to call people to conversion, it needs to start by saying, “It’s a journey I’ll take with you.”

“The issue of racism at its core is a spiritual difficulty,” said Archbishop Gregory. “Like any spiritual experience, it calls us to conversion. … It might reveal (that) what we thought we understood, we don’t understand. That’s the heart of a spiritual conversion.”

In recent times, there have been many momentous occasions that brought about the hope that racism was going away, such as the election of the first black president, said Archbishop Gregory. But in each of those occasions, “we confused achievement of a public event with inner conversion,” he said.

The Atlanta archbishop also pointed out that the Rev. Martin Luther King Jr. was primarily a spiritual leader. He was so successful because he was “the first one who spoke to the heart of our nation about the spiritual values that were being ignored,” the archbishop said.

Archbishop Gregory gave an example from his own life about how racism continues to be present in daily life. He was dressed in a nice golf outfit and walking around a resort in Georgia, when a young white woman came up to him to ask where the restaurant was, assuming he was a member of the staff. Underlying that action, the archbishop said, was another assumption that a man of color could not be there simply to enjoy the resort and play golf, no matter how he was dressed.

Lewis, who has been arrested almost 50 times and was beaten by Alabama state troopers after leading more than 600 marchers on “Bloody Sunday” in 1965 said, “I’ve seen a great deal, but I have never in all my days seen what is happening in America today. Sometimes I feel like we have lost our way.”

But despite experiencing racism firsthand, both Lewis and Archbishop Gregory still encouraged hope and love.

“If there is a virtue that this particular moment really calls for, it is the virtue of hope,” said Archbishop Gregory.

“We have to give our people … especially our young people, our children, the sense of hope and faith that we are going to make it. That we are going to overcome,” Lewis said. “And tell them not to be overcome in a sea of despair and never to become bitter or hostile – that the way of love is a much better way. Just love everybody. You may get arrested and go to jail a few times. You may be beaten and left bloody, but you are making a down payment on building the beloved community.”

Rev. Wallis pointed out that through his actions during the civil rights movement, Lewis displayed a love that was willing to risk something of himself.

“Those of us who believe in what we’re saying need to think, … ‘What is the risk we are willing to take?'” said Rev. Wallis. Later, he added his own thoughts about the virtue of hope, saying that it is “not a feeling or a mood” but rather “a decision you make because of faith,”

Responding to a question about the “do’s and don’ts” of combating racism, Chatelain encouraged people not to try to brush away the grief felt by people who experience racism, adding that this moment in history provides an opportunity to tend to the real grief of communities, which often gets shut out because it feels angry or uncomfortable.

“Don’t try to soothe the tears. Do not try to silence the anger. Sit with it,” she said.

After the uprising in Ferguson, Missouri that followed the shooting of Michael Brown, a young black man who was shot and killed by a police officer, Chatelain spent a lot of time talking to communities about the unrest.

But at the end of the day, she said her main takeaway was that “a woman lost her son, a man lost his son, a group of people lost a member of their community, and they were angry and sad about it.”

“The people we love, that we care about so much, when we say goodbye to them in the morning, we all want them to return to us. And in this country, because of the color of your skin, because of your sexual identity, because of your gender, there is a possibility that you will not return,” she said.

“So much of our Christian teaching is about the joy of Jesus’s return…and if we could connect to the idea that we just want the people we love to come back to us, then perhaps we would have a more humane approach to these questions.”