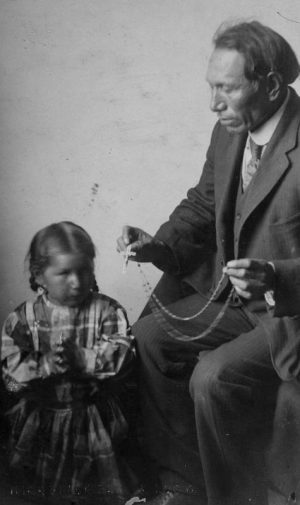 Nicholas W. Black Elk is pictured in an undated historical photo teaching a girl how to pray the rosary. (CNS photo/courtesy Marquette University)

BALTIMORE (CNS) — The U.S. bishops voted Nov. 14 to move forward the sainthood cause of Nicholas W. Black Elk, a 19th-century Lakota catechist who is said to have introduced hundreds of Lakota people to the Catholic faith.

At the annual fall assembly of the U.S. Conference of Catholic Bishops in Baltimore, the bishops “approved by voice vote the canonical consultation,” or support for the cause. The episcopal consultation process is “a step in the Catholic Church’s process toward declaring a person a saint.”

Bishop Robert D. Gruss of Rapid City, South Dakota, spoke to the bishops about Black Elk, born into the Oglala Lakota Tribe in 1863 in Wyoming.

“He was widely known among his people as a holy man and mystic,” Bishop Gruss said. “He was given a vision at a very early age.”

The message of that vision was that “we should all live as one.”

He took the name Nicholas, after St. Nicholas, the bishop said, and was baptized on his feast day.

“He became a noted catechist and missionary, working closely with the Jesuits on a number of Indian reservations,” Bishop Gruss said. “He continued celebrating Lakota rituals (and also) fully embracing Catholic life, grounded in the sacramental life of the church.”

He was a witness to Battle of the Little Big Horn in 1876 in Montana Territory and the great massacre of his people at Wounded Knee in South Dakota, the bishop said.

“With little formal schooling, he learned to read and write and the sacred Scriptures became his friend,” Bishop Gruss said. He said to have educated more than 400 of his people about the Catholic faith, and many were baptized during his 40 years of his life as a catechist.

“As we know, catechists were the lifeblood of the early faith communities of the Lakota people, leading others to conversion,” Bishop Gruss said.

“Black Elk, Catholic, husband, father and elder, he was an ardent catechist and an internationally admired mystic,” he said, and the missionary disciple that Pope Francis calls others to be.

NEXT: Bishops to put together pastoral plan for marriage, family life ministry