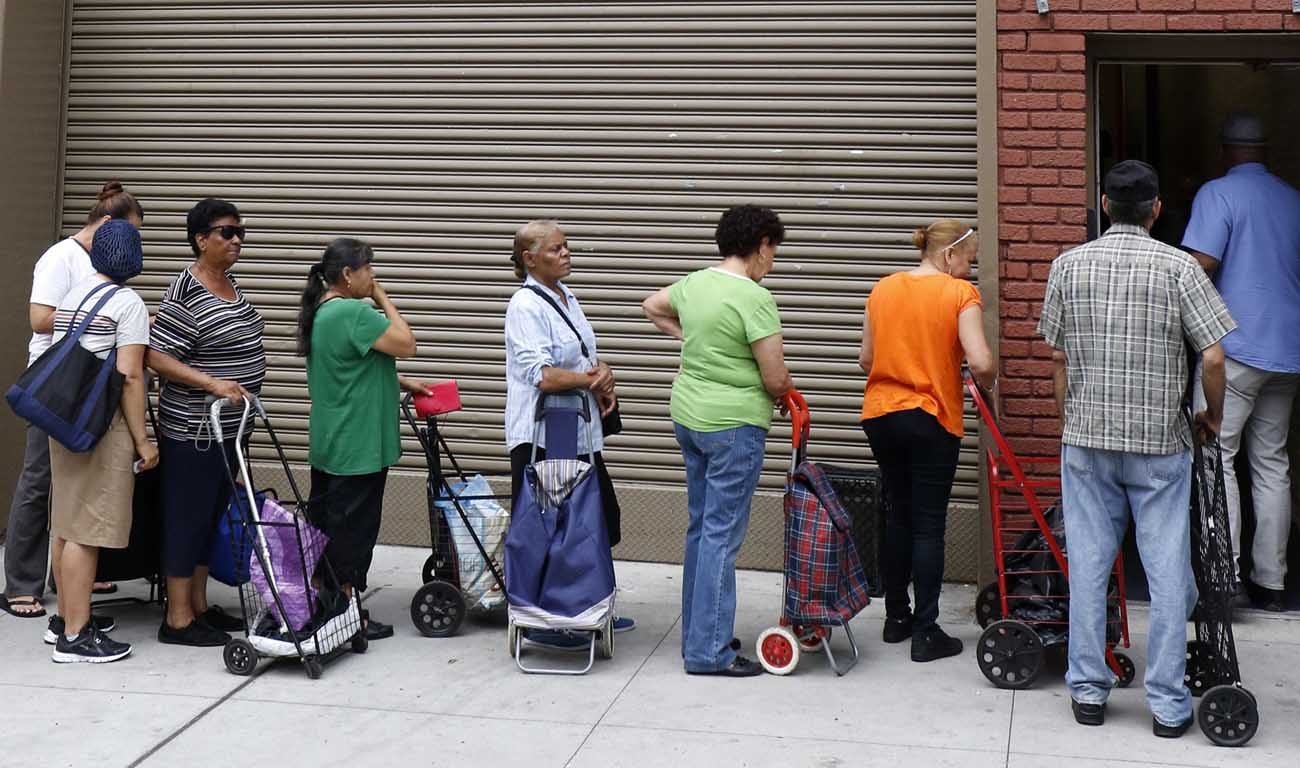 People wait to enter a food pantry at Catholic Charities of the Archdiocese of New York's community center in the South Bronx July 14, 2016. The chairmen of the U.S. bishops' committees on domestic policy, international policy and education said in a Nov. 9 letter to lawmakers that the current draft of the House of Representatives tax reform bill raises income taxes on the working poor and gives a large tax cut to the wealthy. (CNS photo/Gregory A. Shemitz)

UPDATED – WASHINGTON (CNS) — The Tax Cuts and Jobs Act of 2017 “is unacceptable” as currently written and it “contains many fundamental structural flaws that must be corrected,” said the chairmen of three committees of the U.S. Conference of Catholic Bishops.

In a Nov. 9 letter to U.S. House members, the three bishops called for amendments to the current draft of the tax reform bill “for the sake of families” and “for those struggling on the peripheries of society who have a claim on our national conscience.”

The letter does not address the Senate tax reform plan introduced as the bishops’ letter was on its way to House members. The plan has seven significant differences from the House bill, but senators continued to fine-tune details Nov. 10.

The USCCB continued to review the Senate proposal Nov. 10 and compare it with the House measure and did not have an immediate response to it.

Quoting St. John XXIII’s 1961 social encyclical, “Mater et Magistra,” they said that “decisions about taxation involve fundamental concerns of ‘justice and equity,’ with the goal of taxes and public spending ‘becoming an instrument of development and solidarity.'”

Because tax-policy is “so far-reaching,” Congress also must provide “ample time for Americans to discuss the complexities of these reforms and fully understand their effects,” they wrote.

“Doubling the standard deduction will help some of those in poverty to avoid tax liability, and this is a positive good contained in the bill,” the bishops wrote. “However, as written, this proposal appears to be the first federal income tax modification in American history that will raise income taxes on the working poor while simultaneously providing a large tax cut to the wealthy. This is simply unconscionable.”

The Nov. 9 letter referenced Bishop Dewane’s Oct. 25 letter to House members in which he offered moral guidelines for lawmakers to consider in any tax reform proposal. The guidelines focused on the country’s responsibilities to care for the poor; form and strengthen families; develop a progressive tax code; raise adequate revenues for the sake of the common good; avoid cuts to poverty programs to finance any tax cuts; and incentivize charitable giving.

The federal poverty line is $12,228 for one person and $24,339 for a two-parent family, the bishops noted, adding that nearly one in three Americans live in a family with income below 200 percent of the poverty line.

“No tax reform proposal is acceptable that increases taxes for those living in poverty to help pay for benefits to wealthy citizens, the bishops said.

They also said that the “Unified Tax Reform Framework” released Sept. 27, upon which the Tax Cuts and Jobs Act of 2017 is based, “promised that any new tax code would be ‘at least’ as progressive as the present code. This plan breaks that promise.”

The committee chairmen described as positive the tax measure’s provisions in the areas of education — “expanded access to schools of choice is a positive step” — and modest increases to child tax credits.

But at the same time, the bill places “new and unreasonable burdens on families,” and must be changed, the bishops said. They criticized elimination of among other things: the adoption tax credit and adoption assistance program exclusion; the personal exemption, which they said “will harm many larger families”; the out-of-pocket medical expenses deduction; and incentives to employees and employers dependent care assistance or child care.

The bishops’ letter also cautioned that the deficit could “be used as an argument to further restrict or end programs that help those in need, programs which are investments to help pull struggling families out of poverty.”

They called for fixes to the bill’s “disincentives” for charitable giving and for affordable housing and community revitalization development projects.

“Because tax policy is far-reaching, Congress must provide ample time for Americans to discuss the complexities of these reforms and fully understand their effects,” the bishops said. “The current timetable does not provide adequate time for that discussion.

“In many ways, this legislation is unacceptable in its present form and requires amendment,” the wrote. “It must be changed for the sake of families — the bedrock of our country — and for those struggling on the peripheries of society who have a claim on our national conscience.”