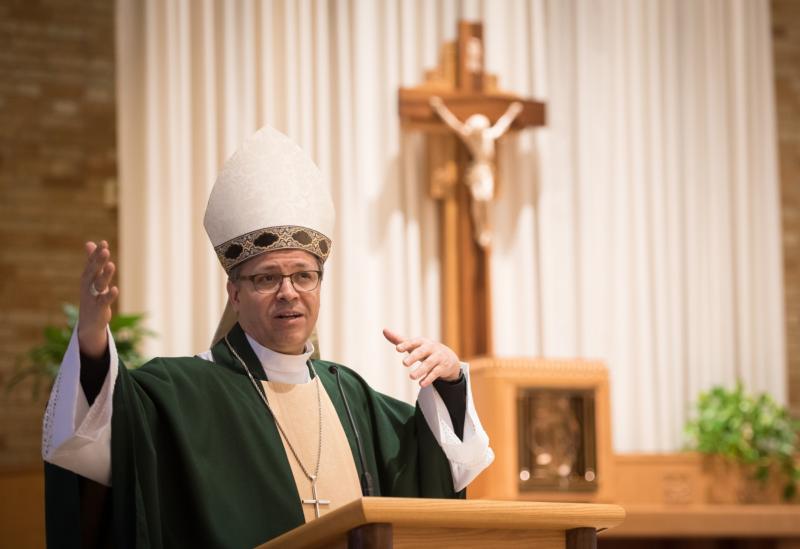 Chicago Auxiliary Bishop Alberto Rojas addresses encuentro participants in the Diocese of Green Bay, Wis., during his homily Oct. 22. The diocesan encuentro was part of ongoing preparations for the National Fifth Encuentro, or “V Encuentro,” to be held in 2018. Bishop Rojas is the lead bishop for V Encuentro’s Region VII. (CNS photo/Sam Lucero, The Compass)

ALLOUEZ, Wis. (CNS) — Increased vocations, Spanish-speaking priests and faith formation opportunities were some of the recommendations made by Hispanic Catholics attending the Diocese of Green Bay’s encuentro at the diocesan chancery.

More than 120 Hispanic Catholics representing eight parishes in the Diocese of Green Bay took part in an Oct. 22 daylong gathering, which is being repeated by dioceses across the country this fall and in early 2018.

The diocesan encuentros, or “encounters,” are part of the process leading to the U.S. Catholic Church’s Fifth National Encuentro, or “V Encuentro,” to be held next September in Grapevine, Texas.

The four-year process of reflection and pastoral planning began with developing and training parish encuentro teams, followed by parish gatherings and recommendations that lead to the diocesan encuentros.

The next step will be regional encounters in early 2018 that further define recommendations, then comes the V Encuentro.

The overall goal of V Encuentro, according to organizers, is to find ways to better respond to the growing Hispanic/Latino presence in the United States and prepare them to answer the call to the new evangelization as missionary disciples.

Carlos Hernandez, director of the diocesan Hispanic Ministry Office, told the group at the chancery that their efforts to organize and welcome other Hispanics as missionary disciples build upon Green Bay Bishop David L. Ricken’s pastoral plan, “Disciples on the Way.”

Small-group discussions throughout the day allowed those groups to discern their most important recommendations.

One of the outcomes of V Encuentro has been the development of Hispanic community leaders who have stepped forward to serve as parish encuentro organizers.

Among those leaders were Cesar Quiroz of St. Willebrord Parish and Marcello Flores of St. Philip Parish, both in Green Bay.

Quiroz, who was born in Peru and moved to the United States 13 years ago, said the Hispanic community’s growth in northeast Wisconsin requires better organization and utilization of talent.

Flores, who attended the gathering with his wife, Evangelina, and their children, Francisco and Kristina, spoke about how the church helped the family through medical challenges when Christina was born premature.

Flores, who arrived in Green Bay 17 years ago from Mexico, said his hope is that V Encuentro brings people closer together as family.

“For example in my case, we don’t have any family here and, when that happens, you don’t have many friends,” he said. “If I know somebody is in need of help, I can help him. We can try to live more in communion with people. That is the hope.”

Deacon Tony Abts, director of the diocesan Diaconate and Ministry Formation Department, which includes Hispanic ministry, told the group that the day’s event was historic.

“We have a tremendous opportunity today,” he said. “We are gathered together, all of us, who care about Hispanic ministry here in the diocese. … This is an opportunity to make some changes and make things better. It’s a time for creating a new vision for ministry through the diocese, including ministry to the Hispanic population.

“And there is a commitment from the diocese after this planning process to provide the resources necessary to make it happen,” he added.

Auxiliary Bishop Alberto Rojas of Chicago was in attendance along with other representatives from Region VII, which encompasses dioceses in Wisconsin, Illinois and Indiana. He is the only Hispanic bishop in Region VII and one of about 30 Hispanic bishops in the United States.

“I hope that something good is going to come out of the encuentro that will benefit the youth,” he said. “I think that 60 percent of young Latinos in the United States are born in the U.S. and they speak English probably more than they speak Spanish, so we want to focus our attention to them at this time. It’s one of the priorities of V Encuentro.”

Bishop Rojas acknowledged that the church needs to address why it is losing young Hispanics and said that need is vocations.

Later in the day, in his homily at Mass, Bishop Rojas reminded Hispanic families that religious vocations begin in the home. He encouraged parents and other adults to plant the seed in young people, to ask if they have considered the priesthood or religious life.

One of the day’s emotional moments took place as parish representatives listed their top two priorities.

A member of St. Thomas the Apostle Parish in Newton identifying himself only as Flavio P. said having priests who speak Spanish and providing financial resources for pastoral ministers were his parish’s recommendations.

He briefly shared his story as a recipient of the Deferred Action for Childhood Arrivals program, or DACA, and how his desire to first enter the seminary to study for the priesthood and later to study for the diaconate was thwarted because of his legal citizenship challenge.

“My question to the USCCB: What can you do for us?” he said in a quivering voice, referring to the U.S. Conference of Catholic Bishops, which advocated for immigrants regularly.

“It’s hard, the life of an immigrant,” said Flavio. “We want our voices to be heard because there are so many barriers. All we ask of the bishops is what can you do for us?”

After Communion at a Mass he celebrated with Bishop Rojas, Bishop Ricken thanked those gathered for the encuentro and said he would study their recommendations.

“I promise I will work with parishes and with you to strive to (respond to) what you have asked,” he said. “So together, with the power of the Holy Spirit, you and I can change this area.”