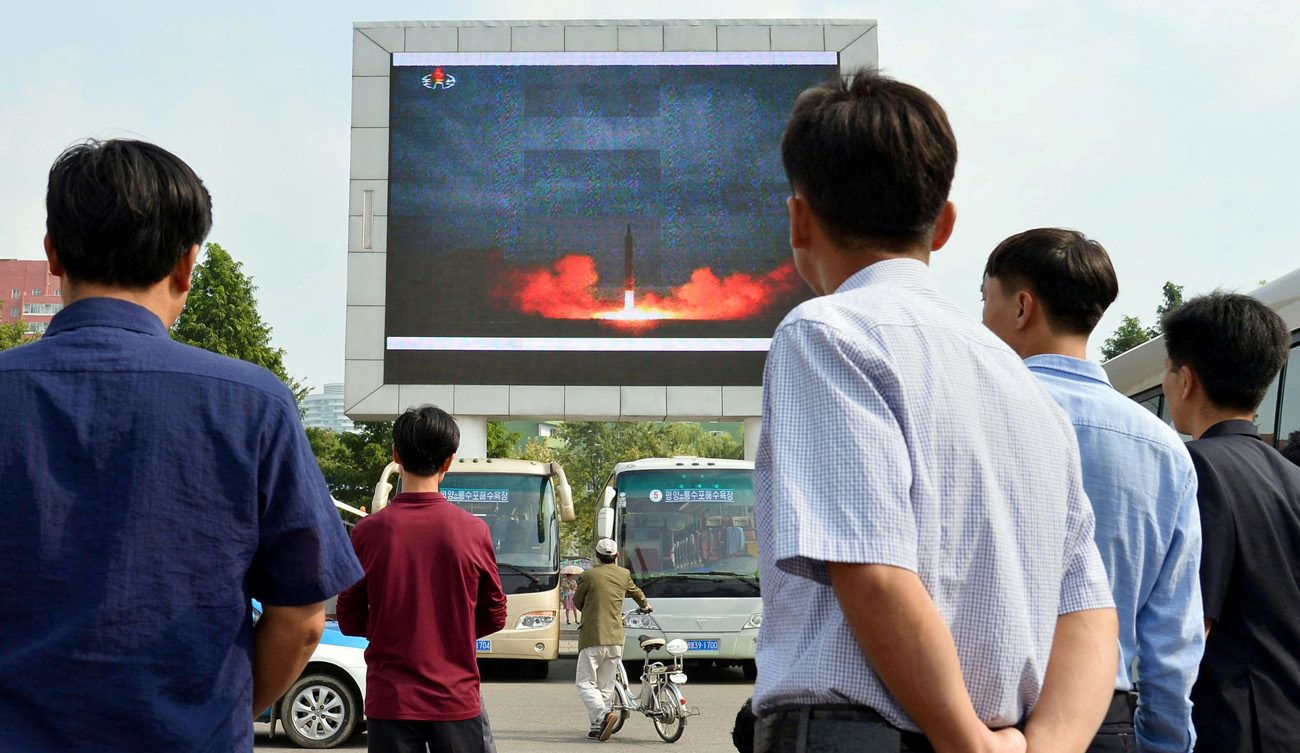 WASHINGTON (CNS) — Dialogue is the way to reduce tensions in the “hair-trigger” nuclear crisis between the United States and North Korea, agreed all three panelists Nov. 2 at a Georgetown University forum on the issue.

“If you keep it at a confrontational level, United States vs. North Korea, and keep the rhetoric hot, you know where that’s going to go,” said Chuck Hagel, a former U.S. defense secretary, Republican senator from Nebraska and Vietnam War veteran. “If you bring in others, that insulates the heat,” Hagel added. “The most successful agreements that have been reached since World war II are multiparty agreements.”

Hagel called for “diplomacy at the most basic level, of coming down and saying, ‘What do you want?'”

“We need to open the dialogue,” said Stephen Colecchi, director of the U.S. bishops’ Office of International Justice and Peace. “The only way to open up the relationship is by talking.”

“People have to have some skin in the game,” said Maryann Cusimano Love, an associate professor of international relations at The Catholic University of America, Washington. The task, she added, is “to build a more just, more sustainable peace” — not necessarily “a perfect peace,” but one that people can answer yes to the question, “Is this a peace that’s going to last?”

“What you get out of dialogue is dialogue,” Cusimano Love said. “You get learning, you get information.” North Korea, she added, is “actually interested in discussions. Even if they weren’t, all their neighbors are.”

Rather than a go-it-alone approach, Colecchi said multilateralism is critical. St. John XXIII, he said, “called for an international common good. No one’s going to get all they need by themselves.”

The panel was moderated by John Carr, director of Georgetown’s Initiative on Catholic Social Thought and Public Life, which co-sponsored the event with the university’s Office of Mission and Ministry.

North Korea has been conducting a battery of missile tests this year, which has led not only to heightened tensions in the region, but an exchange of insults between U.S. President Donald Trump and North Korean leader Kim Jong Un.

The stakes, though, are much greater than one-upmanship between two strong-headed leaders. Should the situation result in war, Hagel said, the cost will be the lives of “millions of South Koreans, and tens of thousands of Americans if we’re willing to pay the price to eliminate the threat,” not to mention “a flood” of North Koreans fleeing into China, already the world’s most populous country.

“South Koreans are engaged in this,” said Cusimano Love, author of the forthcoming book “Morality Matters: Ethics and the War on Terrorism.” “The new president of South Korea (Moon Jae-in) is a Catholic, and he has asked Pope Francis to engage.”

Cusimano Love said the “toolkit” needed to address the crisis is already in the Bible, quoting 2 Timothy 1:7: “The Lord did not give us a spirit of fear but a spirit of power and love, and of sound mind.”

Hagel reminded the audience that “the first half of the 20th century was the deadliest in the history of man,” with two world wars. Afterward, a “new world order” in which “America has dominated, and in many ways dictated,” has “lasted about 70 years,” he said.

“It’s worked pretty well,” he added, with more job opportunities, technological advances and “economic diffusion all over the world.”

North Korea, which Hagel said is “the most closed society” on the planet, keeps its citizens in the dark because leaders don’t want them to see the civil freedoms and economic benefits enjoyed by their estranged countrymen in South Korea.

Colecchi said the U.S. bishops had called for a review of the “authorized use of military force” law passed by Congress shortly after the 9/11 terror attacks in 2001, as it gives the president considerable power over whether to engage in war without prior consent by Congress. “We should certainly take nuclear weapons off the hair trigger,” he added.

Asked by a member of the audience what Trump should do during his visit to Asia that runs through Nov. 13, Hagel replied, “Listen and learn. Next question.”