Time to give back to retired religious for service to church, say honorees 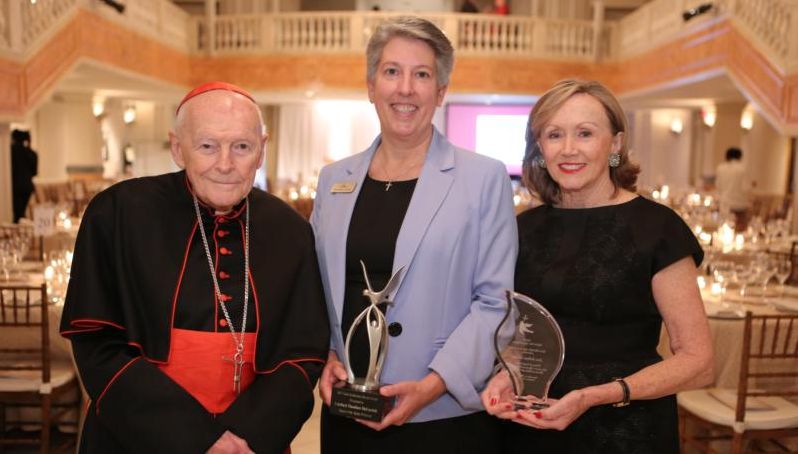 WASHINGTON (CNS) — The nation’s women and men religious demonstrate “what the Catholic Church is all about” in their lives of educating the nation’s youth and caring for the poor, the sick and immigrants, Cardinal Theodore E. McCarrick told a Washington audience Nov. 3.

“My life has been touched by religious women and men so often,” said the retired archbishop of Washington in accepting the St. Katharine Drexel Award from SOAR! at its awards dinner. The acronym stands for Support Our Aging Religious.

Cardinal McCarrick noted that he was taught by women religious and then by Jesuit priests as he was growing up, and later as a priest and bishop, he witnessed their range of services to those in need.

The 87-year-old cardinal lives at the Jeanne Jugan Residence in Washington operated by the Little Sisters of the Poor, where he said he has experienced their hospitality and goodness.

“We will never be able to thank” religious sisters, brothers and priests enough for their lives of service, Cardinal McCarrick said, noting that through their ministries they bring Christ to people and prepare them for life, to do “great things and small things” for others.

Reflecting on the vocations of women and men religious, the cardinal said, “It’s something you do if you love the Lord. This is the road you take to follow him.”

SOAR!’s St. Katharine Drexel Award honors individuals or organizations who have made significant contributions to the Catholic Church, especially to America’s men and women religious.

The award is named for the Philadelphia heiress who founded the Sisters of the Blessed Sacrament, who were devoted to serving Native Americans and African-Americans. She was canonized in 2000.

Jane Sullivan Roberts, a partner in a Washington law firm and member of the Church of the Little Flower in Bethesda, Maryland, received the group’s St. Elizabeth Seton Award.

In 1975, St. Elizabeth Seton became the first person born in the United States to be canonized. In the early 1800s, she founded a Catholic school that was the forerunner to the parochial school system in this country. The award honors people who have distinguished themselves through leadership and generosity in the Catholic community in the spirit of the saint.

Washington Cardinal Donald W. Wuerl, who offered the invocation at the dinner, praised his predecessor, Cardinal McCarrick, as a man who used his talents in serving those in need around the world, and who by his personal example “demonstrates what priestly life is all about.”

Cardinal Wuerl also praised Roberts’ service to the church, saying that she “gets good things done.” She has served on the board of the John Carroll Society, a group of Catholic professionals in the Washington area whose members are active in charitable outreach and spiritual programs.

Noting that as a youngster he had been taught by the Immaculate Heart of Mary Sisters, Cardinal Wuerl thanked religious communities, not only for teaching generations of students “to read and write and tell the difference between good and bad,” but also for establishing the first Catholic schools, hospitals and charitable institutions in communities across the country.

Sister Kathleen Lunsmann, a member of the Immaculate Heart of Mary Sisters, is president of SOAR! She thanked Catholics for their support of the group’s work.

In 2017, SOAR! provided $1.2 million in grants to 70 religious congregations across the United States, for services like updating fire alarm systems, renovating bathrooms and purchasing specialty hospital beds for aged religious.

“Congregations of men and women really now more than ever need our help in caring for aging members,” Sister Lunsmann said.

She noted that after hurricanes Harvey, Irma and Maria hit the United States and its territories, SOAR! provided $45,000 in emergency grants to religious communities serving in those areas.

In accepting her award, Roberts noted that two of her grandmother’s older sisters emigrated from Ireland to the United States with two brothers. The women worked as domestics and the men worked on the railroad to help save their family’s farm in Ireland.

Those two women later became Sisters of Charity in New York and “dedicated themselves to the service of God” after helping save the farm back home, she said.

Roberts, who grew up in the Bronx, noted that she was taught by the Presentation Sisters in elementary school, and then by the Sisters of Mercy at St. Catherine Academy, an all-girls Catholic high school.

The sisters taught her to pray and how to think, she said.

“They (the sisters) taught us we could do anything,” said Roberts, who is a partner and legal recruiter at the firm of Major, Lindsey & Africa in Washington. She is married to Chief Justice John G. Roberts Jr. The couple has a son and a daughter

She said the women religious also “imparted enduring truths, that God is good and loves me, and has a plan for me, and that we are all children of God, made in his image and likeness.”

Noting that those women and men religious worked for a stipend and now face growing costs for retirement and health care, she added, “We need to spread the word that now it’s our turn to help them.”