U.S. opioid epidemic affects not only addicts but families and budgets 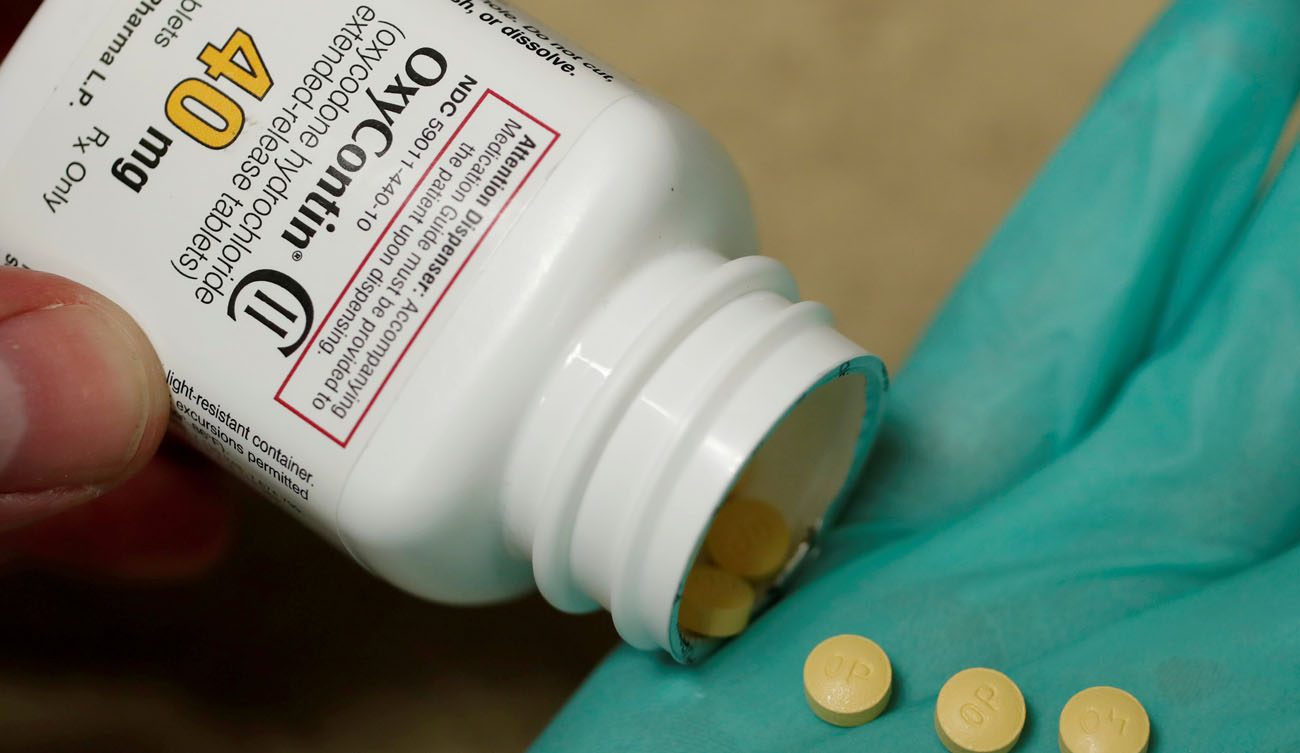 A pharmacist holds the prescription painkiller OxyContin in late April at a local pharmacy in Provo, Utah. The U.S. opioid epidemic affects not only addicts, but families and budgets. (CNS photo/George Frey, reuters)

WASHINGTON (CNS) — The opioid crisis may have sneaked up on the United States, but few would dispute President Donald Trump’s assertion that it is now a national emergency.

Trump made the formal declaration Oct. 26. But much needs to be done before the emergency becomes manageable.

An estimated 200,000 Americans have died from opioid overdoses since the pharmaceutical opioid oxycodone was introduced in 1996. The numbers continue to climb, and the fatal overdose rate continues to soar.

West Virginia, at the heart of Appalachia, has the nation’s worst rate at 41.5 deaths per 100,000 each year, four times the national average.

Appalachians were derided in the early years of the growing crisis for their growing dependence on prescription opioids, as the pills were called “hillbilly heroin.” Familiar drug brand names like OxyContin and Vicodin are in the same opioid class as heroin and fentanyl. More critically, the crisis has spread far beyond Appalachia.

Second to West Virginia among U.S. states is New Hampshire, according to 2014 statistics from the Centers for Disease Control and Prevention. In a Jan. 27 phone call to the president of Mexico about the need for a border wall to stop the drug flow, Trump called New Hampshire “a drug-infested den.”

The numbers cited by Kathryn Marchocki, communications manager for Catholic Charities of New Hampshire — the social service arm of the statewide Diocese of Manchester — hold scant promise for improvement any time soon.

“Every one of these deaths require toxicology to determine absolute cause of death,” she said, a process that takes eight weeks. “There’s quite a lot of backlog,” she added in an interview with Catholic News Service.

New Hampshire is seeing an increasing number of deaths from fentanyl, another legal opioid but one which experts believe is being illegally made in and shipped from China. Marchocki said a fentanyl analog, carfentanyl — intended, she noted, as an elephant tranquilizer — is “many times more potent than fentanyl” and showing up in more toxicology reports in the state.

Some jurisdictions have begun suing drug manufacturers and distributors for the expenses incurred by their budget-battered governments for autopsies, treatment and crime-fighting.

Cuyahoga County, Ohio, which includes Cleveland, filed suit Oct. 27 against some of the biggest pharmaceutical firms in the country: Purdue Pharma, Teva, Cephalon, Janssen, McKesson, Cardinal Health and AmerisourceBergen. It also named four doctors in the suit, saying they downplayed the addictive effects of opioids in studies funded by the drug makers.

The bipartisan President’s Commission on Combating Drug Addiction and the Opioid Crisis issued 56 recommendations Nov. 1. Among them: more drug courts; much greater access for providing treatment to addicts, including in jails; and better utilization of databases by physicians to prevent “doctor shopping” by addicts.

The commission, while it did not put a price tag on its findings, urged the government to use block grants to allow states to apply for just one grant to cover multiple initiatives. It also said the government should more closely track prevention, treatment and interdiction efforts. “We are operating blindly today,” its report said.

The White House said Oct. 26 that since April, more than $800 million has been distributed for prevention, treatment, first responders, prescription-drug monitoring programs, recovery and other care in communities, inpatient settings and correctional systems. Another $254 million has been awarded for high-risk communities, law enforcement and first-responder coordination.

The CDC also launched the Rx Awareness campaign, a multimedia awareness campaign featuring the real-life stories of people who have lost loved ones to prescription opioid overdose and people in recovery. At the same time, the Food and Drug Administration is imposing new requirements on the manufacturers of prescription opioids to help reverse the over-prescribing that fueled the crisis.

While Trump’s declaration of a national emergency lubricates some of government’s gears for more decisive action, it does not bring automatic money to the anti-opioid effort.

More funds to combat opioids had been in the Affordable Care Act repeal-and-replace bills earlier in the year. The figure had originally been $2 billion, but shot up to $45 billion after senators from states hard hit by the crisis urged more money. The $45 billion figure was reintroduced in a bill unveiled Oct. 25 by 14 Senate Democrats and Sen. Angus King, I-Maine. By comparison, the Comprehensive Addictions Recovery Act passed by Congress last year authorized just $1 billion over two years.

The Affordable Care Act “has begun to integrate the treatment of substance-abuse disorders into health care, so we are paying close attention to make sure that any changes to our health care system do not negatively impact our families and patients that need treatment for addiction,” Jessica Nickel, president and CEO of the Addiction Policy Forum, said Oct. 26 in Washington after the declaration of a national emergency.

Trump’s declaration, promised over the summer, hit a significant roadblock along the way. Rep. Tom Marino, R-Pennsylvania, his pick for federal drug czar, had to withdraw from consideration. His decision came after a joint Washington Post-“60 Minutes” investigation found he had collected nearly $100,000 in campaign contributions from drug companies after getting a bill passed that critics said weakened the Drug Enforcement Agency’s oversight over opioids as the crisis kept mounting.

Amid the crisis, Catholics are among those involved in anti-addiction initiatives, where the victories are hard-won.

Father Douglas McKay, founder and chaplain of Our House Ministries in Philadelphia for those suffering from addiction, emphasizes prayer, fellowship and the sacraments, particularly the Eucharist and confession. “They heal,” he told CatholicPhilly.com, the news website of the Archdiocese of Philadelphia. “The divine physician is the doctor for the mind and the soul.”

The ministry’s recovery homes provide shelter and structure for residents, who must attend Sunday Mass and weekly gatherings of the Calix Society, an international Catholic lay organization for participants in 12-step programs, for which Father McKay is the national chaplain.

Catholic Charities of New Hampshire launched “Families Coping With the Opioid Crisis” for family members dealing with an addicted loved one. Father John J. Mahoney Jr., director of Catholic Charities’ counseling services, said that in “attempting to resolve the epidemic,” it needed to treat not only the addict but also to “treat the family as well.”

Father Mahoney added, “We employ the Gospel model. Jesus didn’t sit in a clinic somewhere waiting for the sick of Palestine to come to him. He brought bread to the communities. … Pope Francis said the church should be a field hospital.”

There’s been no study to detail its effectiveness, but anecdotal evidence indicates the program is making an impact. “A lot of it entails tough-love measures. But it works, and mothers tell the children how they are in recovery, or the states of recovery,” Father Mahoney told CNS.

The program may be beset by its own popularity, according to the priest: “We’ve had invitations to come out and speak from about 40 parishes.”

Contributing to this story was Gina Christian in Philadelphia.

NEXT: U.S. Justice Department says it was misled in immigrant teen’s case