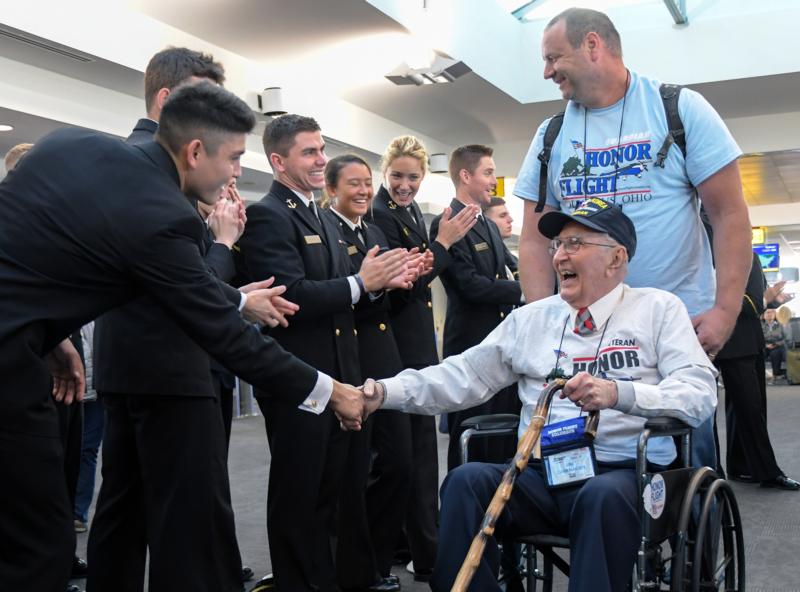 World War II Navy veteran Jim Cavanaugh, and his guardian, Scott Ray, are greeted by Naval Academy Midshipmen Oct. 21 at Baltimore-Washington Thurgood Marshall Airport in Baltimore. The flight’s arrival was the first of seven scheduled for “Super Saturday,” a day when four or more flights carrying veterans travel to the region for a day visit to Washington. (CNS photo/Kevin J. Parks, Catholic Review)

Well-wishers, volunteers and active military personnel cheered, waved flags and held thank-you signs. Many in a crowd that numbered hundreds deep reached out to shake the hands of beaming military veterans as they came off the airplane from Ohio Oct. 21.

The flight’s arrival was the first of seven scheduled for “Super Saturday,” a day when four or more flights carrying veterans travel to the region for a day visit to Washington.

Honor Flight Network is a nonprofit organization whose mission is to sponsor and coordinate trips for aging veterans to see the monuments built in memory of their dedication and sacrifice.

Charles R. Cole, a Purple Heart recipient, was overcome with emotion as his son, David Cole, rolled him in a wheelchair past the cheering crowd.

“My dad was shot five times, and now he has five kids,” said David Cole, his voice cracking.

The trip was vitally important to Robert Dunn Jr. The Vietnam War veteran was recently diagnosed with terminal cancer, and planned to make what would most likely be a final visit to see the grave of his father, Robert Dunn Sr., at Arlington National Cemetery.

David Branstetter, a Navy special operations sniper and multiple Bronze Star recipient who served in Vietnam, wore his green military utilities complete with a beret, combat boots and numerous ribbons, pins and patches spanning his 30-year career from 1961 to 1991.

Conts Booth served with the Navy Seabees at the Battle of the Coral Sea in the Pacific Theater during the Second World War. His grandson, Scott Mills, said his grandfather was making his first plane ride at age 101.

For veterans who traveled alone, Naval Academy midshipmen acted as their companions.

“You never know what they’ve gone through until you hear their stories,” said Naval Academy junior Evanne Gillert, one of the companions. 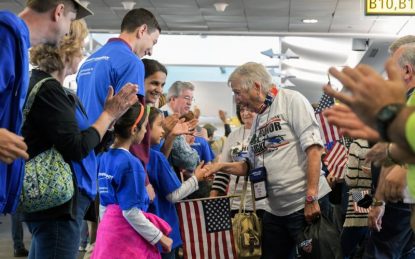 Gillert remembered a Korean War veteran she accompanied last year to Washington who cried when he found his friend’s name on the Korean memorial.

Carrie Carter, a member of St. William of York Parish in Baltimore, volunteers with the ground crew. She also volunteers with the United Service Organizations, or USO, welcoming home military personnel from Iraq, Afghanistan and other tours of duty.

Some 200 Honor Flights arrive at BWI between March and November, Carter said, with a break in the summer to avoid the intense heat.

“It makes me smile for the rest of my day no matter how bad it’s going,” she said of her service. “This is my passion.”

Carter was inspired to be a ground crew volunteer because of her former husband’s experience in Vietnam.

“We have a lot of bad memories,” Carter said, as she talked about how the aftermath of war took a toll on her marriage. It’s her objective to make sure all veterans feel welcome.

Taylor, the town crier who adds his talents to the arrival ceremonies, recalled an Honor Flight a few weeks before in which he met 91-year-old Marine veteran Judd Lebowitz, who served with the 4th Division, 23rd Infantry, F Company. From just yards away, Lebowitz told him, he had watched his countrymen raise the U.S. flag on Iwo Jima during World War II.

“I was awe-struck,” Taylor told the Catholic Review, Baltimore’s archdiocesan media outlet. “It was hard to imagine meeting someone like that.”

The arrival ceremony ended with the town crier ringing a hand bell as he led veterans to waiting tour buses near the baggage claim area. Approximately 100 Naval Academy midshipmen and military personnel saluted as the U.S. Park Police led the escort for the veterans.

“It’s all worthwhile,” Taylor said, acknowledging the smiles and tears evident on the faces of the veterans.

Parks is on the staff of the Catholic Review, the media outlet of the Archdiocese of Baltimore.

PREVIOUS: Catholic schools urged to include students with development disabilities

NEXT: Jesuit network marks 20 years of working toward a more just world