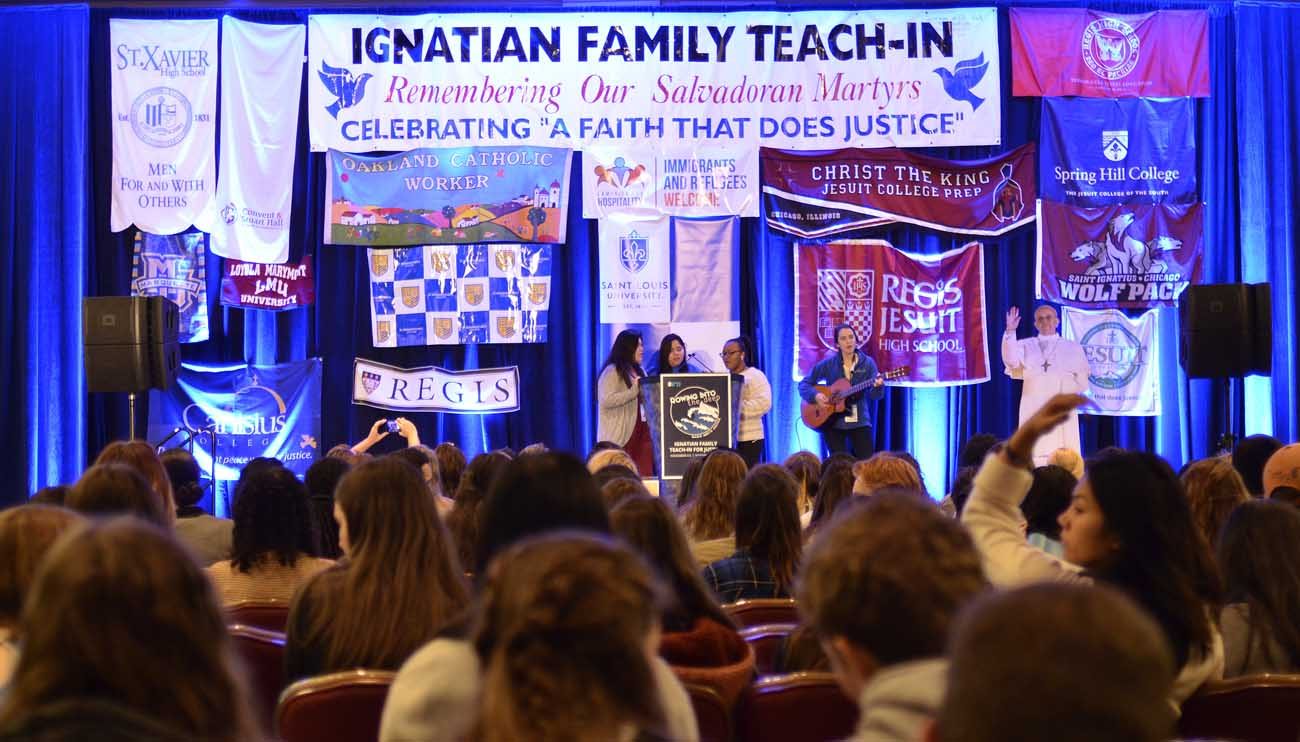 ARLINGTON, Va. (CNS) — Twenty years ago, a small group of Jesuits and their friends began gathering in Columbus, Georgia.

For a number of years, they had joined others at vigils and protests outside Fort Benning, Georgia, home of what was then called the School of the Americas, which trained soldiers from throughout Latin America.

Many of those soldiers were in death squads that spread death and torture among the rebel as well as the civilian population of El Salvador, which was experiencing a civil war in the 1980s and early 1990s.

In late 1989, more than a dozen paramilitary soldiers who had trained at the facility in Georgia opened fire at close range on six Jesuit priests, their housekeeper and her 16-year-old daughter on the grounds of the Salvadoran capital’s Jesuit university.

The grisly incident moved Jesuits in the U.S. and their friends to action. They wanted the public in the U.S. to know about the incident, but they also wanted to mobilize others to do something about it.

In that spirit, what is now known as the annual Ignatian Family Teach-in was born. From a small group that gathered under a tent in Georgia to protest U.S. training of those who terrorized innocent civilians, they now gather under a different kind of tent, a bigger one that accommodates more than 2,000 mostly young adults who descend each November at the convention space of a hotel in a Washington suburb.

Though most come from the United States, this year attendants from Canada, Mexico and El Salvador also attended the gathering.

“The intention has always been to look at the relevant issues of the day,” said Christopher Kerr, executive director of the Ignatian Solidarity Network, the national social justice education and advocacy group that organizes the gathering.

In a Nov. 5 interview with Catholic News Service, Kerr said that at the time of the first gathering, a major social justice issue was U.S. military intervention in Latin America. At the 2017 gathering, organizers offered Catholic speakers that tackled racism, immigration, climate change, socioeconomic inequality, prison reform and other forms of social exclusion.

Some of those exclusions, said Kerr, affect some of the young attendants, who are largely students on Catholic campuses, in high schools or universities.

“People are struggling to feel valued, to feel equal” at the moment, Kerr said.

At the gathering, they heard stories of those like Jose Cabrera, a student at Xavier University, a Jesuit institution in Cincinnati, who spoke on a panel about the difficulties he faces as someone who benefited from the Deferred Action for Childhood Arrivals program, which was rescinded by President Donald Trump in September. He called on Congress to pass DACA legislation; the program was created by executive order under President Barack Obama.

Like some 800,000 others who had a work permit and protection from deportation under DACA, Cabrera faces an uncertain future. Life is difficult even for those who temporarily benefited from DACA, he said, because they were never considered citizens and never were given a guarantee that they could stay in the country they call home. No one talks about the psychological difficulties they face, he said.

Under a provision called “advance parole,” Cabrera visited his grandparents in Mexico, a country he left at age 4, when his parents brought him across the border.

When he returned to the U.S., he told the audience, “as I’m driving back home, I saw the Cincinnati skyline. My first reaction was I’m home. This is where my home is. … When I got to Mexico, the village where I learned how to walk … I felt like a tourist.”

And yet, in the place he calls home, others insist otherwise, he said.

“That messes with you because your whole life, you’ve always thought ‘you’re an illegal immigrant, you don’t belong here, this isn’t your home.’ And when you go back to your ‘home,’ you are dying to get back, and you look at that skyline and look at your home. … You’re back into a society where you grew up.”

They also heard from Pamela Felipa Quintana-Salazar, a Michigan State student and parishioner at St. Mary’s Student Parish in Ann Arbor, Michigan, who tearfully recounted for the audience the experience of her mother and father being deported during a time when President Obama said the Immigration and Customs Enforcement agency would only deport people in the country illegally who had with criminal records.

First, her father was forced to leave the country, then her mother followed, taking with her the family’s youngest children.

“It’s just me in the house now, with all their belongings,” Quintana-Salazar said. “It’s hard losing both of your parents when all we wanted was to be the best that we could. … What would you guys do for your family, what would you do for your children?” so that they could have a better life, she asked.

At the beginning of the gathering, Jesuit Father Tim Kesicki, president of the Jesuit Conference of Canada and the United States, pointed out to those who attended that the name of the 2017 gathering, “Rowing Into the Deep,” was a reference to something Pope Francis had said in 2014, when the Society of Jesus, also known as the Jesuits, was holding an event marking the 200th anniversary of its restoration. The order was suppressed in the 18th century.

“He said, ‘The ship of the society has been tossed around by the waves and there is nothing surprising in this,'” Father Kesicki said, recalling the words of Pope Francis. “‘The night and powers of darkness are always near. It is tiring to row. You must be brave and expert rowers. Row into the deep.'”

Most people come out of a metaphorical storm or historical crisis and they say never again, Father Kesicki said.

“But Pope Francis said, ‘No, go back and row deeper.'”

Rowing into the deep means leaving safety, taking risks and “leaving everything into God’s hands when most of us would rather handle it ourselves,” said Father Kesicki.

The 2017 gathering, like previous ones, were about rowing deep into “the sea of social sin and injustice,” he said, which included taking a long look at a variety of injustices, with one of the most pervasive being racism and how it is a common factor in a variety of social ills in the United States. But it also meant figuring out what action to take as individuals or as a group, he said.

“We will pray and reflect, debate and study, act and advocate in response to great and pervasive injustices. These injustices harm the poor and vulnerable,” he said. “We come together, over (two) thousand of us because human suffering is so severe, and alone we can only do so much.”

NEXT: Bethany House a ‘retreat’ for women discerning consecrated life