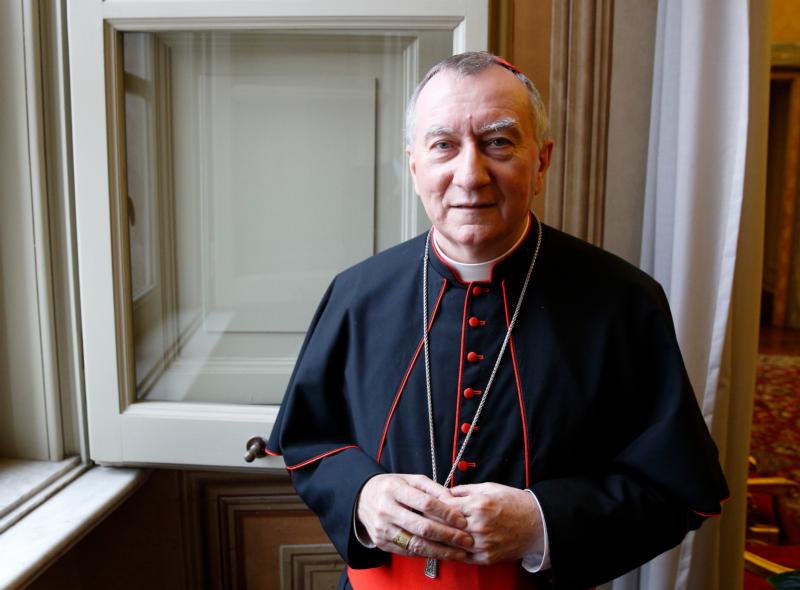 Cardinal Pietro Parolin, Vatican secretary of state, is pictured in the Apostolic Palace at the Vatican Nov. 9. (CNS photo/Paul Haring)

VATICAN CITY (CNS) — The role of the U.S. Conference of Catholic Bishops and other bishops’ conferences around the world is “catholic” — working together to promote the church’s mission, but also “to support peacebuilding and human development throughout the world,” said Cardinal Pietro Parolin, Vatican secretary of state.

Cardinal Parolin responded to written questions from Catholic News Service Nov. 10, just before he was scheduled to travel to the United States. He was to preside and give the homily at a Mass Nov. 12 in Baltimore marking the 100th anniversary of the U.S. Conference of Catholic Bishops.

The U.S. bishops’ conference began in 1917 as the National Catholic War Council to coordinate a common Catholic response to the need for military chaplains and relief efforts once the U.S. entered World War I.

“Although primarily concerned with coordinating the church’s pastoral activity in a specific area, bishops’ conferences are naturally concerned for the welfare of the entire church by virtue of the communion that unites bishops, and their particular churches, with one another and with the pope as the successor of Peter,” the cardinal said.

“This collegial spirit has always marked the United States Conference of Catholic Bishops, which began as a practical means of providing relief to those suffering the effects of the First World War,” he said. “Today, the conference continues to be ‘catholic,’ not only in its concern for the missions and the needs of our fellow Christians, especially those suffering persecution, but also, more generally, in its efforts to support peacebuilding and human development throughout the world.”

The 62-year-old Italian cardinal, a career Vatican diplomat, is Pope Francis’ top aide both for internal church matters as well as for relations with governments and international organizations. He also serves on the nine-member Council of Cardinals that advises the pope on church governance and the reform of the Roman Curia.

Asked about the state of U.S.-Vatican relations, particularly given the strong differences of opinion between Pope Francis and the Trump administration on issues like immigration and climate change, Cardinal Parolin responded, “It is not the first time a pope and a president have held differing views!”

In 2003, he recalled, St. John Paul II strongly sought to dissuade the United States under President George W. Bush and its allies from waging a war in Iraq, “which he qualified as an ‘adventure of no return.’ The conflict unfortunately occurred with dire consequences right up to the present.”

“What is important, however, is that although there can be differences, as in any healthy relationship, this does not undermine or compromise the bonds which unite us,” the cardinal said.

The U.S.-Vatican diplomatic relationship, he added, is “strong and solid,” and he looks forward to working with Callista Gingrich, the new ambassador to the Holy See.

In its diplomatic relations, he said, “the Holy See is an advocate of the common good and does not seek to promote particular interests or to oblige governments to follow its views. The values we defend are based on the Gospel and natural law; they are the values of the universal church.”

As for the renewed importance Pope Francis has given to bishops’ conferences, citing their teaching in his own major documents, Cardinal Parolin said that flowed naturally from the Argentine pope’s own experience on his national bishops’ conference and, especially, on the Latin America bishops’ council, CELAM.

Pope Francis’ vision “is essentially missionary, aimed at a renewal of ecclesial life at every level for the sake of a more incisive presentation of the Gospel message,” the cardinal said. “So it is natural that the Holy Father should place a high value on the work of national conferences in discerning the needs of the local churches and responding to important moral and social issues affecting their area.”

The pope also has called for greater collegiality and synodality in the Catholic Church, encouraging bishops to discuss matters openly, frankly and prayerfully in order to address modern problems, concerns and challenges.

The bishops’ conferences have an important role in that, the cardinal said. “Within an ecclesiology of communion, they can serve to build solidarity and enhance communication among the particular churches, while at the same time building communion and Catholic unity on the level of the universal church.”

Pope Francis, he said, “is convinced of the importance of initiating processes, making sure that all voices are heard, and exercising a farsighted discernment. We see this in his approach to the Synod of Bishops, and we see it in his approach to episcopal conferences and their working.”

In 1998, St. John Paul issued an apostolic letter, “Apostolos Suos” on the theological and juridical nature of bishops’ conferences. To many observers, it indicated a caution against conferences growing too large and appearing to usurp the authority of an individual bishop in his own diocese.

“Episcopal conferences have an essentially pastoral responsibility,” Cardinal Parolin said. “Needless to say, this activity must be carried out prudently and in a spirit of communion, both with the bishop members of the conference and with the larger church. I believe that time and experience are helping to clarify how this is best to be done in practice.”