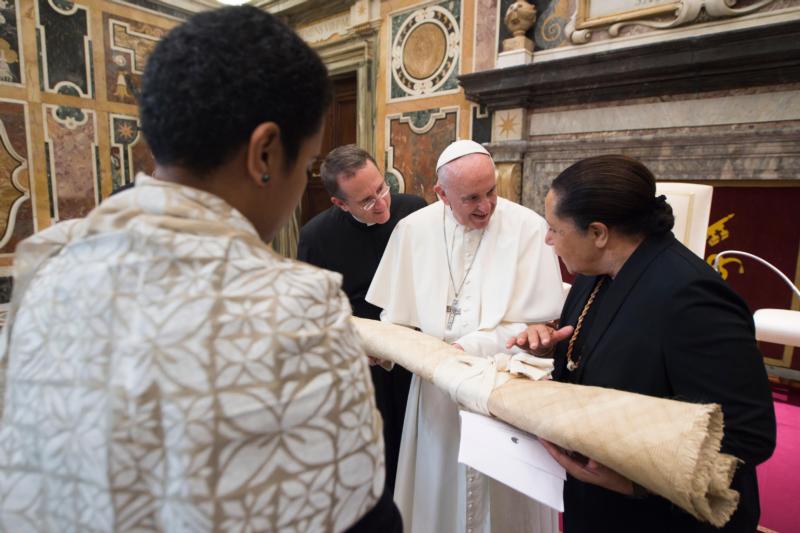 Pope Francis, meeting Nov. 11 with leaders of the Pacific Islands Forum, urged international cooperation to protect the environment and the world’s oceans. Representatives of the island nations met the pope as the U.N. was holding a climate change review conference in Bonn, Germany. (CNS photo/handout, L’Osservatore Romano)

The planet Earth, when viewed from space, is a world without borders, he said, and “it reminds us of the need for a global outlook, international cooperation and solidarity, and a shared strategy” when it comes to caring for the environment.

Such a shared approach “can prevent us from remaining indifferent in the face of grave problems such as the deterioration of the environment and of the health of the oceans, which is itself linked to the human and social deterioration experienced by humanity today,” he said.

The pope spoke Nov. 11 during an audience with leaders of the Pacific Islands Forum, an organization of 18 member nations, whose aim is to increase regional cooperation and its voice on the world stage.

The meeting also came as world leaders were meeting for the U.N. Climate Change Conference in Bonn, Germany, Nov. 6-15. There, governments were looking at how they could better meet the goals of the Paris Agreement, which aims to control global temperature increases by reducing greenhouse gas emissions.

Baron Waqa, the incoming chair of the Pacific Islands Forum and president of Nauru, told the pope that their island nations “are at the forefront of the impacts of climate change. The devastating impacts of cyclones, earthquakes and tsunamis in recent years have resulted in enormous losses for our smaller island economies, which have taken decades to build.”

Waqa praised the pope’s leadership in promoting the recognition that those who least contribute to greenhouse gas emissions often bear the brunt of the effects of climate change, and for his insistence on the inclusion of everyone in discussions and solutions.

The pope said he shared their concern and lamented the causes that “have led to this environmental decay,” which, “sadly, many of them are due to shortsighted human activity connected with certain ways of exploiting natural and human resources.”

“It is my hope that the efforts of COP-23, and those yet to come, will always keep in mind the greater picture of that ‘Earth without borders,'” the pope said.

“Not only geographic and territorial distances, but also distances in time are dissolved by the realization that everything in the world is intimately connected,” he said.