Authority comes from good example, not having the best title, pope says 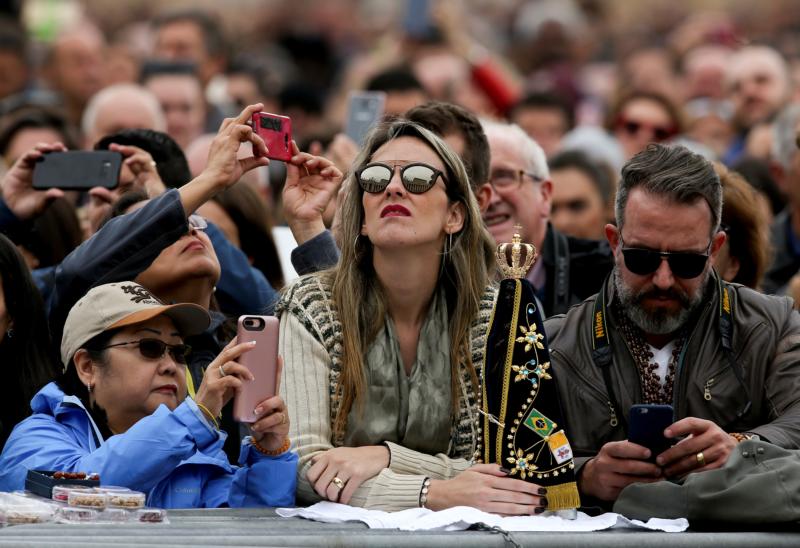 A woman looks up as as Pope Francis leads the Angelus Nov. 5 in St. Peter’s Square at the Vatican. (CNS photo/Alessandro Bianchi, Reuters)

VATICAN CITY (CNS) — Hypocrisy, like that of the scribes and Pharisees of Jesus’ time, is not the only temptation that continues to plague religious communities, Pope Francis said. Pride also is a great danger.

“We disciples of Jesus should not seek titles of honor, authority or supremacy,” the pope said Nov. 5. “I tell you, it personally pains me to see people who psychologically live running after the vanity of honors.”

Before reciting the Angelus prayer, Pope Francis spoke about the day’s reading from the Gospel of St. Matthew, in which Jesus tells the people to “do and observe” everything the scribes and Pharisees say, “but do not follow their example, for they preach but they do not practice.”

While Jesus severely criticizes the hypocrisy of the scribes and Pharisees, he also offers Christians today valuable lessons in leadership, the pope said.

“Brothers and sisters, a frequent defect in those who have authority, both civil and ecclesiastical authority, is that of requiring from others things, even correct things, that they, however, do not practice themselves,” the pope said. “They live a double life.”

The exercise of authority, he said, must draw its primary strength from good example.

The proper exercise of authority helps others grow in virtue, he said, “but when it is exercised badly, it becomes oppressive, it does not help people grow, and it creates a climate of mistrust and hostility and also leads to corruption.”

Jesus also denounces the scribes’ and Pharisees’ pride and vanity as seen in their love for places of honor and exalted titles, the pope said.

And, he said, if God has given a person special talents and abilities, “we must put them at the service of our brothers and sisters and not exploit them for our own satisfaction and personal gain.”

“We must not consider ourselves superior to others,” the pope said. “Modesty is essential for an existence conforming to the teaching of Jesus, who was meek and humble of heart and came not to be served but to serve.”