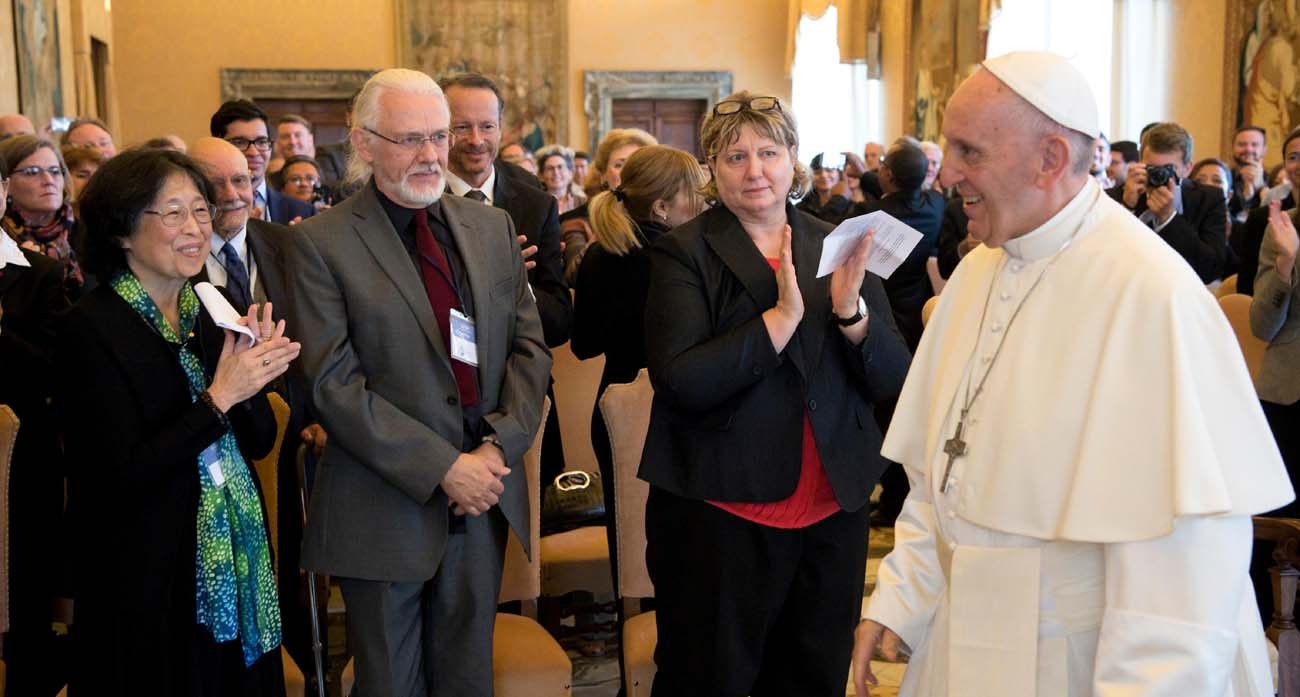 Pope Francis leads an audience with members of the International Federation of Catholic Universities at the Vatican Nov. 4. The pope encouraged Catholic universities to study the root causes of migration. (CNS photo/L'Ossservatore Romano)

VATICAN CITY (CNS) — Catholic universities need to study the root causes of forced migration and ways to counter the discrimination and xenophobic reactions it provokes in so many traditionally Christian nations, Pope Francis said.

“I would also like to invite Catholic universities to teach their students, some of whom will become leaders in politics, business and culture, a careful reading of the phenomenon of migration from the point of view of justice, global co-responsibility and communion in cultural diversity,” he said.

The pope made his remarks during an audience Nov. 4 with members of the International Federation of Catholic Universities, who were attending a world congress in Rome Nov. 1-4 titled, “Refugees and Migrants in a Globalized World: Responsibility and Responses of Universities.”

Pope Francis praised the organization’s efforts in the fields of research, formation and promoting social justice.

He called for more study “on the remote causes of forced migrations with the aim of finding practical solutions” because people have a right to not be forced to leave their homes.

“It is also important to reflect on the basic negative — sometimes even discriminatory and xenophobic — reactions that the welcoming of migrants is provoking in countries with a long-standing Christian tradition” in order to develop programs and ways to better form consciences, he said.

Pope Francis also called on Catholic universities to develop programs that would allow refugees living in camps and holding centers to take distance-learning courses and to grant them scholarships.

Efforts also are needed, he said, to recognize the academic degrees and qualifications migrants and refugees have earned in their homelands so that their new countries may better benefit from their knowledge.

Catholic universities, as leaders in promoting the social good, must do more, he said, for example, by encouraging students to volunteer to assist refugees, asylum seekers and immigrants.

NEXT: Authority comes from good example, not having the best title, pope says