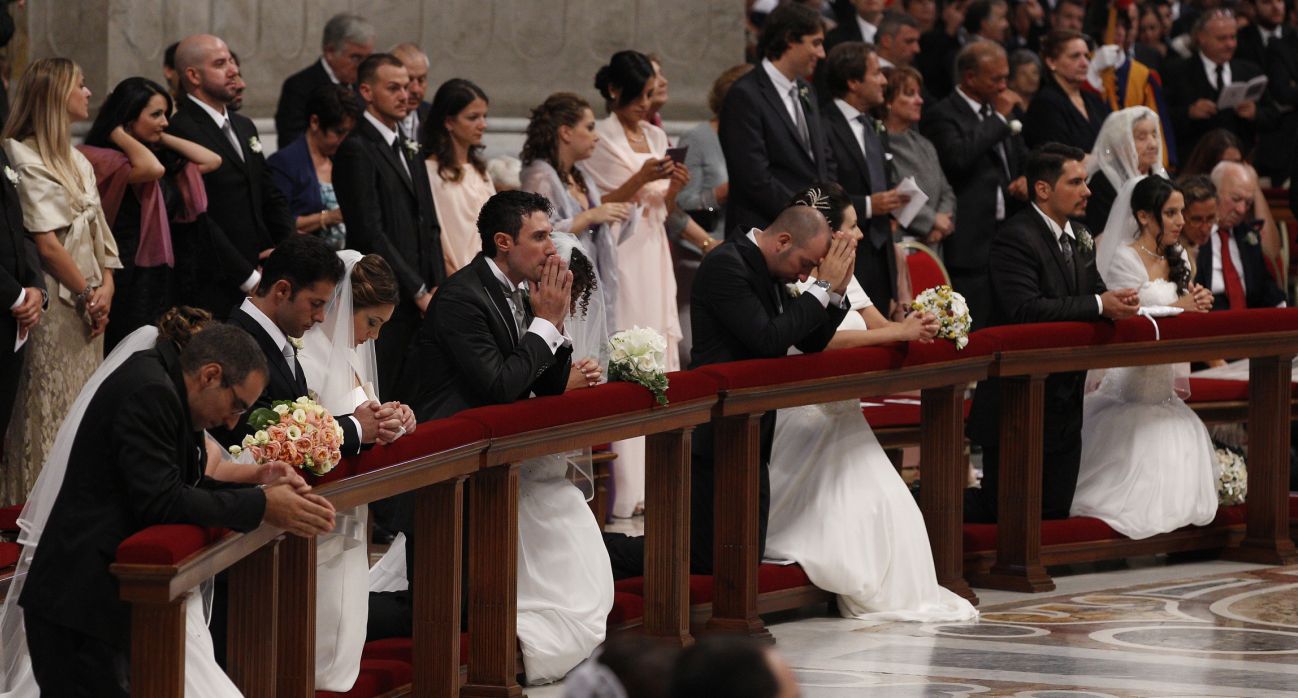 Newly married couples kneel as Pope Francis celebrates the marriage rite for 20 couples during a Mass in St. Peter's Basilica at the Vatican in this Sept. 14, 2014, file photo. (CNS photo/Paul Haring)

VATICAN CITY (CNS) — Marriage and family life are blessings for individuals and for society, but both are filled with difficult choices that Catholic couples must be helped to face prayerfully and in the light of their consciences, Pope Francis said.

Unfortunately, too many people today confuse a rightly formed conscience with personal preferences dominated by selfishness, the pope said in a video message to an Italian meeting on “Amoris Laetitia,” his exhortation on the family.

“The contemporary world risks confusing the primacy of conscience, which is always to be respected, with the exclusive autonomy of the individual” even when the individual’s decisions impact his or her marriage and family life, the pope said.

Repeating a remark he had made to the Pontifical Academy for Life, Pope Francis said, “There are those who even speak of ‘egolatry,’ that is, the true worship of the ego on whose altar everything, including the dearest affections, are sacrificed.”

Confusing conscience with selfishness “is not harmless,” the pope said. “This is a ‘pollution’ that corrodes souls and confounds minds and hearts, producing false illusions.”

The conference sponsored by the Italian bishops’ conference was focused on “conscience and norm” in Pope Francis’ apostolic exhortation.

Diagnosing problems in the church’s outreach to married couples and families, Pope Francis had written, “We have long thought that simply by stressing doctrinal, bioethical and moral issues, without encouraging openness to grace, we were providing sufficient support to families, strengthening the marriage bond and giving meaning to marital life.”

“We also find it hard to make room for the consciences of the faithful, who very often respond as best they can to the Gospel amid their limitations, and are capable of carrying out their own discernment in complex situations,” he wrote in “Amoris Laetitia.” “We have been called to form consciences, not to replace them.”

In his message to the meeting Nov. 11 in Rome, Pope Francis said the Catholic Church must strengthen its programs “to respond to the desire for family that emerges in the soul of the young generations” and to help couples once they are married.

“Love between a man and a woman is obviously among the most generative human experiences; it is the leaven of a culture of encounter, and introduces to the present world an injection of sociality,” he said.

“In the domestic reality, sometimes there are concrete knots to be addressed with prudent conscience on the part of each,” he said. “It is important that spouses, parents, not be left alone, but accompanied in their commitment to applying the Gospel to the concreteness of life.”

Conscience, he said, always has God’s desire for the human person as its ultimate reference point.

“In the very depths of each one of us, there is a place wherein the ‘Mystery’ reveals itself, and illuminates the person, making the person the protagonist of his story,” he said. “Conscience, as the Second Vatican Council recalls, is this ‘most secret core and sanctuary of a man. There he is alone with God, whose voice echoes in his depths.'”

Each Christian, the pope said, must be “vigilant so that in this kind of tabernacle there is no lack of divine grace, which illuminates and strengthens married love and the parental mission.”

NEXT: Keep lamp of faith alive with oil of charity, pope says