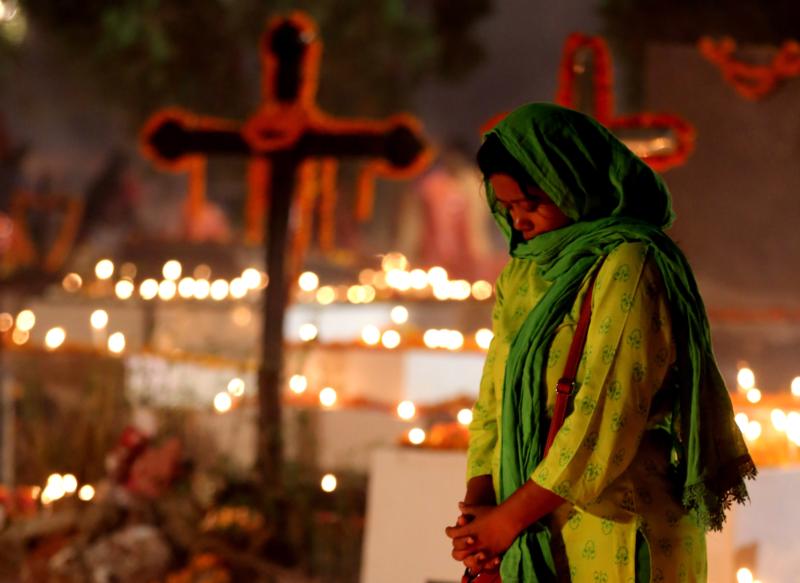 An Indian Christian woman prays Nov. 2, All Souls’ Day, at a cemetery in Bhopal. A Catholic bishop has sought protection for the Christian community in the central Indian state of Madhya Pradesh after Hindu nationalists marched through the streets waving burning torches and denouncing missionaries. (CNS photo/Sanjeev Gupta, EPA)

SAGAR, India (CNS) — A Catholic bishop has sought protection for the Christian community in the central Indian state of Madhya Pradesh after Hindu nationalists marched through the streets waving burning torches and denouncing missionaries.

The marchers on Nov. 10 accused Sagar district authorities of not acting upon complaints they filed against missionaries for violating a law that restricts religious conversions. They said if the administration failed to act within two weeks, they would start an indefinite strike in front of a Catholic-run orphanage in the area.

Ucanews.com reported the trouble in Sagar started in September after government officials evicted a Catholic priest working in the orphanage and closed a 20-year-old mission following a dispute over the land title. Church leaders say the government action was instigated by Hindu groups.

The leaders of the fundamentalist religious awakening co-ordination committee, which organized the march, told media that the church’s social services and work in education and health care are all a facade to convert gullible people to Christianity.

The protesters said they were working with the government for a national law against religious conversions and to check missionary activities. Madhya Pradesh and five other Indian states already have laws that make religious conversion through allurement and force illegal.

“We are under tremendous pressure,” said Bishop Anthony Chirayath of Sagar, who submitted a memorandum to district officials and the state chief minister and governor seeking their intervention for the protection of Christians.

Ucanews.com reported the bishop wanted the administration to take immediate steps to end this “false and malicious campaign” in the media that projects Christians as “out to convert Hindus, violating laws.”

“Our number has not grown in years. Still, we are accused of converting people,” he said.

The district has only 5,000 Christians among its 2.3 million people, 92 percent of whom are Hindus. In the predominantly Hindu state, Christians form less than 1 percent of the 72 million population.

Christian leaders say the state, run by the pro-Hindu Bharatiya Janata Party, has been tacitly supporting violence against Christians orchestrated by Hindu nationalists, pushing to establish a Hindu-only nation in India.

Missionaries in the diocese say the campaign by hardline Hindu activists has made their work increasingly difficult as villagers view them as criminals.