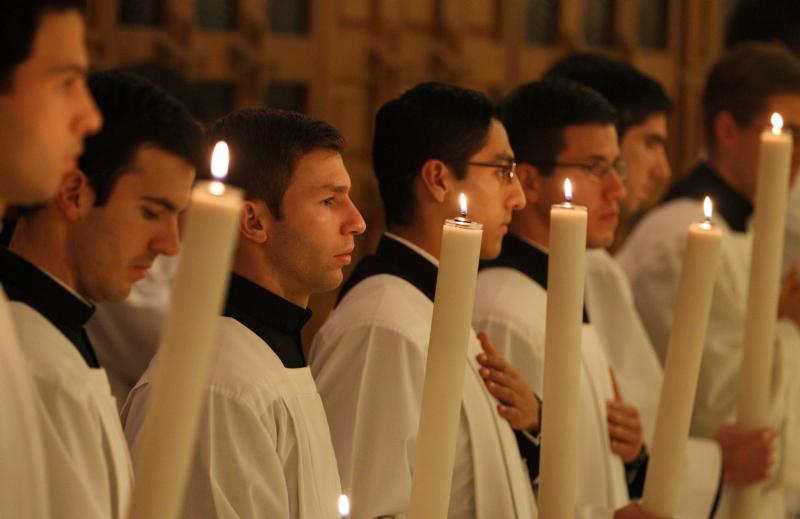 Members of the Legionaries of Christ hold candles as they serve at a 2014 Mass to open the general chapter of their congregation in Rome. The Legionaries say a series of offshore accounts opened by its disgraced founder, and exposed by investigative journalists examining a cache of documents shining a light on tax havens, have been closed.(CNS photo/Paul Haring)

MEXICO CITY (CNS) — The Legionaries of Christ say a series of offshore accounts opened by its disgraced founder — and exposed by investigative journalists examining a cache of documents shining a light on tax havens — have been closed.

The order added that the accounts never violated any laws and did not handle the vast sums of money alleged in the investigation.

“The offshore entities that existed with some relation to the congregation and its members were operated legally and never were companies used for illicit activities, as some journalistic articles affirm,” the Legionaries said in a statement.

The statement also attempted to pin the blame for the accounts’ existence on the wealthy order’s founder, the late Father Marcial Maciel Degollado, who led a double life in violation of Catholic teaching, included fathering children and sexually abusing seminarians. Father Maciel died in 2008 after being ordered to lead a life of prayer and penance, and the Legionaries of Christ was put under Vatican leadership, which started the process of cleaning up the order’s finances and closing the offshore companies.

The order previously had companies established in Bermuda, the British Virgin Islands, the Channel Islands, Panama and Luxembourg.

The revelations of the Legionaries activities came from the so-called Paradise Papers, in which a consortium of international journalists combed through a trove of leaked information on offshore companies.

An investigation by Mexicans Against Corruption and Impunity, a Mexican anti-graft group, showed the Legionaries of Christ had established a Bermuda-based company called International Volunteer Services.

In its statement, the order said International Volunteer Services “did not handle economic funds.”

“The educational projects related to the congregation operate with transparency, have their accounts audited and observe the legal and fiscal provisions of their respective countries,” the Legionaries statement said. “They do not have any relation or operations with offshore companies.”

“These universities generated a lot of money,” he said. “We had access to the financial statements of the Legionaries of Christ’s universities, and they generated $300 million per year.”

Why the offshore companies were created remains uncertain. Olmos said some think International Volunteer Services handled the funds generated by the Legionaries’ private schools, which operated in various countries.

“There would be no other reason than this motive,” he said, adding that priests’ names also appeared in the documents.

All the Legionaries’ offshore companies had been closed by the fall of 2017, Olmos said.

The Legionaries said in its statement that an outside review of its finances in 2014 had found no irregularities.