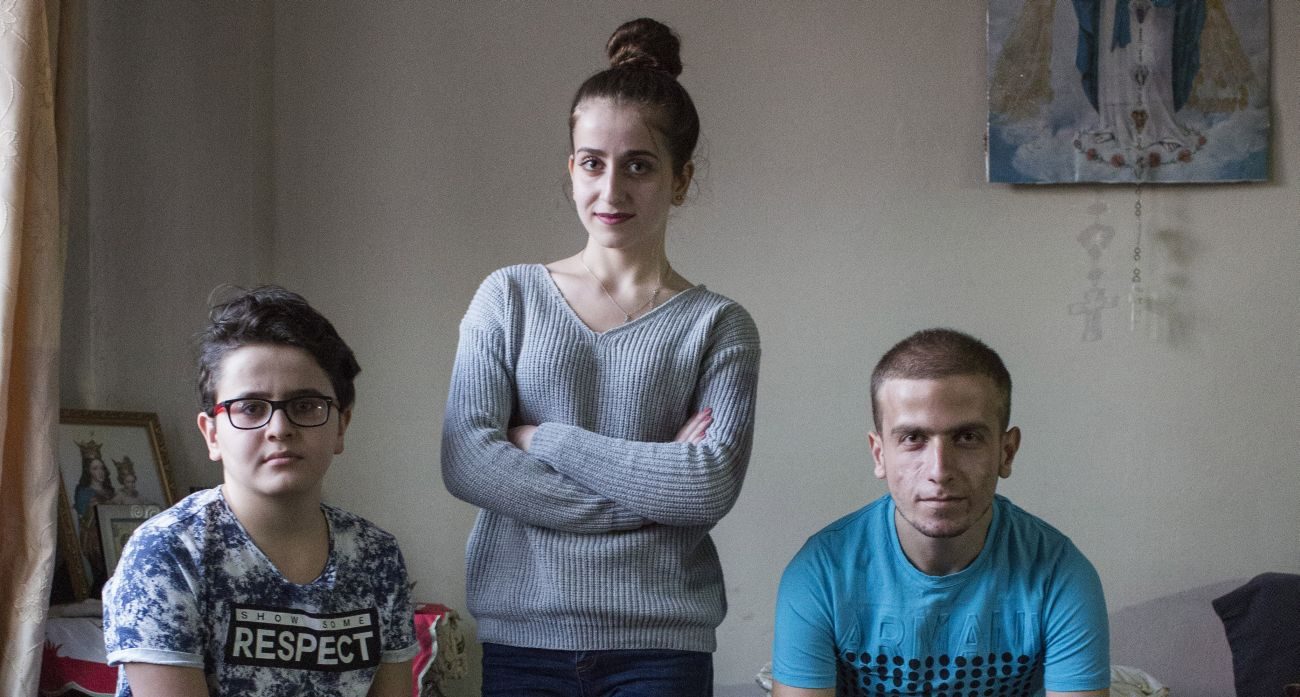 Yusuf, 12, Reeta, 17, and Fadi, 19, pose Oct. 13 at their home in Istanbul. They arrived in Turkey from Iraq more than two years ago and have not attended a formal school. (CNS photo/Oscar Durand)

ISTANBUL (CNS) — In Iraq, Reeta, 17, was used to being first in her class. An eager student, she would wake up at 3 a.m. to review the previous day’s lesson and prepare for the next day.

But life here is different. Reeta and her family are refugees, and she does not attend school.

“I still wake up at 3 sometimes, but I just look at my phone to check the time,” Reeta said. “Sometimes I pray and sleep again.”

Reeta is among some 43,000 Iraqi Christian refugees living in Turkey. Community members say an overwhelming majority of their children do not go to school while families wait for a decision about their resettlement claims. The relocation process could end up taking years, leaving children without education for just as long.

Reeta and her family came to Turkey fleeing violence and persecution from the Islamic State in their hometown of Mosul, Iraq. Reeta had just completed the ninth grade and was starting to think about her future.

For Iraqi Christians, Turkey represents a stop on the way to a new life in countries such as Australia, Canada and United States, where Iraqi communities are already well established. Although children have the right to education and resources exist, most families say they do not see the point of sending the children to school in Turkey, a Muslim-majority country where they do not speak the language. Most families hope for a quick transition.

Refugee advocate organizations encourage children to go to school no matter the length of their stay in Turkey. They say attending school will help children better integrate into a new education system after relocation and help them heal from the effects of displacement.

After arriving in Turkey in August 2015, Reeta’s parents did not think of sending her and their two other children, Fadi, 19, and Yusuf, 12, to school. They thought school could wait until they reached their destination country. During the first few months they were busy navigating basic refugee procedures, going back and forth to different cities for appointments and paperwork.

“We didn’t expect that we would stay more than two years,” Ferdos Toma, Reeta’s mother, says. “But it has been more than that, and we are still here.”

More than 20 years ago, when Iraqi refugees first started arriving in Istanbul, the Salesian Fathers opened the Don Bosco Youth Center. The center is sustained by donations and allows families to send their children there for free. Today it houses some 120 students, 90 percent of whom are Iraqi Christians.

“What we are trying to make sure of is that these children don’t lose the habit of going to a school,” said Salesian Father Andres Calleja Ruiz, who heads the center. “They have to come every day; here is a schedule, and we give them homework.”

Although the youth center has the look and feel of a school, it is not one. The document students receive at the end of the year is not replacement for a diploma.

Father Calleja said the center’s goal is not necessarily to follow a knowledge-based curriculum, but to keep children out of the streets while teaching them human values.

“We also have many subjects that are not only educative, but also therapeutic. We want (students) to be able to express themselves through sport, music, drawing, art and theater,” Father Calleja said.

The center also puts a strong emphasis on teaching English, the language students will most likely speak once they leave Turkey.

But Reeta, a Chaldean Catholic who attended the youth center for more than a year, said, “In Don Bosco I was not learning anything new.”

She said that while she was satisfied with her teachers, many of her classmates did not take the lessons seriously. Some students would miss class several times a week, she said, and others would not be focused even when they did show up. The mix made for an environment where she felt she was not learning.

Now Reeta attends church every Sunday and is a member of the choir. Most of her weekdays are spent at home, messaging friends on her smartphone. Some have already reached countries like Australia, Canada and the United States and have enrolled in high schools in their new homes.

“They didn’t know anything about English (when they left Turkey),” she said. “But they learned because the teaching there is good, and the other students are friendly.”

Father Remzi Diril, known as Father Adday, is a Chaldean Catholic priest working closely with Iraqi refugees in Turkey. Though based in Istanbul, he travels weekly to visit communities all over the country.

Father Adday said Christian refugee children sometimes fall victim to harassment and beatings by fellow students in more conservative areas of the country. But he warned against assuming those children are being singled out for their religion. He believes a lack of diversity in central Turkey’s more isolated cities means locals have less experience with people from other backgrounds.

On Sept. 27, Basima Kamil, her husband and her four children — ages 16 to 23 — boarded a plane to Canada, ending an almost five-year stay in Turkey. Kamil was a teacher at Don Bosco Youth Center for four years.

Her children arrived in Turkey before completing school in Iraq. Now in Canada, they are restarting their education.

“The thing I feel most sorry about is that I didn’t send my children to school in Turkey and they didn’t take English courses immediately when we arrived,” Kamil said. Her youngest child, Mena, 16, began ninth grade during the last week of September. Had she stayed in Iraq, she would have been starting 11th grade instead.

Father Calleja said many parents could do more for their children’s future while waiting in Turkey.

“I understand that they have problems, stress,” he said. “It is not easy waiting in a place without work, but they should … at least get their children to practice math … and to study.”

Meanwhile, Reeta and her two siblings are still waiting in Turkey and, although she is not enrolled in school, she said she feels the time spent in limbo is giving her other tools.

“I am learning to be strong,” she said. “Sometimes I cry because I am here and feel like I have no future … but I learned to be strong because nothing will last forever; one day we will leave here for somewhere else.”