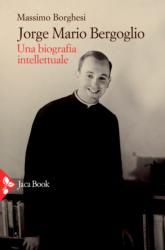 VATICAN CITY (CNS) — The “snobbery” of some self-professed intellectuals who seem to think Pope Francis does not have the philosophical and theological prowess to be pope, and the writings of Pope Francis that seem to echo the work of Father Romano Guardini gave Italian philosopher Massimo Borghesi an idea.

The professor of philosophy at the University of Perugia said he set out to write an “intellectual biography” tracing the formal education and study that laid the foundation for the “thought” of Pope Francis.

The result is “Jorge Mario Bergoglio: An Intellectual Biography. Dialectics and Mysticism,” set for release Nov. 9 by the Italian publisher Jaca Book.

Writing Nov. 7 in the Vatican newspaper, Borghesi said that his own studies of Father Guardini, a favorite also of retired Pope Benedict XVI, seemed to be echoed in many of the works of Pope Francis. As a Jesuit priest, Borghesi noted, the future Pope Francis had gone to Germany to work on a doctorate on Guardini’s concept of “polar opposition,” although he never finished the degree.

But Borghesi said he also saw traces of the emphasis on dialetics, or the relationship between opposites, in speeches and writings of then-Father Bergoglio during his time as Jesuit provincial in Argentina, years before his formal study of Guardini began.

With the help of Guzman Carriquiry, secretary of the Pontifical Commission for Latin America, Borghesi was able to send Pope Francis questions, which he answered. The result, he said, was Pope Francis’ explanation that one of the earliest influences on his philosophy and theology was the French Jesuit Father Gaston Fessard’s “Analysis of the Dialectic of the Spiritual Exercises of St. Ignatius.”

Together with the writings of St. Peter Faber, whom Pope Francis canonized in 2013, the work helps explain the pope’s focus on being a “contemplative in action, the living unity of opposites,” Borghesi said. “The Christian life moves between heaven and earth, a tension that does not find its solution in a system,” but only in the mystery of God, who guides history.

But, Borghesi said, his book also was motivated by “the spectacle of professional critics, late-arriving theologians for whom the South American pope doesn’t have the theological-philosophical preparation to exercise the ministry of the successor of Peter.”

“Their snobbery is mixed, in this case, with a conspicuous dose of arrogance and ignorance,” he wrote in the Vatican newspaper, L’Osservatore Romano.

NEXT: Pope names women as undersecretaries of office for laity, family, life