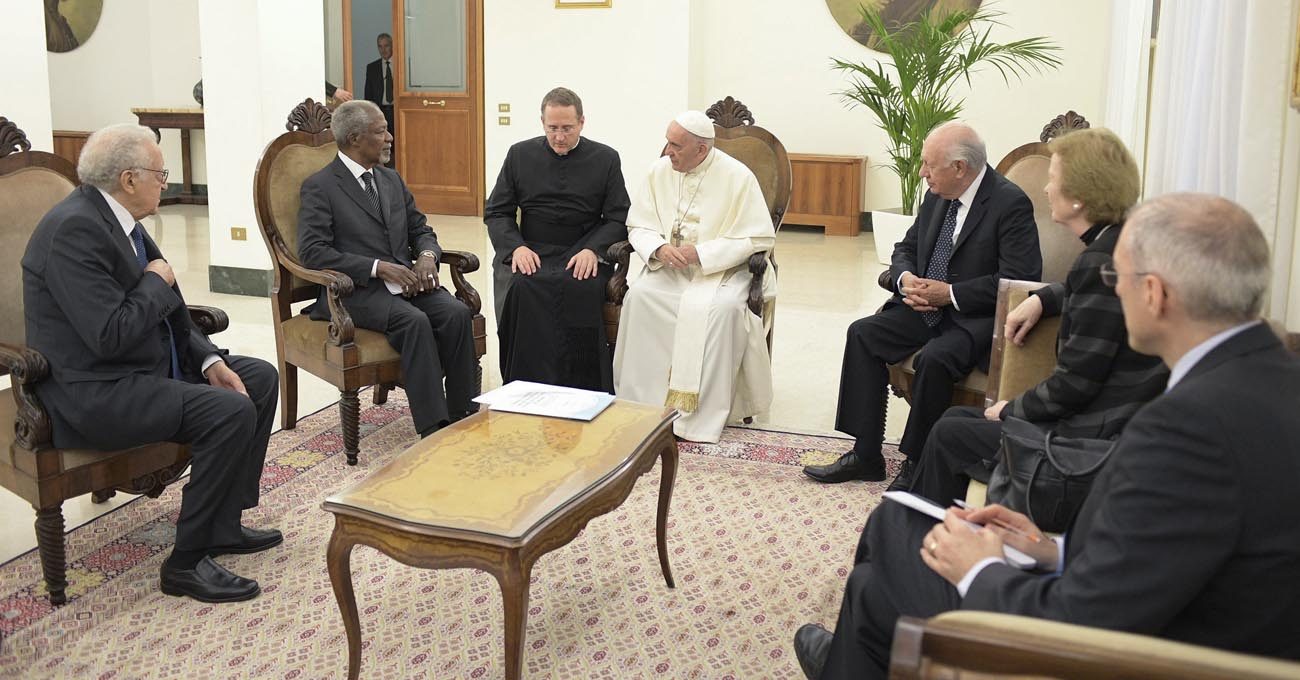 Pope Francis talks with Kofi Annan (second from left), former secretary-general of the United Nations, during a private audience at the Vatican Nov. 6 with members of The Elders, a group of global leader dedicated to promoting peace and human rights around the world. (CNS photo/L'Osservatore Romano)

“Pope Francis has shown great moral leadership on the crucial issues of our time. His assertion of the values of peace and human dignity resonates with people of all faiths and those of none,” Annan said in a written statement released after the Nov. 6 meeting in the pope’s residence.

Annan and Robinson made the private visit Nov. 6 together with Lakhdar Brahimi and Ricardo Lagos as members of “The Elders,” an independent group of global leaders who use their experience and influence to support peace and human rights.

The four representatives met with the pope “to express their appreciation and support for his work on global peace, refugees and migration, and climate change,” according to The Elders’ website.

The organization is “proud to stand in solidarity with him today and in the future as we work for justice and universal human rights,” Annan, chair of The Elders, said in his statement.

Annan told Vatican Radio it was important for them to visit the pope because they hold a number of interests and values in common, and they wanted to “discuss how we can work together, how we can pool our efforts on some of these issues.”

Robinson, who is also a former U.N. high commissioner for human rights and a U.N. envoy on climate change, told Vatican Radio that they spoke about climate change and other issues where “the pope has given leadership. We felt there was a great deal of common ground between us.”

Other issues they discussed, Annan told the radio, were migration, nuclear weapons, the mediation of conflicts and “the importance of giving women a voice and respecting their role.”

“I hope this will be the first of many meetings,” he said.

They expressed their appreciation for what the pope has been doing, Robinson said, and how he, like The Elders, is “trying to be a voice for the voiceless” and the marginalized.

“I think he could be a future ‘Elder,'” Annan told the radio, to which Robinson remarked, “I think he’s a Super Elder.”