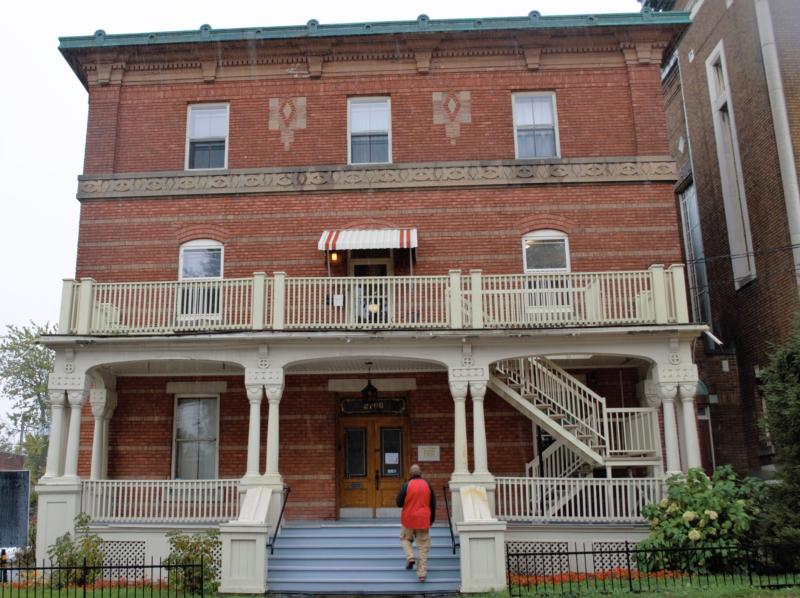 A man walks up the stairs of the rectory of our Lady of Victory Parish Oct. 9 in Montreal. This new center, called Le Pont (The Bridge), was created by the Archdiocese of Montreal for women and children asylum seekers. (CNS photo/Yves Casgrain, Presence)

MONTREAL (CNS) — When a Haitian mother and her two young children crossed into Canada by taxi, “police officers said that I was going to be arrested because I had just done something illegal.”

“I said to myself: ‘It’s better to get arrested than to be killed in Haiti,'” said the woman, who asked to be identified only by her first name, Emmanuela.

Like many asylum seekers, she was directed to the Montreal YMCA. Now, however, she lives at the rectory of Our Lady of Victory Parish, which on Oct. 2 opened its doors to women and children seeking asylum.

“It was a warm welcome. We are at home,” she said.

“The wait is stressful. I don’t want to go back to Haiti. It’s not a life. We receive death threats. So, I’m waiting. I keep hope. I’m not happy, but a little quieter,” she said.

In the small kitchen, asylum seekers are talking cheerfully. Christina, Emmanuela’s 2-year-old daughter, draws at a table. She is quickly joined by Santopadre, who draws her attention to the small colorful pumpkins in front of her. Santopadre wanted to emphasize Thanksgiving in a simple and fun way.

Through the always opened door of his office, Le Pont’s coordinator, Arthur Drieux, keeps an eye on everything.

“I hear children playing, babies screaming. I see people passing by. Our guests stop and invite me to share their meal.”

“Here,” he explained, “we make a point of not treating residents in an administrative way. We want them to feel at home. We treat them as members of our family.”

He said the residents take on the various daily tasks.

“They’re people like us,” he said. “They cook, take care of their children and scold them when necessary. When they see that I tinker around the house, they give me a hand. This is like home, yet they know they’re here in a transitional way.”

Le Pont can count on a handful of volunteers who commit themselves for a given time. Isabel Barrera, a former social pastoral worker, recently volunteered.

“I came to Canada as an immigrant. I know what asylum seekers are going through,” she said.

Her experience dictates how she responds to residents who share their pain and anguish.

“We listen to them. However, we are not specialists. That’s why we hope to recruit volunteer psychologists.”

She also believes in the need to train volunteers in intercultural dialogue.

“To become a volunteer at Le Pont, you need to have an open mind. We all have prejudices. We must all work on this,” Barrera said.

Santopadre said she feels the “presence of God in everything I do. It is a very concrete presence. He has the face of little Christina and her little sister, Joyce. He has the face of this mother who has another religion than mine, but who prepares the pumpkin marmalade, because I do not have time to prepare it. For me, here is God.”

Casgrain is a journalist with Presence info, based in Montreal.

NEXT: Q&A with Good Shepherd Sister after she visited her hometown in Syria