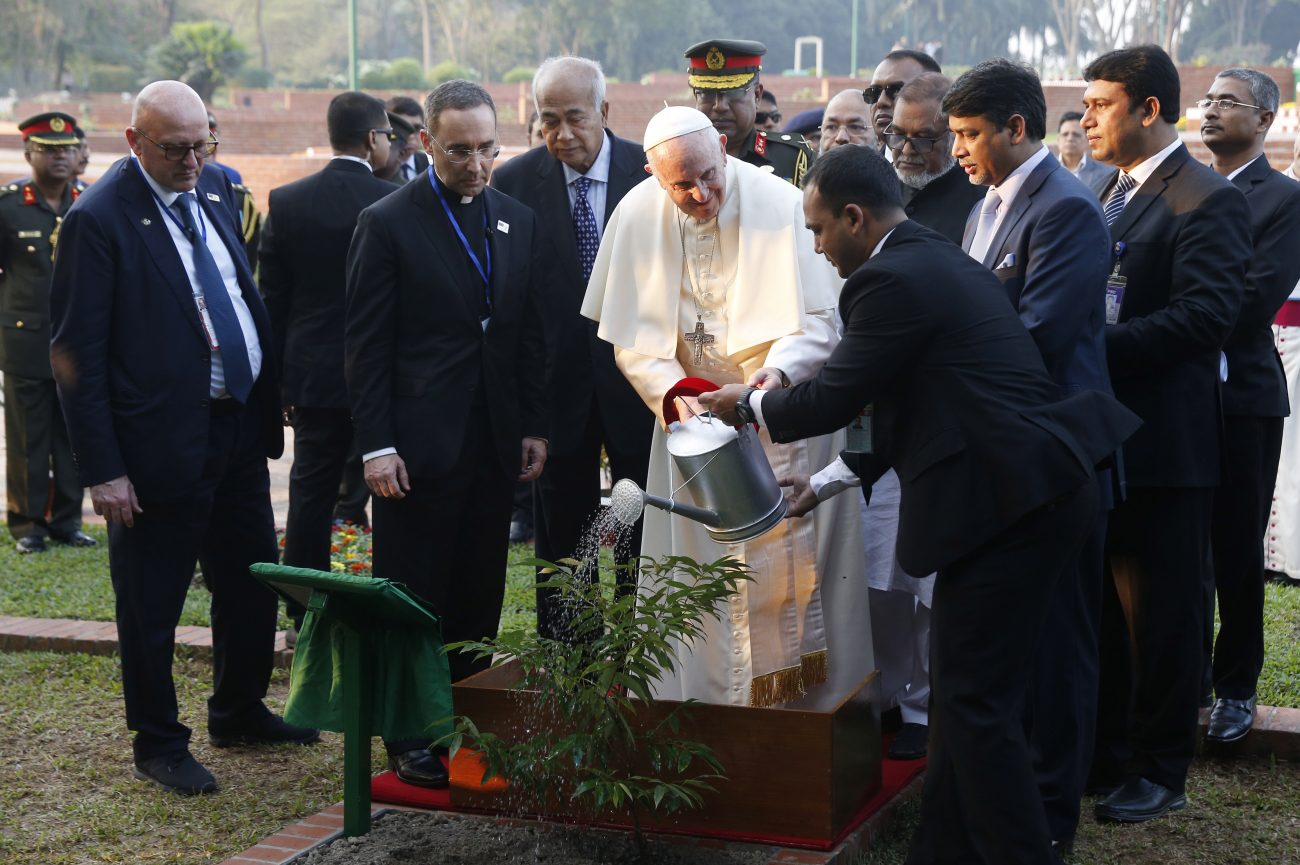 Pope Franci waters a tree he planted during a visit to the National Martyrs' Memorial in Savar, Bangladesh, Nov. 30. (CNS photo/Paul Haring)

Arriving in Bangladesh from Myanmar Nov. 30, Pope Francis wasted no time in mentioning the plight of the refugees who have been a source of concern for him for more than two years.

While he spoke diplomatically in Myanmar about the obligation to protect the rights of all people and ethnic groups, he was more specific in Bangladesh, referring to the “massive influx of refugees from Rakhine state” in Myanmar. He did not, however, use the word “Rohingya,” which is how the refugees identify themselves.

Providing shelter and basic necessities to the refugees “has been done at no little sacrifice,” the pope said.

The eyes of the world have watched Bangladesh take the refugees in, he said, but clearly the situation is still dire.

“None of us can fail to be aware of the gravity of the situation, the immense toll of human suffering involved, and the precarious living conditions of so many of our brothers and sisters, a majority of whom are women and children, crowded in the refugee camps,” he said.

Pope Francis publicly pleaded with the international community to assist Bangladesh in meeting the refugees’ emergency needs, but also in helping to resolve the crisis in Myanmar that led them to flee.

As he did in Myanmar, the first stage of his trip, the pope also spoke in Bangladesh about interreligious dialogue, religious freedom and consolidating peaceful coexistence among members of different religious communities.

From the Dhaka international airport, Pope Francis went directly to the National Martyrs’ Memorial, which honors those who died in the 1971 war in which Bangladesh separated from Pakistan. In the memorial’s guestbook, Pope Francis wrote: “Recalling all those who gave their lives as the nation came to birth, may the people of Bangladesh work truly for justice and the common good.”

In the book, under the heading “name,” he wrote “Francis.” Under “designation,” he wrote, “Roman Catholic bishop.”

He held a private meeting with Bangladeshi President Abdul Hamid, then addressed the president, government officials, diplomats and leaders of Bangladeshi society.

Welcoming the pope, Hamid told the pope his government had sheltered 1 million Rohingya. Unfortunately, he said, “thousands of them, including women and children, were brutally killed, thousands of women were violated. They saw their homes burned into ashes.”

The president, too, spoke of interreligious dialogue and harmony among all groups in the nation where the majority of people are Muslim.

“We know that no religion is immune from forms of individual delusion or ideological extremism,” he told the pope, but his government is working to “eradicate the root causes of terrorism and violent extremism.”

Hamid told the pope that Bangladeshis have a tradition of coexistence and believe “religion is personal, but its festivals are universal” and something neighbors of different faiths celebrate with each other.

“In a world where religion is often — scandalously — misused to foment division, such a witness to its reconciling and unifying power is all the more necessary,” the pope told him.

“Only through sincere dialogue and respect for legitimate diversity can a people reconcile divisions, overcome unilateral perspectives and recognize the validity of differing viewpoints,” Pope Francis said. “Because true dialogue looks to the future, it builds unity in the service of the common good and is concerned for the needs of all citizens, especially the poor, the underprivileged and those who have no voice.”