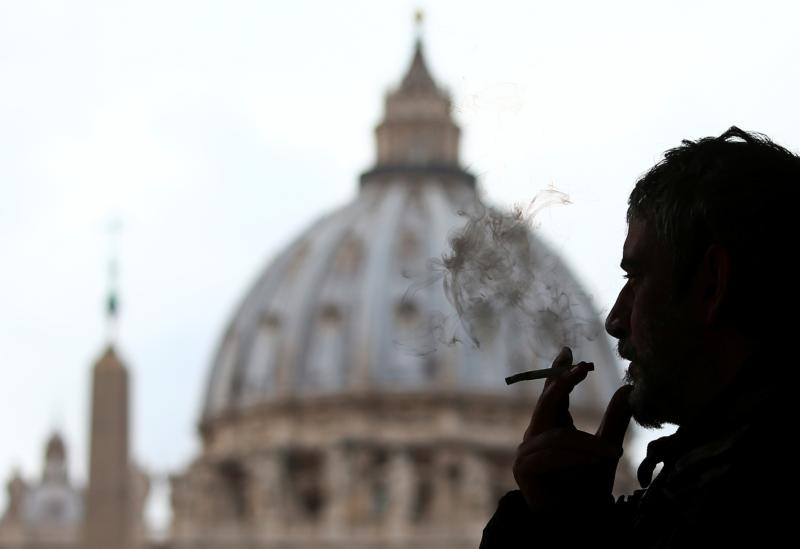 A man smokes a cigarette in front of St. Peter Square at the Vatican Nov. 9. Pope Francis has decided that the Vatican will stop selling cigarettes to its employees in 2018 because of the health risks of smoking. (CNS photo/Alessandro Bianchi, Reuters)

VATICAN CITY (CNS) — Concerned by the damage caused by smoking, Pope Francis has banned the sale of cigarettes in Vatican City State.

Starting in 2018, the Vatican “will cease to sell cigarettes to employees,” Greg Burke, Vatican spokesman, said in a Nov. 9 statement.

“The reason is very simple: The Holy See cannot contribute to an activity that clearly damages the health of people,” he said. “According to the World Health Organization, every year smoking is the cause of more than seven million deaths throughout the world.”

The Vatican used to be known as a safe haven for cigarette smokers. That changed dramatically in 2002, when Vatican City prohibited smoking in offices and public places.

However, cigarettes continued to be sold to current and retired personnel at the Vatican. Even after the cigarette ban goes into effect, the Vatican will continue discount sales of gasoline, groceries and other goods to employees and retirees.

Nevertheless, while cigarette sales “are a source of revenue for the Holy See, no profit can be legitimate if it puts lives at risk,” Burke said.

On a moral level, the church has never defined smoking as a sin. The Catechism of the Catholic Church says the gift of physical health requires “reasonable care” of the body, and more specifically says: “The virtue of temperance disposes us to avoid every kind of excess: the abuse of food, alcohol, tobacco or medicine.”