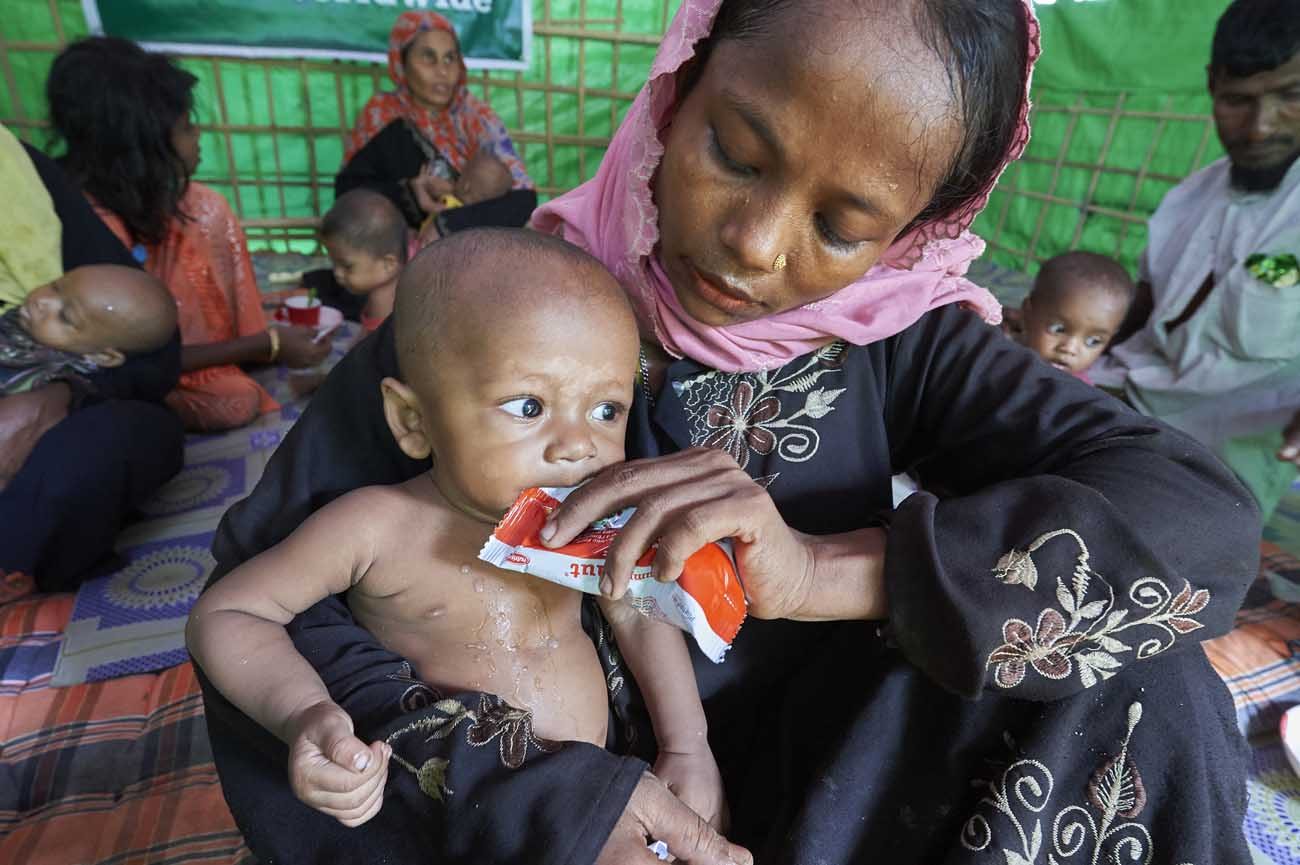 A woman from Myanmar feeds her child in a U.N. clinic for severely malnourished Rohingya children Oct. 28 in the Balukhali Refugee Camp near Cox's Bazar, Bangladesh. More than 600,000 Rohingya have fled government-sanctioned violence in Myanmar for safety in Bangladesh. (CNS photo/Paul Jeffrey)

COX’S BAZAR, Bangladesh (CNS) — Although Bangladesh has welcomed a massive influx of Rohingya refugees from neighboring Myanmar in recent weeks, a Catholic aid official is worried that the welcome may soon be wearing thin.

James Gomes, regional director of Caritas, the church’s charitable agency, said Bangladesh responded quickly to the surprise arrival of more than 600,000 Rohingya, most of whom fled their homes with nothing but the clothes on their backs.

“As a Bangladeshi, I’m proud of my people and my government. Even though we’re densely populated, we made the quick decision to open the border and host the Rohingya. People from all over the country came forward in order to stand beside these people who had suffered so much. Without that solidarity, many more people would have died,” Gomes told Catholic News Service.

Yet such hospitality is starting to be tested, Gomes said.

“We are hearing from people in the host communities that the presence of the Rohingya is having a negative impact on their daily lives. Day laborers, for example, are having a difficult time finding work because the newcomers sell their labor for less. A Bangladeshi worker was getting 600 takas (US$7) a day, but a Rohingya worker will settle for 300 or 400 takas a day,” he said.

Caritas Bangladesh has hired dozens of local residents to aid with assessment and food distribution. Gomes said half of the temporary hires are refugees and half are from the host community. They are paid 900 takas a day.

The humanitarian crisis has also pushed up the local cost of living.

“Bus fares have gone from 10 to 20 takas, and at times you now have to wait a long time for a bus that has space. Similarly, even inexpensive foods like bananas have doubled in price, and that’s causing problems for local people,” Gomes said.

The refugee influx is also causing an environmental crisis, in part because the massive numbers of refugees quickly raced ahead of government efforts to channel them into organized settlements.

“In order to build their shelters and get firewood, since the first days they arrived the refugees have been cutting trees. This is going to create a huge disaster in the long run, and we’ve already seen people injured when heavy rains provoked mudslides,” Gomes said.

Aid workers here worry about a possible health crisis. While wells with hand pumps were quickly installed in the cramped refugee camps, they are usually shallow and located close to primitive latrines. Open defecation is common.

In October, the World Health Organization and Bangladesh’s Ministry of Health and Family Welfare launched a massive cholera vaccination program, the second-largest in history. Any outbreak of disease in the camps would quickly spread to neighboring Bangladeshi communities.

Tension between residents and the refugees has also flared into violence. On Oct. 28, a Bangladeshi man in Cox’s Bazar was killed in an apparent dispute over land, and police arrested two newly arrived Rohingya men.

A critical element of the humanitarian response focuses on mitigating conflicts with local communities. As people line up for food distribution, a Caritas staff member addresses those in line about the dangers of human trafficking, including the problem of girls and young women being recruited into sex work.

The government, which does not refer to the Rohingya as refugees but rather as “displaced Myanmar nationals” — hoping both to sidestep some legal requirements as well as deflate any expectations that the Rohingya are here to stay — has prohibited non-Rohingya from being in the camps after 5 p.m. It also has set up checkpoints to stop any Rohingya from traveling deeper into Bangladesh.

Gomes said that while tensions have grown, they have not yet reached a tipping point.

“People are not yet telling the refugees to go home. They are still trying to accommodate them. Government is working hard to meet their needs. That will continue until we can figure out how they can peacefully repatriate. Most of the refugees I have spoken with want to go back, but they first must be assured of their security,” he said.

Archbishop Moses Costa of Chittagong said the church is called to do more than just help the refugees survive in Bangladesh.

“There is a lot of concern internationally, and people are coming forward to help. That’s a good thing. But I would like to ask for more. It’s not enough to meet their material needs. We need to put pressure on governments to create the conditions for them to safely return home,” Archbishop Costa told Catholic News Service.

“The people I talked with told me they suffered persecution and rape and killings, and they are afraid to go home. Some of them were so traumatized they couldn’t talk,” he said.

Archbishop Costa also worries about long-term problems. He said mounting resentment about the Rohingya presence has caused some tribal groups who resemble the Myanmar refugees to leave the city of Chittagong “because they are worried about revenge from the Bangladeshi people.”

The archbishop said he expects Pope Francis’ Nov. 30-Dec. 2 visit to Bangladesh will bring hope to the Rohingya and their new neighbors.

“He has already said that the Rohingya are some of the most persecuted people in the world, and that they are our sisters and brothers and we must respond to them,” he said.

He also acknowledged that the papal visit will likely be controversial. Pope Francis will visit Myanmar before Bangladesh.

“The bishops’ conference in Myanmar doesn’t want the pope to even mention the word Rohingya. That in itself is evidence of the difficulties these people face. But the Holy Father constantly pushes us to attend to the needs of the poorest people, the people at the periphery. I don’t know how the pope will say it, but I know that he will not be able to go without saying something. His heart is with these people,” Archbishop Costa said.

NEXT: Pope bans cigarette sales at the Vatican