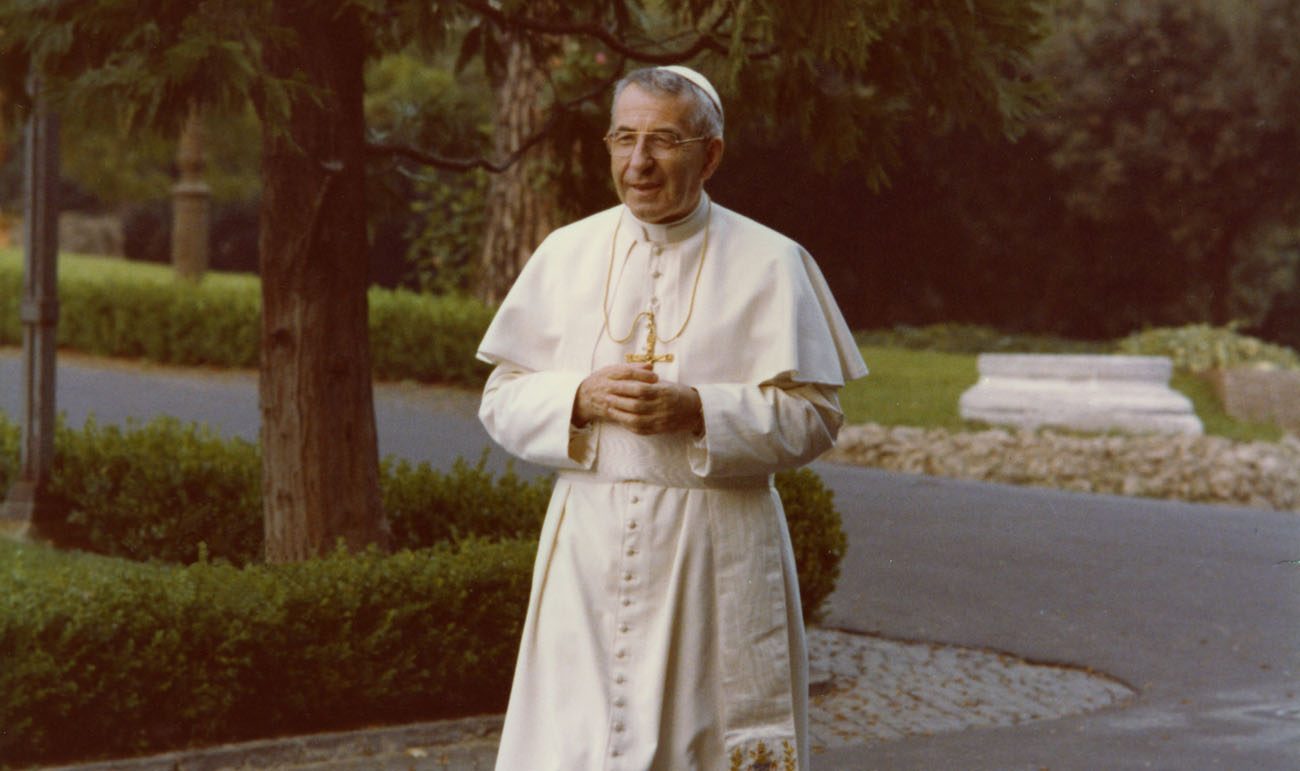 Pope John Paul I walks at the Vatican in 1978. Pope Francis has advanced the sainthood cause of Pope John Paul I with a decree recognizing his heroic virtues. (CNS file photo/L'Osservatore Romano)

VATICAN CITY (CNS) — During his brief pontificate in 1978, Pope John Paul I delivered 19 speeches — many of which included folksy stories and examples from his own life.

Here is a sampling of quotes from those talks, as presented in a story published by Catholic News Service at the time:

On Christian community: “Rome will be a true Christian community if God is honored not only with an influx of faithful in churches and not only when private life is lived morally, but also through love of the poor. These people, said the Roman Deacon Lawrence, are the real treasures of the church.”

On papal primacy: “To my left and my right are seated cardinals and bishops, my brothers in the episcopacy. I am only their older brother.”

On faith: “My mother told me when I had grown up a bit, ‘As a child you were very sick. I had to carry you from one doctor to another and often stay up all night with you. Do you believe me?’ How could I have said, ‘Mamma, I don’t believe you’? — ‘Yes, I believe what you said, but I believe especially in you,’ and so it is with faith. It is not a matter of believing only the things God reveals, but also of believing in him who loved us so much.”

On nonbelievers: “As a bishop I was very near those who do not believe in God. I got the idea that these people fight not against God but against the mistaken idea they have of God.”

On humility: “The Lord counseled us to be humble. Even if we’ve done great things, say ‘We are useless servants.’ Our tendency, however, is quite the opposite — to put ourselves on display.”

On the elderly: “As bishop of Venice, now and then I went to nursing homes. Once I came upon an elderly sick lady.

‘No,’ she said crying. ‘My daughter-in-law and my son never come to see me. I want to see my grandchildren.’

Food and heat are not enough. There’s the heart. We must also see to the needs of the heart of our elderly.”

On the Middle East: “May the (Camp David) meetings open the way toward a just and complete peace. Just, that is, satisfactory to all involved. Complete, that is, without leaving unresolved any issues: the problem of the Palestinians, the security of Israel, the Holy City of Jerusalem.”

On defects in the church: “If a mother is sick, or if my mamma becomes lame, I love her all the same. The same goes for the church. If there are — and there are — defects and shortcomings, our affection for the church must never lessen.”

On redemption: “A woman, who confessed to me many years ago, was discouraged because she had led a morally stormy life.

‘May I ask you how old you are,’ I questioned.

‘Well, you can live another 40 or 50 years and do a pile of good. Contrite as you are, don’t think of the past, but project yourself toward the future and renew your life with God’s help.'”

On doctrine: “The truths are what they are. We must walk along that road, understanding them always more deeply, updating them, and presenting them in a form adapted to new times.”

On Christian pilgrimage: “When I was a boy, I was in ecstasy reading the voyages described by Jules Verne in ‘20,000 Leagues Under the Sea,’ ‘Around the World in 80 Days,’ etc., but our voyages of love toward God are much more interesting.”

On liberation theology: “I think that the church’s magisterium can never insist enough on presenting and offering solutions to the great problems of freedom, justice, peace and development. Lay Catholics can never work hard enough to overcome these problems. But it is wrong to affirm that political, social and economic liberation coincides with salvation in Jesus Christ, or that the kingdom of God is the same as the kingdom of man, that where Lenin is, there is Jerusalem.”

On free will: “Once a man went to the car dealer to buy a car. The dealer told him, ‘Look, the car is well equipped. Treat it well with premium gas and oil.’ But the buyer said, ‘ No, I can’t even stand the smell of gas and oil. I’ll lubricate the engine with marmalade.’ ‘Do as you please,’ said the dealer. ‘But don’t complain to me if you wind up in a ditch.’ The Lord does something similar with us. He gave us these bodies enlivened with a soul and free will. He said, ‘This mechanism is worth something, treat it well.'”

On liturgy: “I would like to see Rome give a good example with liturgies celebrated piously and without jarring ‘creativity.’ Such abuses have favored reactionary attitudes which have led to positions untenable in themselves and in contrast with the Gospel. … I would like to assure you that every liturgical irregularity will be diligently avoided.”

On priestly life: “Once I saw a porter at the Milan train station who slept peacefully on a sack of coal against a pillar. The trains leaving and arriving sounded their whistles, the loudspeakers gave booming announcements and the noisy crowds shuffled by. But the porter, continuing to sleep, seemed to say: ‘Do whatever you want, but I need to sleep.’ We priests have to do somewhat the same thing. Around us there is continuous movement. People, the newspapers, radio and television continue to speak out. With priestly discipline we must say: ‘Beyond certain limits, for me, a priest of the Lord, you do not exist. I must take a little silence for my soul. I detach myself from you to be united with my God.'”

NEXT: Pope puts John Paul I on path to sainthood, declares him ‘venerable’