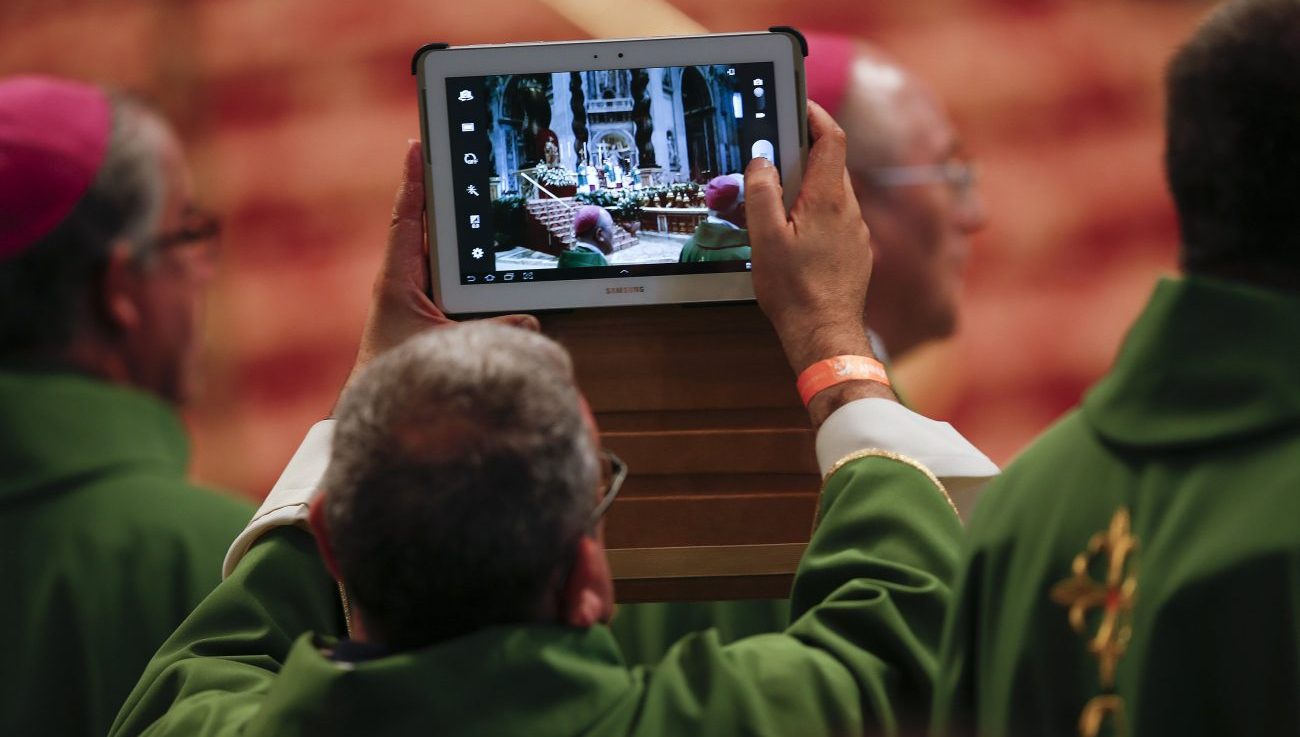 A priest take pictures with a tablet as Pope Francis celebrates Mass in St. Peter's Basilica at the Vatican in this July 7, 2013, file photo. The pope, at his Nov. 8 general audience, said it's "an awful thing" for people to take cellphone photos at Mass. (CNS photo/Tony Gentile, Reuters)

VATICAN CITY (CNS) — The Mass is not a show, but a beautiful, transformative encounter with the true loving presence of Christ, Pope Francis said.

That is why people need to focus their hearts on God, not focus their smartphones for pictures during Mass, he said.

When the priest celebrating Mass says, “Let us lift up our hearts,” he is not saying, “lift up our cellphones and take a picture. No. It’s an awful thing” to do, the pope said Nov. 8 during his weekly general audience in St. Peter’s Square.

“It makes me so sad when I celebrate (Mass) in the square or in the basilica and I see so many cellphones in the air. And not just by the lay faithful, some priests and bishops, too,” he said.

“Please, Mass is not a show. It is going to encounter the Passion, the resurrection of the Lord,” he said to applause.

The pope’s remarks were part of a new series of audience talks on the Mass. The series, he said, should help people understand the true value and significance of the liturgy as an essential part of growing closer to God.

A major theme highlighted by the Second Vatican Council was that the liturgical formation of the lay faithful is “indispensable for a true renewal,” Pope Francis said. “And this is precisely the aim of this catechetical series that we begin today — to grow in understanding the great gift God gave us in the Eucharist.”

“The Second Vatican Council was strongly driven by the desire to lead Christians to an understanding of the grandeur of the faith and the beauty of the encounter with Christ,” he said. That is why, “with the guidance of the Holy Spirit, an appropriate renewal of the liturgy” was necessary.

The Eucharist is a wonderful way Jesus Christ makes himself truly present in people’s lives, the pope said.

To take part in the Mass is to relive the Lord’s passion and redemptive death, where, on the altar, he is present and offers himself for the salvation of the world, Pope Francis said.

“The Lord is there with us and present,” he said. “But so many times we go, we look around, we chitchat with each other while the priest celebrates the Eucharist.”

If the president or any other famous or important person were to show up, he said, it would be a given “that we all would be near him, we would want to greet him. But think about it, when you go to Mass, the Lord is there and you, you are distracted, (your mind) wanders. Yet, it is the Lord!”

People should reflect on this, he said, and if they complain, “‘Oh father, Mass is boring.’ What are you saying? The Lord is boring? ‘No, not the Mass, but the priest.’ Ah, well, may the priest be converted,” but just never forget that the Lord is always there.

Catholics need to learn or rediscover many of the basics about the Mass and how the sacraments allow people to “see and touch” Christ’s body and wounds so as to be able to recognize him, just as the apostle St. Thomas did.

He said the series would include answering the following questions:

— What are the Mass readings for and why are they included in the Mass?

— What does is mean for people to participate in the Lord’s sacrifice and come to his table?

— What are people seeking? Is it the overflowing fount of living water for eternal life?

— Do people understand the importance of praise and thanksgiving with the Eucharist and that receiving it “makes us one body in Christ”?