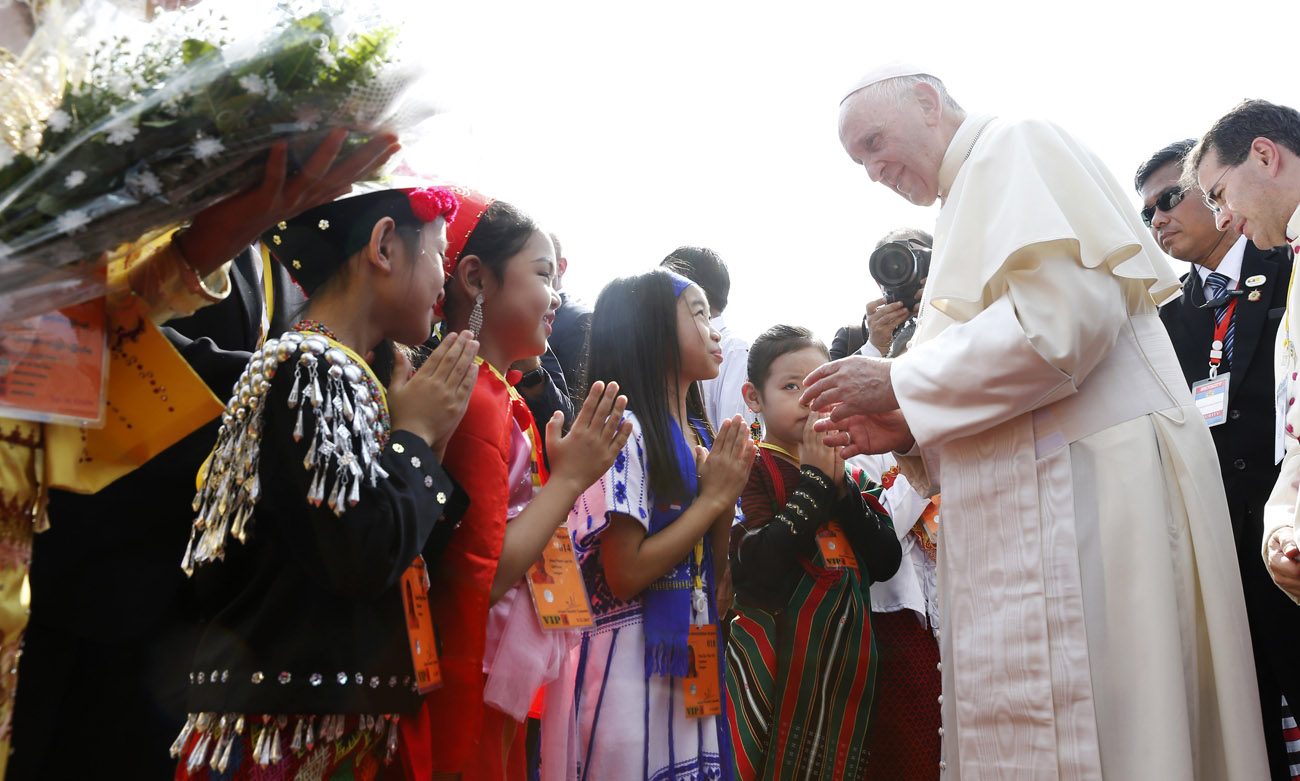 Pope Francis greets children as he arrives at Yangon International Airport in Yangon, Myanmar, Nov. 27. The pope is making a six-day visit to Myanmar and Bangladesh. (CNS photo/Paul Haring)

The arrival ceremony at the Yangon airport was brief and led by an envoy of the president, because the formal welcome was scheduled for the next day in Naypyitaw, which has been the capital since 2005.

However, Pope Francis had a “courtesy visit” with the leaders of the nation’s powerful military. The pope and Gen. Min Aung Hlaing, who was accompanied by three other generals and a lieutenant colonel, met that first evening in the Yangon archbishop’s residence, where the pope is staying.

Greg Burke, director of the Vatican press office, told reporters the meeting lasted 15 minutes. After discussions about “the great responsibility authorities in the country have at this moment of transition,” the two exchanged gifts.

The pope gave the general a medal commemorating his visit to Myanmar and the general gave the pope “a harp in the shape of a boat and an ornate rice bowl,” Burke said.

Pope Francis had been scheduled to meet the general Nov. 30, his last morning in Myanmar. Although the country is transitioning from military rule to democracy, the general has the power to name a portion of the legislators and to nominate some government ministers. Although described by Burke as a “courtesy visit” and not an official welcome, the visit seemed to go against the usual protocol, which would dictate that the pope’s first meetings with authorities would be with the head of state and head of government.

Burke did not say whether Pope Francis had mentioned in any way the plight of the Rohingya, a Muslim minority from Myanmar’s Rakhine state, who are treated as foreigners in the country. Gen. Min Aung Hlaing has been criticized by human rights groups for what has been described as disproportionately harsh measures against the entire Rohingya community following attacks on security posts by small groups of Rohingya militants.

According to the general’s Facebook page, he told Pope Francis there is no religious discrimination in Myanmar.

The pope arrived in Myanmar after a more than 10-hour, overnight flight from Rome. The children in costumes, representing only a portion of Myanmar’s ethnic groups, were joined by another 100 schoolchildren wearing white slacks and white T-shirts with the logo of the papal visit.

Banners and billboards along the road from the airport into the city proclaimed: “A heartiest welcome to the Holy Father, Pope Francis.”

Because the flight took off late at night, Pope Francis spent less time with reporters than he usually does. He made no comment about his hopes for the trip, only mentioning that he was told it was very warm in Yangon and he hoped the reporters would not suffer too much.

As is customary, the pope sent telegrams to the heads of state of all 13 nations he flew over on the way, including Italy.

In his message to Italian President Sergio Mattarella, Pope Francis said he was making the trip to Myanmar and Bangladesh Nov. 27-Dec. 2 as a “pilgrim of peace, to encourage the small but fervent Catholic communities and to meet believers of different religions.”

The majority of people in Myanmar are Buddhist, while the majority of Bangladeshis are Muslim. Pope Francis had meetings with religious leaders scheduled in both countries.