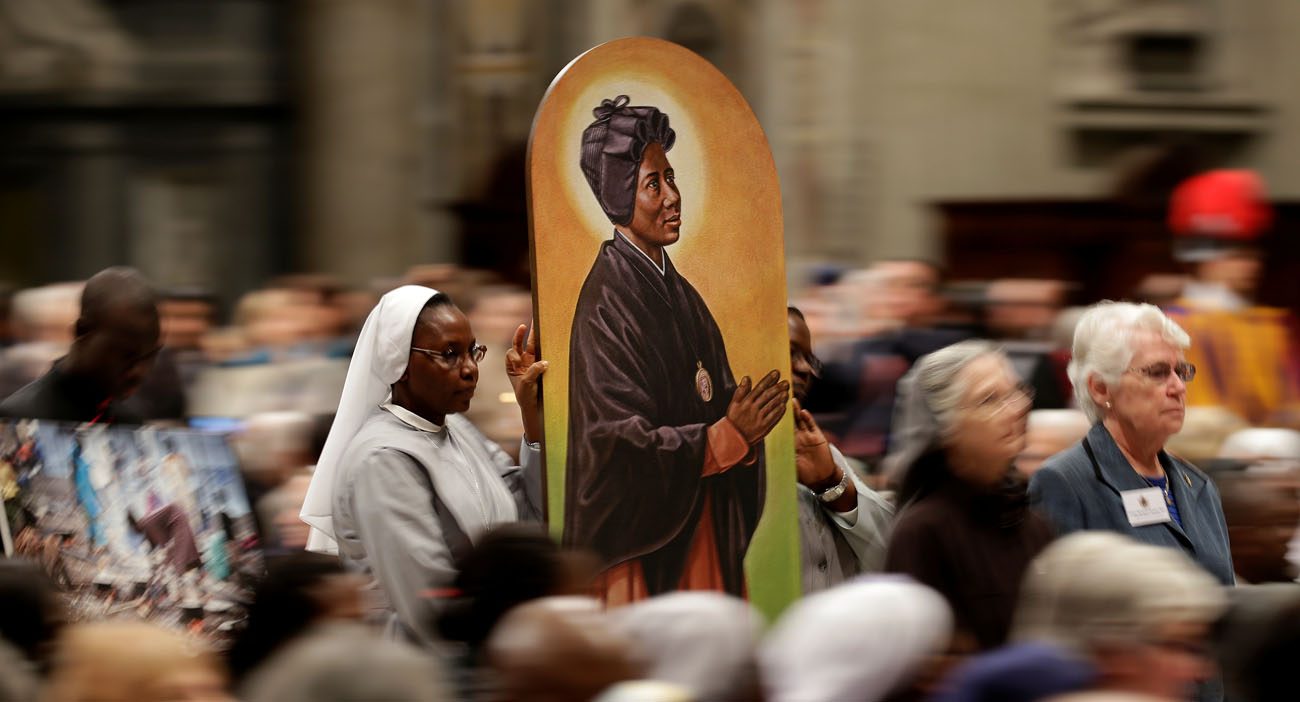 An image of Sudanese St. Josephine Margaret Bakhita is carried in procession during a prayer service led by Pope Francis for peace in South Sudan and Congo in St. Peter's Basilica at the Vatican November 23. (CNS photo/Max Rossi, Reuters)

VATICAN CITY (CNS) — Although it was not possible to visit South Sudan as he had hoped, Pope Francis said that “prayer is more important, because it is more powerful. Prayer works by the power of God for whom nothing is impossible.”

With hundreds of women and men from dozens of religious orders, with migrants from Africa and representatives from a number of Christian churches and a variety of religions, the pope presided Nov. 23 over an evening prayer service for peace in South Sudan and Congo.

As the service began in St. Peter’s Basilica, religious carried in procession large photographs of women and children from the two wartorn countries. The images were placed on easels at the foot of the sanctuary steps.

Flanking the photos were paintings of St. Josephine Bakhita from Sudan and Blessed Anuarite Nengapeta from Congo.

On the cross, Pope Francis said, Jesus “took upon himself all the evil of the world, including the sins that spawn and fuel wars: pride, greed, lust for power, lies.”

The pope’s brief reflection at the service ended with a series of prayers that began: “May the risen Lord break down the walls of hostility that today divide brothers and sisters, especially in South Sudan and the Democratic Republic of Congo.”

Echoing the petitions read during the service, he prayed that God would “comfort those women who are the victims of violence in war zones and throughout the world.”

“May he protect children who suffer from conflicts in which they have no part, but which rob them of their childhood and at times of life itself,” he prayed. Then he added, “How hypocritical it is to deny the mass murder of women and children! Here war shows its most horrid face.”

He also prayed that God would sustain those who work for peace and would “strengthen in government officials and all leaders a spirit which is noble, upright, steadfast and courageous in seeking peace through dialogue and negotiation.”

The morning after the prayer service, the Vatican Dicastery for Promoting Integral Human Development announced Pope Francis was sending financial aid to dioceses in Congo’s Kasai region, which has been particularly embroiled in violence. The dicastery said an estimated 3,400 people have been killed there in recent months.

An early November note from Caritas Internationalis, the confederation of Catholic charities, said that in addition to those killed in the fighting, “hundreds have been mutilated and raped. Villages have been sacked and burned, and homes, churches, schools and health centers destroyed. By July 2017, the United Nations had already documented 80 mass graves.”

“An estimated 1.4 million people are internally displaced in the country,” the report said. “The conflict has since degenerated into inter-ethnic fighting and the recruitment of children as soldiers by the militias is commonplace.”