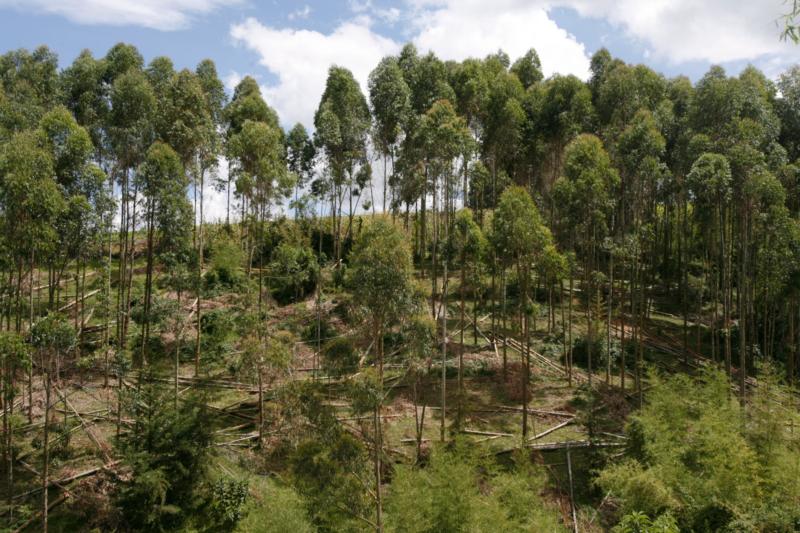 Freshly cut trees are seen in a forest in Kiptagich, Kenya. Denial or indifference when it comes to climate change will not help further honest research or facilitate finding adequate solutions, Pope Francis told government leaders attending a meeting on implementing the Paris accord. (CNS photo/Stephen Morrison, EPA)

VATICAN CITY (CNS) — Denial or indifference when it comes to climate change will not help further honest research or facilitate finding adequate solutions, Pope Francis told government leaders attending a meeting on implementing the Paris accord.

Ratified by 170 nations, the 2016 agreement marks “a shared strategy to tackle one of the most worrying phenomena our human race is experiencing — climate change,” the pope said in a written message.

The message was read Nov. 15 to those attending the COP23 session of the U.N. Climate Change Conference in Bonn, Germany, Nov. 6-17. The Vatican released a copy of the text Nov. 16.

In the message — addressed to the president of the COP23 session, Prime Minister Frank Bainimarama of Fiji — the pope said the Paris agreement is “a clear path of transition toward a model of low- or no-carbon economic development, encouraging solidarity and emphasizing the strong links that exist between fighting climate change and fighting poverty.”

The urgency of addressing climate change demands “greater commitment from countries, some of which will have to seek to take on a leadership role in such a transition,” which will also necessitate keeping in mind the needs of those who are most vulnerable, he said.

A recent U.N. Environment Program report found that current goals for cutting greenhouse gas emissions by the agreement’s signatory nations will result in just one-third of the reductions required by global targets for 2030.

Closing some of that gap would require increased action in curbing emissions by private industries and regional governments, the report said, but even if countries were to reach their national targets, there would still be an increase of 3 degrees Celsius by 2100 — a number beyond the Paris target of under 2 degrees Celsius.

The pope said if nations are to continue to build and implement guidelines and practices that are truly effective and able to reach the complex goals of the agreement, their “willingness to cooperate” must stay high.

“We must avoid falling into these four grievous attitudes that certainly do not help promote honest research and sincere and fruitful dialogue about building the future of our planet: denial, indifference, giving up and trusting in inadequate solutions.”

Focusing on economic and technological solutions is necessary, but not enough, he said; ethical and social concerns and consequences of a new vision of development and progress must also be considered.

Pope Francis told leaders to maintain a proactive and collaborative spirit so they can better stimulate and increase awareness and the willingness “to adopt truly effective decisions” to tackle climate change and poverty, and promote true, integral human development.

NEXT: Care for the dying does not mean obstinately resisting death, pope says