Care for the dying does not mean obstinately resisting death, pope says 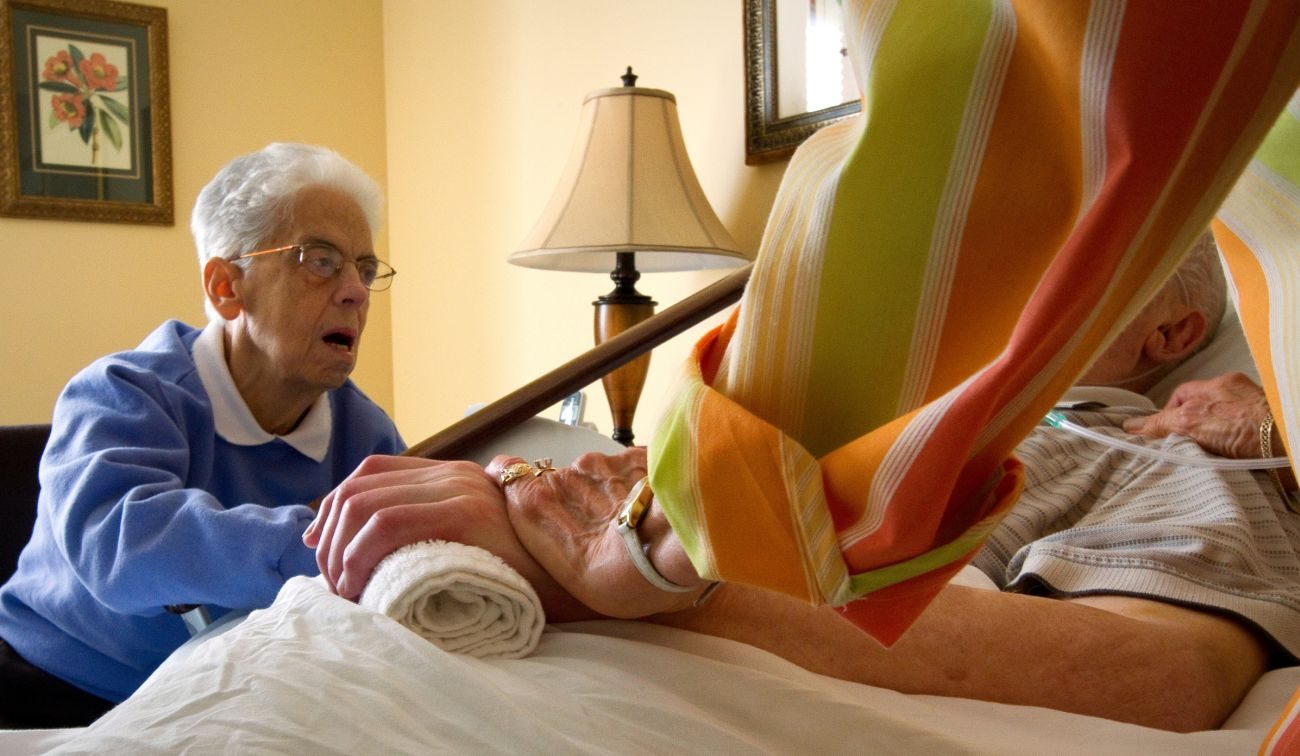 In this Sept. 7, 2012, file photo, family members watch over a man at his bedside at the Center for Compassionate Care in Pittsburgh. (CNS photo/Nancy Phelan Wiechec)

UPDATED – VATICAN CITY (CNS) — People who are dying must be accompanied with the love of family members and the care of medical professionals, but there is no requirement that every means available must be used to prolong their lives, Pope Francis said.

“Even if we know that we cannot always guarantee healing or a cure, we can and must always care for the living, without ourselves shortening their life, but also without futilely resisting their death,” the pope said in a message to the European members of the World Medical Association.

“This approach is reflected in palliative care, which is proving most important in our culture, as it opposes what makes death most terrifying and unwelcome: pain and loneliness,” the pope said.

The European members of the medical association were meeting at the Vatican Nov. 16-17 for a discussion with the Pontifical Academy for Life on end-of-life care. At the same time, across St. Peter’s Square, the Vatican Dicastery for Promoting Integral Human Development and the International Confederation of Catholic Health Care Institutions were hosting a meeting on inequalities in health care.

Pope Francis’ message touched both topics, which he said intersect when determining what level of medical intervention is most appropriate when a person is dying.

“Increasingly sophisticated and costly treatments are available to ever more limited and privileged segments of the population,” the pope said, “and this raises questions about the sustainability of health care delivery and about what might be called a systemic tendency toward growing inequality in health care.

“This tendency is clearly visible at a global level, particularly when different continents are compared,” he said. “But it is also present within the more wealthy countries, where access to health care risks being more dependent on individuals’ economic resources than on their actual need for treatment.”

A variety of factors must be taken into account when determining what medical interventions to use and for how long with a person approaching the end of his or her earthly life, Pope Francis said. For those with resources, treatments are available that “have powerful effects on the body, yet at times do not serve the integral good of the person.”

Even 60 years ago, he said, Pope Pius XII told anesthesiologists and intensive care specialists that “there is no obligation to have recourse in all circumstances to every possible remedy and that, in some specific cases, it is permissible to refrain from their use.”

Determining what measures amount to “therapeutic obstinacy” or “overzealous” treatment, and are therefore either optional or even harmful, requires discernment and discussion with the patient, the patient’s family and the caregivers.

“From an ethical standpoint,” the pope said, withholding or withdrawing excessive treatment “is completely different from euthanasia, which is always wrong, in that the intent of euthanasia is to end life and cause death.”

In determining the best course of action in caring for a dying person, the pope said, “the mechanical application of a general rule is not sufficient.”

If the patient is competent and able, the pope said, he or she “has the right, obviously in dialogue with medical professionals, to evaluate a proposed treatment and to judge its actual proportionality in his or her concrete case” and to refuse the treatment “if such proportionality is judged lacking.”

In either case, he said, even medical professionals must follow “the supreme commandment of responsible closeness,” remaining alongside those who are dying.

“It could be said that the categorical imperative is to never abandon the sick,” he said. “The anguish associated with conditions that bring us to the threshold of human mortality, and the difficulty of the decision we have to make, may tempt us to step back from the patient. Yet this is where, more than anything else, we are called to show love and closeness, recognizing the limit that we all share and showing our solidarity.”

“Let each of us give love in his or her own way — as a father, a mother, a son, a daughter, a brother or sister, a doctor or a nurse. But give it!” Pope Francis said.

Dr. Frank Ulrich Montgomery, president of the German Medical Association and organizer of the meeting, said the World Medical Association has not changed the position it adopted in 1987 and reaffirmed in 2013 that euthanasia and physician-assisted suicide are unethical, but doctors must respect a patient’s right to decline medical treatment.

However, he said Nov. 17, the position is debated constantly at association meetings, including the one at the Vatican, and is the object of a series of regional meetings of the association’s medical ethics committee.

Archbishop Vincenzo Paglia, president of the Pontifical Academy for Life, said it was important for the Vatican to be involved in the dialogue even though some participants disagree with the teaching of the church and the position of the association. “We aren’t billiard balls that meet only when knocking against each other,” he said, but human beings interested in listening to one another and trying to emphasize essential human values.

“He emphasized the obligation of continuing care,” which is not always the same thing as continuing medical treatment, the archbishop said.