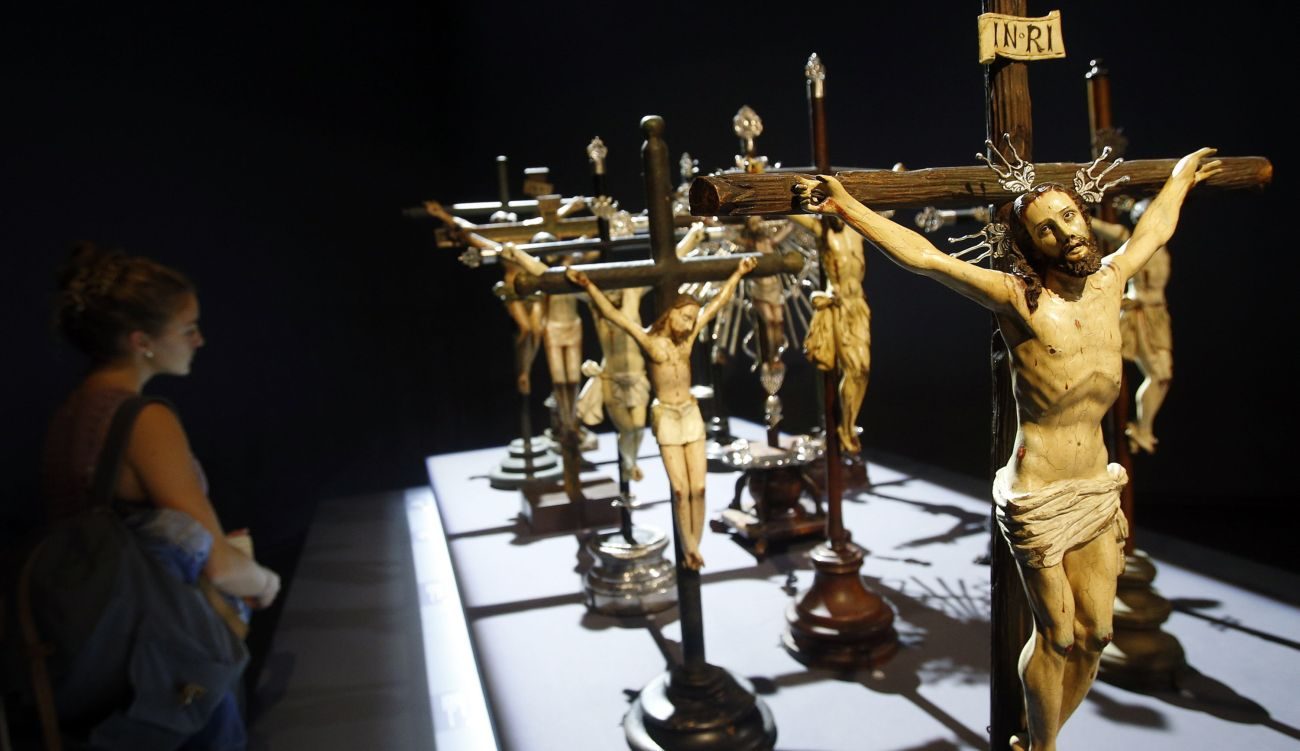 In this 2015 file photo, a woman visits an exhibit at the Catholic University in Santiago, Chile. The Vatican said Pope Francis will be in the South American country Jan. 15-18 and visit the cities of Santiago, Temuco and Iquique. (CNS photo/Felipe Trueba, EPA)

VATICAN CITY (CNS) — During his visit to Chile and Peru, Pope Francis will honor the country’s religious roots and underline the plight of indigenous men and women.

The Vatican said Pope Francis will be in Chile Jan. 15-18, visiting the cities of Santiago, Temuco and Iquique. He then will fly to Peru and, from Jan. 18-21, he will visit Lima, Puerto Maldonado and Trujillo.

In Chile, the pope will meet with residents of the Mapuche indigenous community in the Araucania region. Members of the Mapuche have called for the government to return lands confiscated prior to the country’s return to democracy in the late 1980s.

He will also meet with the indigenous people of the Amazon during his visit to Puerto Maldonado. The Amazon rainforest includes territory belonging to nine countries in South America and has experienced significant deforestation, negatively impacting the indigenous populations in the area and leading to a loss of biodiversity.

A special gathering of the Synod of Bishops to focus on the Amazon region will take place in Rome in October 2019.

The synod, he said, would seek to identify new paths of evangelization, especially for indigenous people who are “often forgotten and left without the prospect of a peaceful future, including because of the crisis of the Amazon forest,” which plays a vital role in the environmental health of the entire planet.

The Peru-Chile trip will be Pope Francis’ fourth to South America. In July 2013, he visited Brazil for World Youth Day. In July 2015, he traveled to Ecuador, Bolivia and Paraguay. His trip to Colombia in September was his third visit to the continent as pope.

Here is the detailed schedule released by the Vatican. Times listed are local, with Eastern Standard Time in parenthesis when it is different from local time:

— 9 a.m. (7 a.m.) Courtesy visit to Michelle Bachelet, president of the republic, at the presidential palace.

— 5:15 p.m. (3:15 p.m.) Meeting with priests, men and women religious, seminarians and novices at the cathedral of Santiago. Speech by pope.

— 7 p.m. (5 p.m.) Visit to the Pontifical Catholic University of Chile. Speech by pope.

— 8:30 a.m. Meeting with government authorities, members of civil society and the diplomatic corps in the courtyard of the presidential palace. Speech by pope.

— 9 a.m. Courtesy visit to Pedro Pablo Kuczynski, president of the republic, in the Ambassadors Room of the presidential palace.

— 12 p.m. Meeting with people of the Amazon at “Madre de Dios” stadium. Speech by pope.

— 1 p.m. Meeting with the people at the Jorge Basadre Institute. Greeting by pope.

— 1:15 p.m. Lunch with representatives of people of the Amazon at the Apaktone Pastoral Center.

— 4:45 p.m. Marian celebration of Our Lady of La Puerta at Plaza de Armas. Speech by pope.

— 9:15 a.m. Mid-morning prayer with contemplative nuns at the Shrine of Our Lord of the Miracles. Homily by pope.

— 10:30 a.m. Prayer before the relics of Peruvian saints in the city’s cathedral.

— 10:50 a.m. Meeting with Peru’s bishops in the archbishop’s residence. Speech by pope.

— Noon. Recitation of the Angelus at Plaza de Armas.