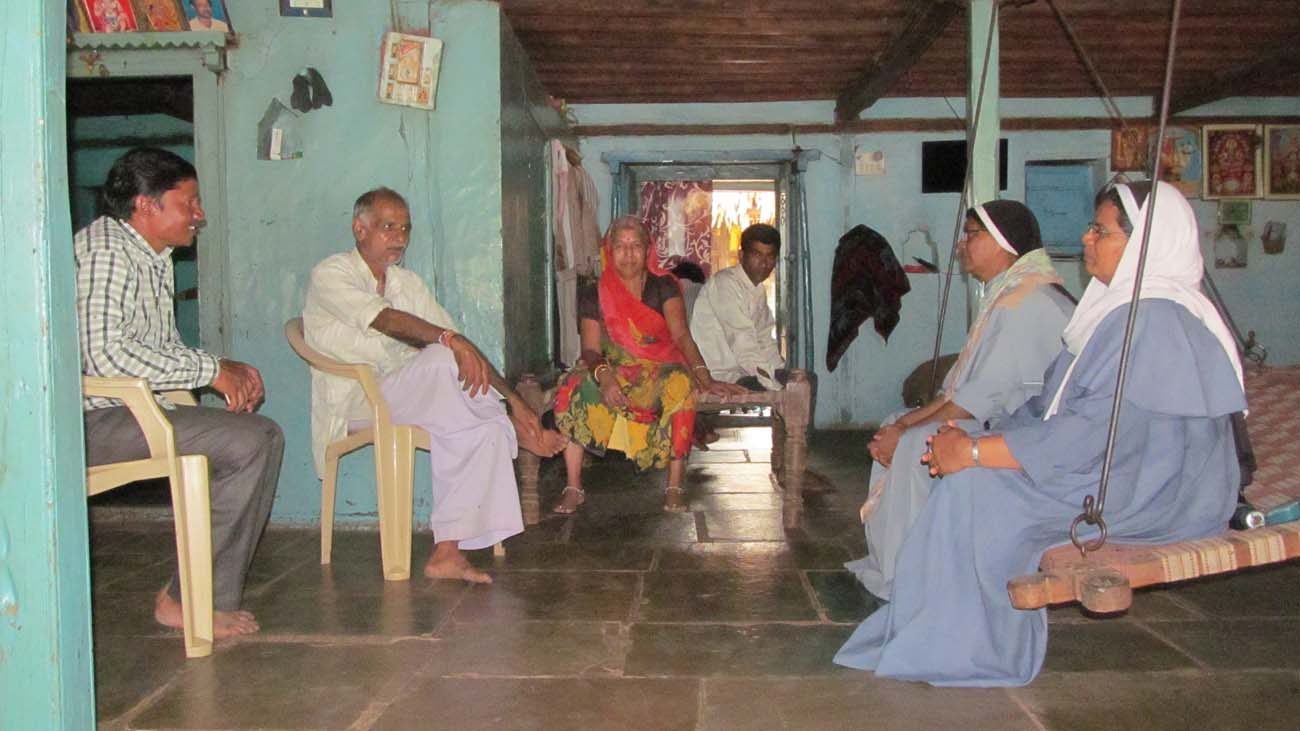 Sisters Deena and Alphonsa speak with Tarachand Solanki, second from left, an associate of Clarist Sister Rani Maria Vattali, at his residence in late August in Anand Nagar, India. Sister Rani Maria, who was was stabbed to death in 1995, was beatified Nov. 4. (CNS photo/Saji Thomas, Global Sisters Report)

UDAINAGAR, India (CNS) — When Clarist Sister Rani Maria Vattalil was first posted to this destitute central Indian region 25 years ago, she urged men loitering in the village to quit wasting their time drinking. They pretended to agree, until she left. But one day, the sister circled back — and caught them in the act.

“We used to pretend to be good boys in front of her, but after she left the village, we would start drinking,” said Tarachand Solanki. He was so upset when he was caught, he said, “I pledged in front of her that I would not drink again.”

His wife, Nani Bai, sitting on a cot near him, nodded and said, “He has not touched alcohol since that day.”

Now, Blessed Rani Maria, who was knifed to death by an assassin on a bus in 1995, is India’s first female martyr on the road to sainthood. A member of the Franciscan Clarist Congregation, an indigenous order, she was beatified Nov. 4 in Madhya Pradesh state.

Cardinal Angelo Amato, head of the Vatican’s Congregation for Saints’ Causes, declared her a martyr and “blessed” before tens of thousands at St. Paul High School grounds in Indore. Schoolchildren processed and danced during the ceremony.

The cardinal said Blessed Rani Maria “died to defend Gospel values. Her social apostolate was for the service of the poor and needy. Her prayer to Jesus kept her firm in holiness and spirituality. She also used to pray through the intercession of St. Alphonsa, which led her to the path of saintly life.”

People also gathered for a separate Mass Sacred Heart Church in Udainagar, where she is buried.

Samandar Singh killed Blessed Rani Maria at the behest of local moneylenders and landlords who were upset with her activism among landless people formerly assigned to India’s lower castes. The nun had encouraged the laborers to demand fair wages and the right to a dignified life.

Solanki said before Blessed Rani Maria came, the village had no drinking water, road connectivity, electricity or other basic facilities. He said they walked about two miles to get water from the river.

“We led a hand-to-mouth existence 25 years ago. Our condition began to change after Sister Rani Maria came into our lives,” he said.

“Today, we have drinking water and road connectivity. Our children now go to schools and colleges, and we generate decent income from our farms,” Solanki said.

Blessed Rani Maria introduced bore wells to the villagers. She taught the farmers crop rotation and pressed parents to send their children to school.

She formed women’s self-help groups that encouraged them to start small savings accounts to keep them away from the moneylenders, who charged exorbitant interest. She also informed the villagers about various loan facilities that the government set up to buy seed and fertilizer.

Concrete, electrified buildings with windows and doors have replaced thatched windowless huts. Long stretches of lush green fields line both sides of the tarred road to the village. Almost every family has a motorbike, and some have cars, as well.

“Sister Rani Maria had laid the foundation stone for this transformation. She taught us to stand on our legs. Our village, with hope, has truly become a place of joy,” Solanki said.

Manju Rathore, a government schoolteacher in the village, said the nun also built a pond near the bore well to store water for farming. Rathore, now in her late 30s, credits Blessed Rani Maria for her master’s degree that got her the job.

“If the sister had not encouraged my parents to send me to school, I would not have become what I am today,” she said.

As the villagers’ dependency on moneylenders declined, the landlords felt the pinch. Their laborers had started demanding the wages set by the government, Solanki said.

This enraged the moneylenders, who decided to get rid of the nun. Solanki said villagers had no inkling of the plan — they would have protected Blessed Rani Maria at any cost.

Father Santosh Tigga, who worked as the Udainagar pastor for eight years before his recent transfer, said Blessed Rani Maria had succeeded in infusing villagers with confidence to fight for their rights. The villagers loved the martyred nun “so much that they would share with her all their problems,” he said. “She made a big difference in their lives within a very short period.”

The priest said he learned from the villagers that Blessed Rani Maria had not helped materially, but “played a very crucial role in motivating them to fight against poverty and illiteracy and start income-generation projects.”

Sikdar Chauhan, a 50-year-old farmer of Shivan Pani, a village of about 150 families, agreed with the priest. The father of seven said the nun had helped “immensely” to bring his family out of debt to work for a better future.

“We are illiterate and lived in poverty, as we were totally dependent on seasonal rains and occasional work we got from landlords,” said Chauhan, who now harvests multiple crops from his three acres of land.

“I go to the market every other day to sell vegetables,” he said. With the earnings, he bought a tractor and built a two-story house. His grandchildren now go to school.

“All this unimaginable turnaround was possible because of Sisterji,” he said, using a respectful term for the nun.

“She showed us how to earn from almost barren land and use our abilities for our welfare,” said his wife, Bhoori Bai.

The provincial said Rani Maria’s intimacy with God helped her never to succumb to pressure from moneylenders and landlords.

“She has proved that we can live the Gospel even at a time the country faces serious persecutions and attacks. She showed us how to live the Gospel practically,” she said.

Contributing to this story was Aditya Rodrics in Indore.

Thomas is a freelance journalist based in Bhopal, India.

NEXT: Panel looks at future of religious minorities victimized by IS militants