Panel looks at future of religious minorities victimized by IS militants 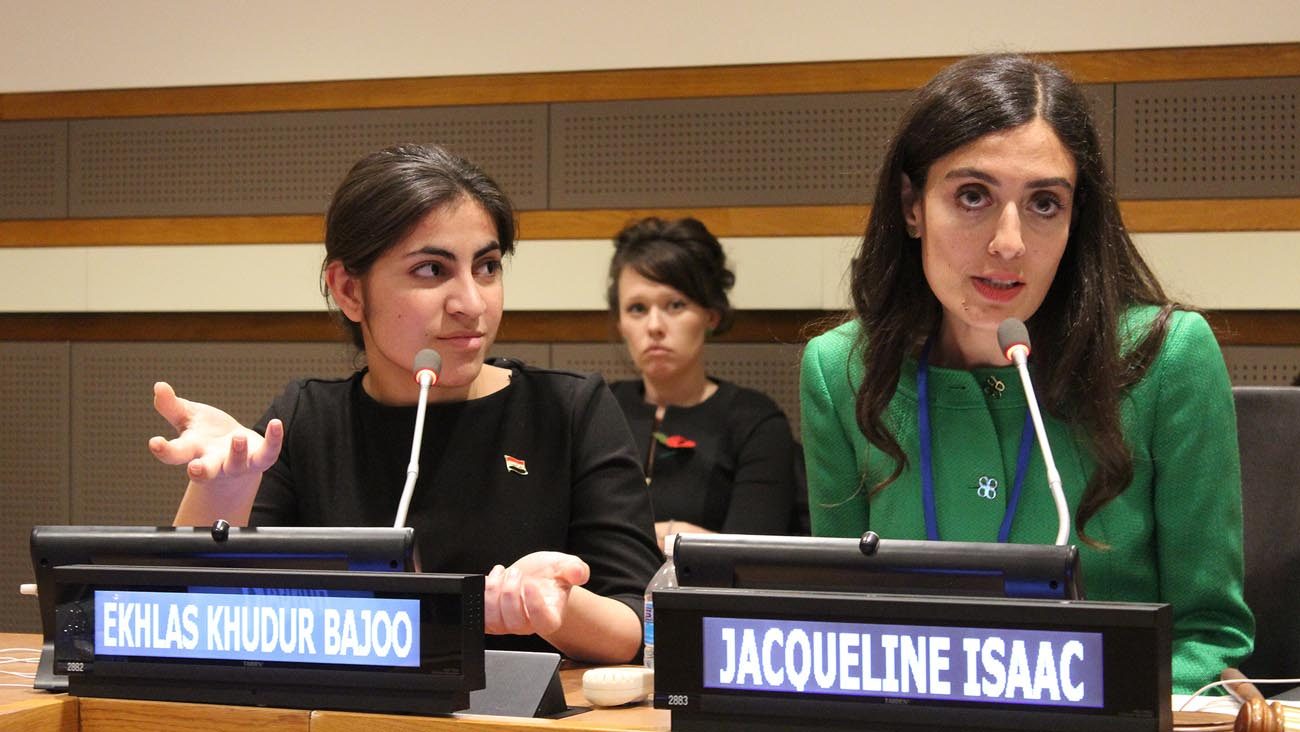 Ekhlas Khudur Bajoo of Iraq gestures as she listens to Jacqueline Isaac during a Nov. 2 forum at U.N. headquarters in New York. Bajoo, 17, experienced six months of daily rape and humiliation by Islamic State militants who kidnapped her when she was 14. She said she sees herself as a symbol of hope for religious and ethnic minorities victimized by IS. (CNS photo/courtesy United Nations)

UPDATED – UNITED NATIONS (CNS) — The day she succeeded in her fourth attempt to escape six months of daily rape and humiliation by her Islamic State captors, Iraqi teen Ekhlas Khudur Bajoo made a vow.

“(I) promised myself not to stop until I brought justice. I’m fighting for all women and minority groups inside Iraq,” she said.

Bajoo, now 17, told a Nov. 2 U.N. forum she sees herself as a symbol of hope for religious and ethnic minorities victimized by IS.

She is a Yezidi, an ancient ethno-religious minority indigenous to what is now northern Iraq. IS militants attacked Yezidis in August 2014, when Bajoo was 14. They kidnapped 6,000 women and girls and killed 5,800, including Bajoo’s father.

Using the common Arabic name for IS, Bajoo said through an interpreter: “We want justice for the Daesh perpetrators, that they will be held accountable. What happened to us was a genocide. We want safety so we can live in peace.”

A receptive, capacity crowd heard Bajoo, a former Syrian captive, U.N. ambassadors and leaders of aid organizations discuss “Peace, Reconciliation and Justice: The Future of Religious and Ethnic Minorities Victimized by Daesh” at a conference organized by the Vatican’s Permanent Observer Mission to the United Nations.

“Gabi,” a 48-year-old Syrian Christian man whose identity was obscured in a taped interview, described being abducted and prepared for beheading for being “an infidel Christian.”

He said his status as a husband and father apparently persuaded his captors to settle for a cash payment from his family in lieu of his execution. He was blindfolded, handcuffed and fitted with an explosive belt for his ride to freedom.

Archbishop Bernardito Auza, the Vatican’s permanent observer to the United Nations, said: “The international community must respond to the outrages systematically committed by Daesh with a rock-solid resolve to prevent similar future abominations from recurring.

“Those entrusted with protecting the innocent and safeguarding respect for fundamental human rights must live up to their indispensable and inescapable responsibility to defend those in danger of suffering atrocity crimes,” he said.

Jonathan Allen, deputy permanent representative of the United Kingdom to the United Nations, said it would be a mistake to think recent losses by IS mean that the job of the world community is complete. There must be “no hiding place” for those who perpetrate evil, he said.

“Where countries work together, it’s harder for poisonous ideologies to take root,” Allen said. The community of nations must work together, but each is responsible for a localized, effective approach to identify and monitor citizens who “try to slip away” to fight with IS, he said.

“Very few of our countries are untouched by Daesh,” Allen said. “People from almost 120 countries are fighting with Daesh in Iraq.” He asked what will happen when they return to their home countries.

Kelley Currie, U.S. representative to the U.N. Economic and Social Council, said words condemning violence are of little use if they are not backed by actions to rebuild lives destroyed by violence and unspeakable crimes.

Archbishop Auza said religious leaders “have a grave and specific duty to confront and condemn the abuse of religious belief and sentiment to justify violence and terrorism against believers of other religions.”

These leaders “must constantly and unequivocally affirm that no one can justly kill in God’s name and say a clear and adamant ‘no’ to every form of violence, vengeance and hatred carried out supposedly in the name of God or religion.”

The archbishop and other speakers said the effort to defeat, punish and disband IS must be concurrent with the eradication of hateful ideologies that motivate extremist groups.

They also need access to psychiatric and medical treatment, legal advice and advocacy for economic and social empowerment, according to Nezar Ismet Taib Abdullah, regional director of health in Dohuk, Iraq. He addressed the forum via video.

“For people to return home, they need a structured strategic plan to encourage peacebuilding and peaceful coexistence. They need to know each other and how their religions are related and learn to accept their differences,” he said. Returnees need safety, security, and assistance to rebuild homes and cities.

Michael Farris, CEO of Alliance Defending Christians, said people must see the relationship between seemingly lesser crimes and the unspeakable ones such as genocide.

When smaller crimes are tolerated, including those based on religion, it becomes acceptable to inflict larger human rights violations, he said. Nonetheless, when crimes cannot be prevented, they must be punished, he said.

Edward Clancy, director of outreach and evangelization for Aid to the Church in Need, said his group is working to rebuild homes for 95,000 displaced Christians who fled IS violence in the Ninevah Plains of Iraq in 2014.

Among other efforts to help persecuted Christians is a plan by the Knights of Columbus to rebuild Karamles, a predominantly Christian town in Iraq destroyed by IS.

The resolution charged IS with a litany of abuses including, “murder, kidnapping, hostage-taking, suicide bombings, enslavement, sale into or otherwise forced marriage, trafficking in persons, rape, sexual slavery and other forms of sexual violence, recruitment and use of children, attacks on critical infrastructure as well as its destruction of cultural heritage including archaeological sites, and trafficking of cultural property.”

The resolution urged establishment of a U.N. investigative team to hold IS accountable.

On Oct. 25, U.S. Vice President Mike Pence said U.N. efforts failed to help persecuted Christians and other minority religious communities in the Middle East. Pence said aid from the United States to those persecuted in the region would henceforth be routed through the U.S. Agency for International Development and faith-based and private organizations.

The Nov 2 event was co-sponsored by the U.N. NGO Committee on the Freedom of Religion or Belief and the Roads of Success organization.

NEXT: Pope offers prayers for victims of Texas shooting