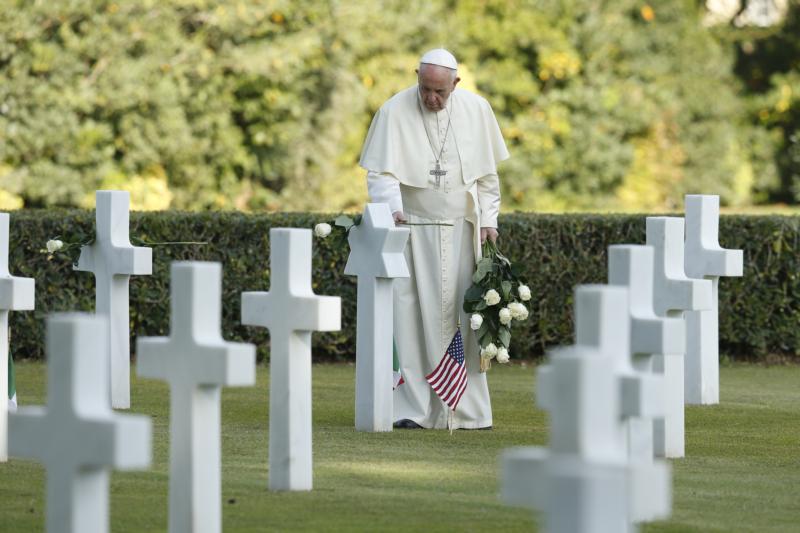 Pope Francis lays roses on graves at the Sicily-Rome American Cemetery and Memorial in Nettuno, Italy, Nov. 2. He commemorated all those who died in war by celebrating Mass at the cemetery, where thousands of American soldiers were killed during World War II. (CNS photo/Paul Haring)

NETTUNO, Italy (CNS) — “No more, Lord, no more (war)” that shatters dreams and destroys lives, bringing a cold, cruel winter instead of some sought-after spring, Pope Francis said looking out at the people gathered for an outdoor Mass at a U.S. war memorial and cemetery.

“This is the fruit of war: death,” he said, as the bright Italian sun lowered in the sky on the feast of All Souls, Nov. 2.

On a day the church offers special prayers for the faithful departed with the hope of their meeting God in heaven, “here in this place, we pray in a special way for these young people,” he said, gesturing toward the rows of thousands of graves.

Christian hope can spring from great pain and suffering, he said, but it can also “make us look to heaven and say, ‘I believe in my Lord, the redeemer, but stop, Lord,” please, no more war, he said.

“With war, you lose everything,” he said.

Before the Mass, Pope Francis placed a white rose atop 10 white marble headstones; the majority of the stones were carved crosses, one was in the shape of the Jewish Star of David.

As he slowly walked alone over the green lawn and prayed among the thousands of simple grave markers, visitors recited the rosary at the World War II Sicily-Rome American Cemetery and Memorial site in Nettuno, a small coastal city south of Rome.

In previous years, the pope marked All Souls’ Day by visiting a Rome cemetery. This year, he chose to visit a U.S. military burial ground and, later in the day, the site of a Nazi massacre at the Ardeatine Caves in Rome to pray especially for all victims of war and violence.

“Wars produce nothing other than cemeteries and death,” he said after reciting the Angelus on All Saints’ Day, Nov. 1. He explained he would visit the two World War II sites the next day because humanity “seems to have not learned that lesson or doesn’t want to learn it.”

In his homily at the late afternoon Mass Nov. 2, Pope Francis spoke off-the-cuff and said people do everything to go to war, but they end up doing nothing but destroying themselves.

“This is war: the destruction of ourselves,” he said.

He spoke of the particular pain women experience in war: receiving that letter or news of the death of their husband, child or grandchild.

So often people who want to go to war “are convinced they will usher in a new world, a new springtime. But it ends up as winter — ugly, cruel, a reign of terror and death,” the pope said.

Today, the world continues to head off fiercely to war and fight battles every day, he said.

“Let us pray for the dead today, dead from war, including innocent children,” and pray to God “for the grace to weep,” he said.

Among the more than 7,800 graves at the Nettuno cemetery, there are the remains of 16 women who served in the Women’s Army Corps, Red Cross or as nurses, as well as the graves of 29 Tuskegee airmen. Those buried or missing in action had taken part in attacks by U.S. Allies along Italy’s coast during World War II.

After the Mass, the pope visited the Ardeatine Caves, now a memorial cemetery with the remains of 335 Italians, mostly civilians, brutally murdered by Nazi German occupiers in 1944.

The pope was led through the long series of tunnels and stopped to pray several minutes in silence at a bronze sculpted fence symbolizing the twisted, interlocking forms of those massacred. Walking farther along the dark corridors, he placed white roses along a long series of dark gray cement tombs built to remember the victims.

The victims included some Italian military, but also political prisoners and men rounded up in a Jewish neighborhood. They were all shot in the back of the head in retaliation for an attack on Nazi soldiers. The Nazis threw the bodies into the caves and used explosives to seal off access. After the war, a memorial was built on the site.

Rabbi Riccardo Di Segni, chief rabbi of Rome, sang a short prayer, and the pope prayed to God, merciful and compassionate, who hears the cries of his people and knows of their sufferings. Through the risen Christ, Christians know that God is not the god of death, “but of the living, that your covenant of faithful love is stronger than death and a guarantee of resurrection,” he said.

After returning to the Vatican, the pope was to visit the grotto under St. Peter’s Basilica, where many popes are buried.