‘Horrendous attack weighs on all our hearts,’ says cardinal 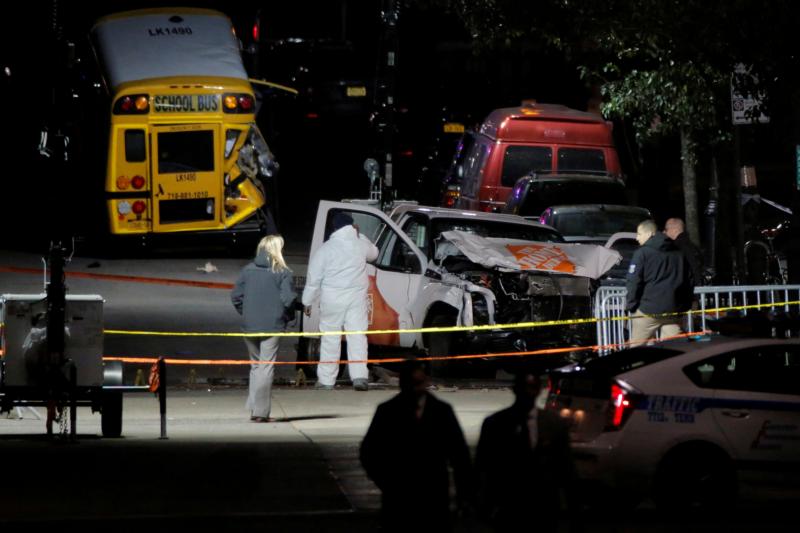 Police investigate the crime scene early Nov. 1 after a man driving a rented pickup truck ran down pedestrians and cyclists on a bike path alongside the Hudson River in New York City. The incident occurred near the World Trade Center memorial, killing at least eight and seriously injuring 11 in what the Mayor Bill de Blasio called “a particularly cowardly act of terror.” (CNS photo/Andrew Kelly, Reuters)

WASHINGTON (CNS) — The “horrendous act” by a driver in a pickup truck who mowed down pedestrians and bicyclists in New York late in the afternoon Oct. 31 “weighs on all of our hearts,” said the president of the U.S. Conference of Catholic Bishops.

“This afternoon we heard of what appears to be a deliberate attack on innocent people in New York City,” Cardinal Daniel N. DiNardo of Galveston-Houston said in a statement issued that evening.

News reports about the attack, which left at least eight people dead and 11 others injured, “are too preliminary to understand fully what has happened,” the cardinal said, “but it grieves me deeply that we must again respond to such acts of terror.”

After reciting the Angelus Nov. 1, Pope Francis deplored the attack, adding, “I pray for the deceased, for the injured and for their families.”

New York Cardinal Timothy M. Dolan said that once again “another act of senseless violence” has stunned and horrified” the country. He urged all people to have greater understanding and greater respect for one another so “evil acts like this” will never happen again.

News reports said police identified the suspect as 29-year-old Sayfullo Saipov, who is from Uzbekistan and has been in the United States on a visa since 2010. He allegedly drove about a mile along a busy bike path near the World Trade Center at about 3 p.m. Eastern time before he slammed into a school bus.

He exited the truck, believed to be a vehicle he rented in New Jersey, and was holding what looked like weapons, but later was said to be a paintball gun and a small pellet gun.

Before he could be apprehended, he was shot by police. He was taken into custody and admitted to a hospital for treatment of his wounds, which were not believed to be life threatening.

“To the family and friends of those who have died, please know that you are not alone, and that the prayers of the bishops and of all the church are with you and your loved ones,” Cardinal DiNardo said.

“To you and to everyone, I would like to say that the forces of darkness always try to wipe away our hope,” he said, “but our hope is in the name of the Lord and will always remain firm. Let us remember the words of the Lord to prophet Joshua: Be strong and steadfast! Do not fear nor be dismayed, for the Lord, your God, is with you wherever you go.”

In his remarks at the Vatican, Pope Francis said, “I am deeply saddened by the terrorist attacks in the past few days in Somalia, Afghanistan and yesterday in New York. In deploring such acts of violence, I pray for the deceased, for the injured and for their families.”

“We ask the Lord to convert the hearts of terrorists and free the world from hatred and from the murderous folly that abuses the name of God to spread death,” he said.

In his Oct. 31 statement, Cardinal Dolan said: “While details continue to emerge, one thing is clear: Once again, no matter our religion, racial or ethnic background, or political beliefs, we must put our differences aside and come together in faith and love to support those who are injured, pray for those who have died as well as their families and loved ones, and work toward greater respect and understanding among all people so that heinous and evil acts like this become a thing of the past.”

Shortly after hearing news reports about the attack, Bishop Michael F. Burbidge of Arlington, Virginia, tweeted: “Let us pause to pray for those killed and injured in Lower Manhattan as we ask God to watch over us in our hour of need and always.”

The New York attack was being investigated as terrorism, according to CNN, which quoted New York Mayor Bill de Blasio as saying it was “an act of terror and a particularly cowardly act of terror.” But he also said New Yorkers are resilient. He called on all to be vigilant as the city’s Halloween parade went on as planned. It drew about several thousand people.

CBS News reported the suspect yelled “Allahu Akbar,” Arabic for “God is great,” when he got out of the truck he was driving.

Five of those who died were part of a larger group of longtime friends visiting from Argentina.

President Donald Trump said in a statement: “Our thoughts and prayers are with the victims of today’s terrorist attack in New York City and their families.”

Contributing to this story were Julie Asher in Washington and Junno Arocho Esteves in Rome.