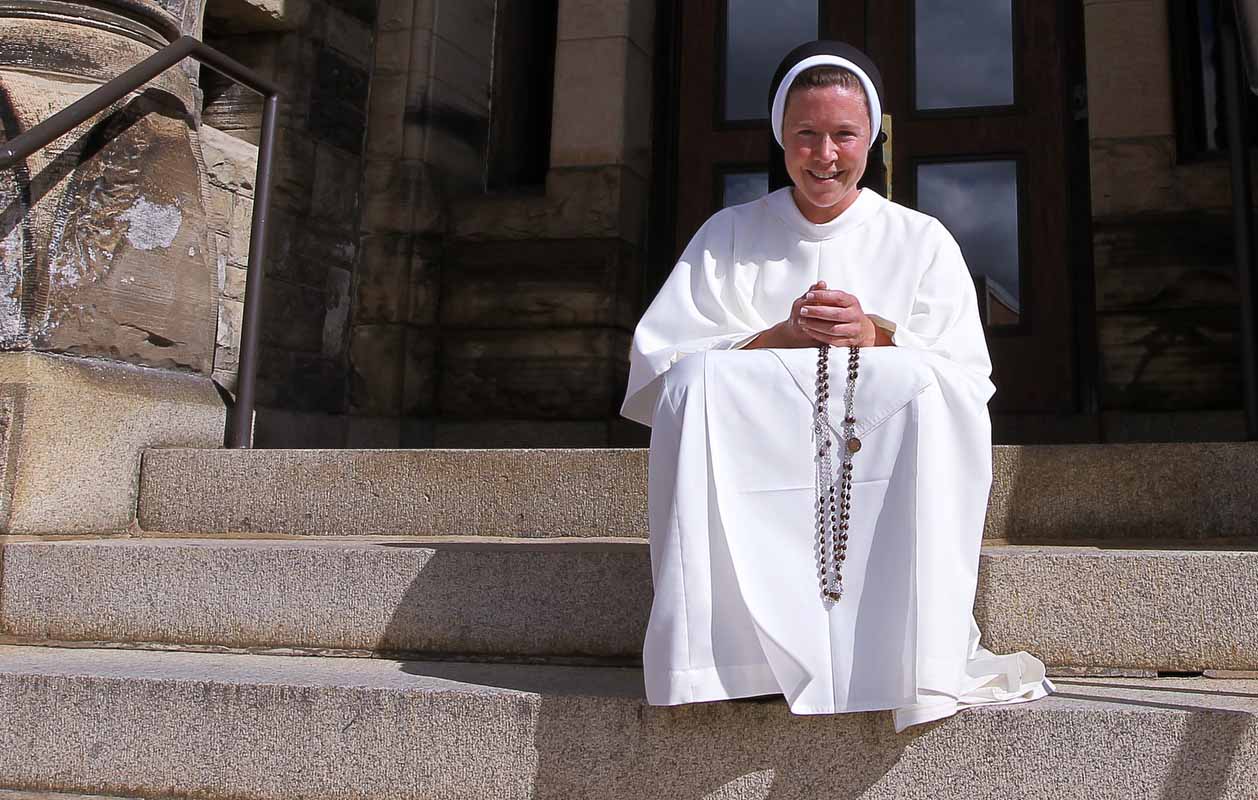 Sister Anna Wray, a Dominican Sister of St. Cecilia, poses for a photo on the campus of The Catholic University of America in Washington Oct. 24. (CNS photo/Tyler Orsburn)

There is something about the quiet time in prayer that has spoken powerfully to her over the years making her understand God a little more and also get a clearer sense of her path in life.

It’s where — as a self-described “not particularly pious” teenager — she said she felt God’s love profoundly even though she was just joining some high school friends for early morning weekday adoration without really knowing what it was. She was drawn in by the group and the appeal of breakfast afterward before school started.

It’s also where she went some evenings in college and, as she put it, parked herself one night during her senior year, desperate for direction. At the time, she was dating and had already considered a religious vocation and neither fit felt right. There, in the quiet chapel tucked between classrooms, she got a clear sense of what God wanted her to do, not with specific details or through a thundering voice, but an answer to what she had been seeking: a sense of peace and a realization she should pursue the religious life.

And now, 15 years from those college days, Sister Anna, a Dominican Sister of St. Cecilia, finds herself frequently back at that chapel at The Catholic University of America in Washington while on the school’s campus working on her doctorate in philosophy. A philosophy major as an undergrad, she now teaches a freshman philosophy class while writing a dissertation on Aristotle, the ancient Greek philosopher who lived in the 300s B.C.

As a student nearly two decades ago, she might not have believed she would someday be back on campus, as a sister no less, dressed in a long white habit and black veil.

That’s because when she came to Catholic University she had no sense of women religious. She hadn’t known any sisters from her hometown of New Canaan, Connecticut, or from the public high school she attended. When she got to college, she was so shocked to see a Dominican friar walking in a long flowing white robe that she followed him and finally asked him who he was.

He invited her to join him at vespers with the Dominicans and Sister Anna, then simply Andrea Wray, was taken aback by the prayers and watching the priests and brothers. “I want this,” she thought, and when she found out the Dominican order also had sisters, it seemed a natural fit for her.

But she also was not about to do what seemed so obvious.

Sister Anna visited the Dominicans of St. Cecilia at their motherhouse in Nashville, Tennessee, during a spring break. After her stay, which raised a lot of questions in her mind, she decided the community wasn’t for her.

She wondered if she was cut out for religious life, if she needed to find a different community, or if she should pursue a relationship and even marriage.

In the confusion years later, she simply asked the question: “Lord what do you want?” that night in the chapel. The answer she felt was simple but poignant. She felt God wanted her to follow him, or as she described it: He wanted her heart. When she realized this, she felt at peace.

“It was a huge grace that it was God calling me,” she said.

Sister Anna went back to the Dominicans where she professed her final vows in 2009. She even embraced teaching — a charism of the Dominicans that she initially wondered if she could do. “Once I was in the classroom I loved it,” she said of her experience teaching kindergarten and then high school and college classes.

She said the job puts you “closer to souls” than most other roles, other than parents, adding that “education is a mission field.”

She also said Dominicans “go where we are sent,” which for her in 2008 meant going to Australia as part of a delegation to assist with preparations for World Youth Day.

Her own World Youth Day experience in 2000 in Rome also helped influence who she is today. She said she took to heart the message of St. John Paul II who said: “Do not be afraid to live the Gospel directly.”

“That is something I have tried to do ever since,” she told CNS in an interview nine years ago.

And these days, as the number of young women joining the Nashville Dominicans continues to increase, Sister Anna is not surprised.

As she sees it: “The steady stream of young women are drawn by God’s voice and the presence of the Holy Spirit in us.”

NEXT: ‘Horrendous attack weighs on all our hearts,’ says cardinal