Bishop Luong dies; he was ‘a blessing’ to Vietnamese Catholics in U.S. 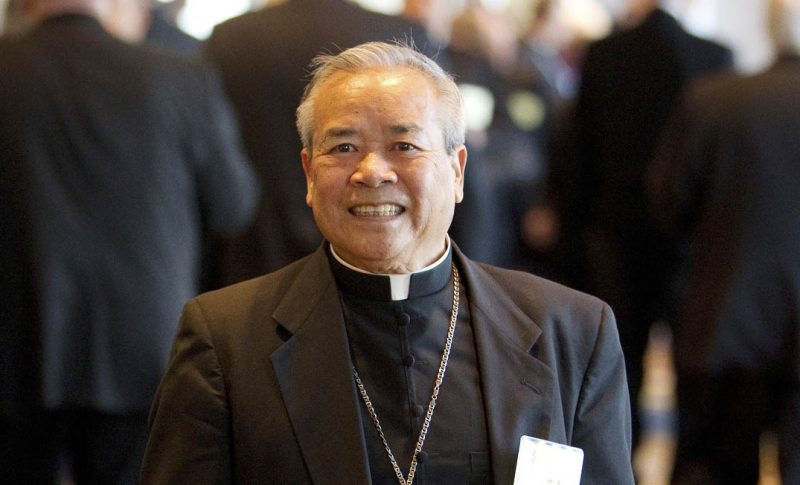 Auxiliary Bishop Dominic Mai Luong of Orange, Calif., is pictured in a 2011 photo. The first Catholic bishop of Vietnamese descent in the United States, he died in Orange Dec. 6 at age 76. He was the founding father of the Vietnamese Catholic community in the Archdiocese of New Orleans and had been an auxiliary bishop in the Orange Diocese since 2003. (CNS photo/Nancy Phelan Wiechec)

Auxiliary Bishop Dominic Mai Luong of Orange, Calif., is pictured in a 2011 photo. The first Catholic bishop of Vietnamese descent in the United States, he died in Orange Dec. 6 at age 76. He was the founding father of the Vietnamese Catholic community in the Archdiocese of New Orleans and had been an auxiliary bishop in the Orange Diocese since 2003. (CNS photo/Nancy Phelan Wiechec)

NEW ORLEANS (CNS) — Bishop Dominic M. Luong, the first U.S. Catholic bishop of Vietnamese descent and the founding father of the Vietnamese Catholic community in the Archdiocese of New Orleans, died Dec. 6 in Orange, California. He was 76.

Bishop Luong, an auxiliary bishop of Orange from 2003 until his retirement in 2015, died in St. Joseph Hospital of heart and kidney failure, said longtime friend Tony Tran of Mary Queen of Vietnam Parish in New Orleans East.

Then-Father Luong established the parish for the thousands of Vietnamese refugees who had fled their country.

“When the Vietnamese community came to New Orleans in the mid-1970s, he was in many ways their priest,” Archbishop Aymond said.

He was ordained to the priesthood in 1975, one year before New Orleans Archbishop Philip Hannan invited Father Luong to move to New Orleans from Buffalo, New York, to care for the huge influx of Vietnamese Catholics.

“He also, in many ways, was the father of the Vietnamese Catholics who came to New Orleans. He has been greatly revered by the Vietnamese community, not only those at Mary Queen of Vietnam Parish but throughout our archdiocese,” Archbishop Aymond said.

Bishop Luong would have turned 77 Dec. 20, but his health began failing recently, Tran said, and he began dialysis for kidney failure.

Tran said about 50 people, most of them from Mary Queen of Vietnam, including Father Nghiem Van Nguyen, pastor, were planning to fly to California to attend the funeral.

“To us, he is our father,” Tran told the Clarion Herald, newspaper of the New Orleans Archdiocese. “He took care of almost everything with the first arrival of the Vietnamese refugees. The English language was a problem for most of the families in the community, and they relied heavily on him for his translations.”

It got to the point where Father Luong was on 24-hour call, even for women going into labor to deliver their babies.

“Every woman who was giving birth would call Father Dominic, and he was running back and forth,” Tran said. “People would call him for big things and little things, the whole nine yards — they would call their pastor.

“It was a blessing that God sent him to our community to be that person to help the community and the people from scratch.”

History was made on June 11, 2003, when in the white marble sanctuary of St. Columban Church, 33 bishops lined up to give an episcopal kiss to Bishop Luong, the first Vietnamese bishop to be ordained in America.

Two native Vietnamese bishops were able to come to the ordination Mass, and the three men embraced each other at the end of the welcoming line.

“We have together recorded a historic moment in the history of the universal church, a new page in the history of the church of America and a new chapter for the church of the Orange Diocese,” Bishop Luong told the 1,200 gathered for the three-hour liturgy. “We are all united in one mission — to love God, to make God known and to be his collaborators in the evangelization not only of the church but of all cultures.”

Unity was the major theme of his episcopal service. He chose as his bishop’s motto: “Strangers and aliens no longer.” That scriptural verse from the second chapter of Ephesians had both personal and cultural significance.

Bishop Luong arrived in the U.S. as a 15-year-old and entered the minor seminary, but because of the outbreak of the Vietnam War, he could not return to his country and he constantly feared for his family’s safety.

After his ordination to the priesthood in Buffalo in 1966, Bishop Luong served for 10 years in the Buffalo Diocese but became actively involved on the national level in the pastoral care of the thousands of Vietnamese refugees who had escaped their country by boat before the fall of Saigon.

He arrived in 1976 at the invitation of Archbishop Hannan, who asked him to care for the 12,000 refugees who had arrived in south Louisiana. Most of those refugees came from seven fishing villages in Vietnam and were primarily Catholic, but they faced hostility upon their arrival because their fishing customs clashed with those of Americans, and they were perceived as taking away jobs from local residents.

Over the next 25 years, Bishop Luong united and transformed that community into a spiritual and economic powerhouse in New Orleans. In 2003, when he left for Orange, there were 34 Vietnamese priests in the Archdiocese of New Orleans. In his first altar server class of 1976, seven became doctors and three became lawyers.