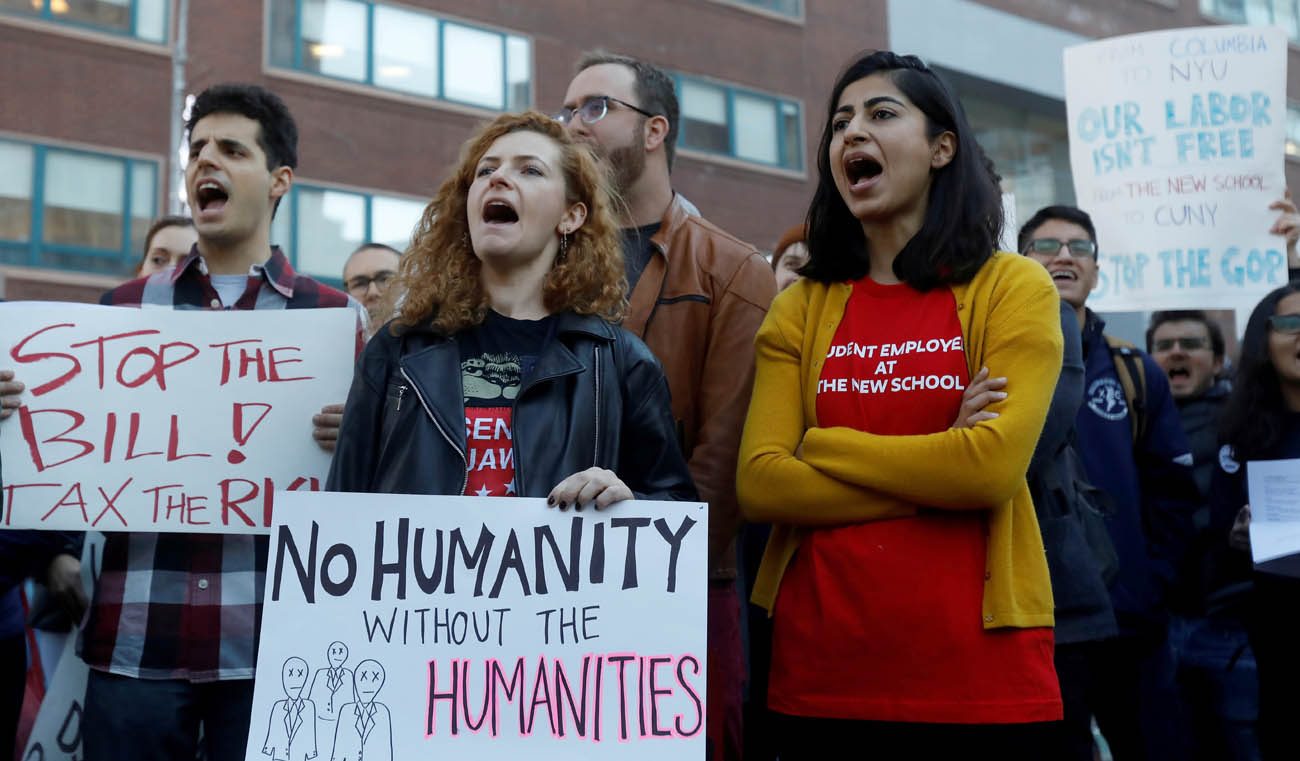 Graduate students rally against the proposed federal tax reform bill Nov. 29 in the Manhattan borough of New York City. Congress must "fix the fundamental flaws" in both the Senate and House versions of the tax bill as lawmakers try to reach an agreement on a final bill, said the chairman of the U.S. bishops' domestic policy committee. (CNS photo/Shannon Stapleton, Reuters)

WASHINGTON (CNS) — Congress must “fix the fundamental flaws” in both the Senate and House versions of the tax reform proposal as lawmakers try to reach an agreement on a final bill, said the chairman of the U.S. bishops’ Committee on Domestic Justice and Human Development.

Bishop Frank J. Dewane of Venice, Florida, the chairman, issued a statement Dec. 2 in response to Senate passage of the Tax Cuts and Jobs Act in a 51-49 vote at 1:50 a.m. Washington time. Both chambers must meet in conference to reconcile differences in the two measures to bring a final bill to a vote.

“Congress must act now to fix the fundamental flaws found in both bills, and choose the policy approaches that help individuals and families struggling within our society,” said Bishop Dewane.

“We are reviewing the final Senate bill and will soon provide analysis about key improvements that are necessary before a final agreement should be reached and moved forward,” he said.

“For the sake of all people — but especially those we ought, in justice, to prioritize — Congress should advance a final tax reform bill only if it meets the key moral considerations outlined in our previous letters,” Bishop Dewane said.

He was referring to Nov. 9 and Nov. 22 letters from the U.S. Conference of Catholic Bishops addressing the House and Senate versions, respectively.

Quoting St. John XXIII’s 1961 social encyclical, “Mater et Magistra,” the bishops said that “decisions about taxation involve fundamental concerns of ‘justice and equity,’ with the goal of taxes and public spending ‘becoming an instrument of development and solidarity.'”

Because tax-policy is “so far-reaching,” they also urged Congress to provide “ample time for Americans to discuss the complexities of these reforms and fully understand their effects.”

The letter referenced Bishop Dewane’s Oct. 25 letter to House members in which he offered moral guidelines for lawmakers to consider in any tax reform proposal.

The guidelines focused on the country’s responsibilities to care for the poor; form and strengthen families; develop a progressive tax code; raise adequate revenues for the sake of the common good; avoid cuts to poverty programs to finance any tax cuts; and incentivize charitable giving.

Overall, in light of those moral guidelines, the Nov. 9 letter called the Tax Cuts and Jobs Act of 2017 “unacceptable” as currently written and said it contained “many fundamental structural flaws that must be corrected.”

The three signers praised the provision to double the standard deduction, saying that it “will help some of those in poverty to avoid tax liability, and this is a positive good contained in the bill.” But the bishops also said that because tax-policy is “so far-reaching,” Congress also must provide “ample time for Americans to discuss the complexities of these reforms and fully understand their effects.

“As written, (it) will raise income taxes on the working poor while simultaneously providing a large tax cut to the wealthy,” Bishop Dewane said. “Tax breaks for the financially secure, including millionaires and billionaires, should not be made possible by increased taxes to families struggling to meet their daily needs.”

“The Senate bill avoids some of the pitfalls of the House bill by not tampering with the adoption tax credit or the exclusion for employer adoption assistance programs, and by retaining the out-of-pocket medical expenses deduction, which is a lifeline for families facing serious and chronic illnesses,” Bishop Dewane added. But he found little in the measure to commend.