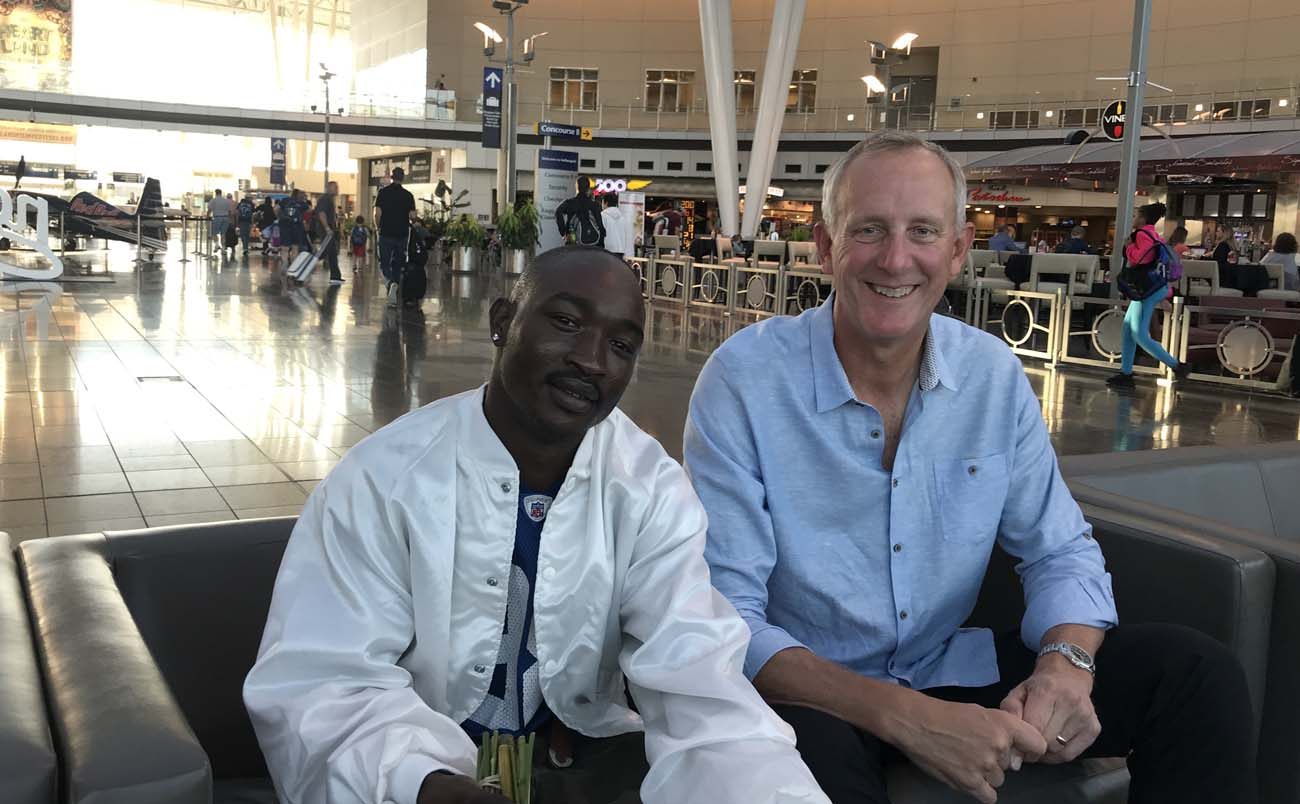 During his first year of adjusting to life in the United States, Sudanese refugee Bershlmaws "Alo" Koko has relied upon the guidance and friendship of Fritz French, a member of Immaculate Heart of Mary Parish in Indianapolis. French is a volunteer mentor with the Indianapolis Archdiocese's Refugee and Immigrant Services program of Catholic Charities. (CNS photo/John Shaughnessy, The Criterion)

INDIANAPOLIS (CNS) — For nearly an hour, the young man stood anxiously near the exit of a concourse at Indianapolis International Airport. Holding a bouquet of red roses, he repeatedly strained to see down the long corridor, waiting for his family to appear.

Finally — at last — he saw them in the distance; his anxiety disappeared as his face burst into a smile. He stood on his toes and waved at them, eyes glowing.

Within seconds, he embraced his father and greeted four of his sisters, two brothers and a nephew, making his way toward his mother. Handing her the roses, he wrapped her in his arms. Her face reflected the joy and emotion of a mother reunited with her child.

For the young man nicknamed “Alo” and his family, it was a long-awaited moment of thanksgiving. Since the family fled their homeland of Sudan as refugees in 2001, they have dreamed of coming to the United States to start a new life — one without fear, one with freedom.

The dream came true with the assistance of the Catholic Charities Indianapolis’ Refugee and Immigrant Services program, which has helped 20,000 people during the last 40 years.

Alo, whose given name is Bershlmaws Koko, arrived in Indianapolis in January. He and his family spent 16 years in Egypt while waiting for clearance from the U.S. government to travel to America. Reunited with his family, Alo said, “Everything is good. I’m just so happy to see my family.”

The reunion is just part of the story for the 23-year-old Sudanese native. So is the first year of his life in the U.S., a year of change, challenge and cultural shock in which he has been helped by his Catholic Charities volunteer mentor, Fritz French.

After arriving, Alo faced the same challenges that confront many refugees: separation from family, poor command of English, adjustments to an unfamiliar culture, and no knowledge of how to navigate life in a new country.

Refugee and Immigrant Services provided support for housing, food, clothing and job-readiness classes and linked Alo with French, a longtime business professional who has allegiances to Immaculate Heart of Mary and St. Luke the Evangelist parishes, both in Indianapolis.

French, 58, was looking for an opportunity to “help people at the ground level, to roll up my sleeves in a personal way.” As the father of a 21-year-old daughter and a 19-year-old son, he felt drawn to the challenges Alo faces.

“I treat him like a son, trying to push him in the right direction,” French told The Criterion, newspaper of the Indianapolis Archdiocese. “I helped him get into a single apartment and how to get checks from the bank. He had no idea what a check was. I try to help him with the practical things, like how to pay his electrical bill and get rental insurance.

“These are all simple things, but for a guy who doesn’t speak English, it’s hard. When you first meet him, you realize he’s a little scared of where he is, and what’s going on.”

Through it all Alo has been working full time at a warehouse distribution center. He also started taking English language classes.

“He’s had to grow up pretty quickly,” French said. “The language barrier has gotten a little better. His mother tongue is Arabic, and he also speaks a second, Sudanese language. Just because of the language barrier, I’m not sure of the impact I’m having, but he does listen. I talk to him about the importance of being a hard worker. He’s gotten a pay increase. That’s awesome.”

On the night Alo’s family arrived French drove him to the airport. There, he bought Alo a cup of coffee and tried to calm him as the young Sudanese kept checking his watch and heading to the concourse exit.

When it was clear that the family’s plane had arrived and more than 40 minutes had passed without family members in sight, French went to the airline counter where his suspicion was confirmed: no one at the arrival gate had told Alo’s relatives how to leave the airport after their journey from Egypt to Germany to Chicago to Indianapolis.

Minutes later, after a counter agent called the gate at French’s request, the family strode down the concourse toward Alo. French photographed the happy reunion.

Throughout the evening, from the airport to the apartment complex where the family would live, Alo never said much about what French was doing, but it was evident how much he trusted his mentor and relied on his guidance.

Indeed, the effort that French made seemed to reflect the “Share the Journey” campaign that Pope Francis introduced Sept. 27. The program is designed to encourage Catholics to find ways to support and welcome refugees and migrants.

French has learned how much of a difference such an approach can make in the lives of refugees and the people who support them during the time he has been at Alo’s side.

“I really didn’t know about the refugee program, but for me it’s very rewarding,” explained French, who meets with Alo two or three times a week. “You see the humanity of the people, and you hope you’re helping them in some way. It’s made me more sympathetic to the plight of the refugees.”

The experience also has taught French a sense of perspective and humility.

“We all live comfortable lives here (in America),” he said. “You realize how fortunate you are to be born where you are, and in this time where you are. Not everybody has been that fortunate.