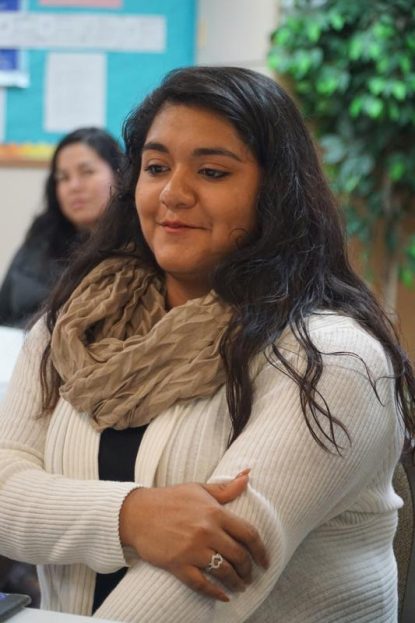 SPRINGFIELD, Ky. (CNS) — Holding the Lectionary high, Mirna Lozano processed into St. Dominic Church in late October during the parish’s first young adult Mass, which she organized with the help of her father, Rodrigo.

The father-daughter duo recently earned certification in youth ministry through the Archdiocese of Louisville’s Office of Youth and Young Adults. They are looking forward to seeing youth ministry grow at the parish.

But Mirna’s future in Springfield is uncertain. The 19-year-old native of Mexico was brought to the United States without proper documentation when she was 4 years old. The U.S. is the only home she knows.

For now, she’s protected by the Deferred Action for Childhood Arrivals, or DACA, program. President Donald Trump’s decision to cancel the program — which protects 800,000 young people from deportation — leaves an uncertain future though.

What’s more certain for Mirna and other young Hispanics is fear.

Trump called on lawmakers in Washington to pass a measure to preserve DACA. To that end, advocates around the country have rallied to urge passage of the DREAM Act — the Development, Relief and Education for Alien Minors Act — to provide a pathway to citizenship for DACA beneficiaries, but Congress has yet to act.

The young people who would benefit from the act’s passage, known as “Dreamers,” are afraid they will have to give up their lives in the U.S. and be forced to return to countries they barely remember.

Mirna, who hopes to be a teacher and youth minister, said she feels her future lies in the hands of the federal government. She has voluntarily registered under DACA.

“This is our country. This is all we know,” she told The Record, newspaper of the Archdiocese of Louisville.

Mirna, her father and a group of six other young people, including her younger sister Dora, shared their journeys after the Mass at St. Dominic.

Rodrigo Lozano said his family moved to the U.S. 15 years ago, trading the suffocating violence of Mexico City for the sleepy rural community of Springfield, 59 miles southeast of Louisville. Mirna was 4 and Dora only 3.

He said he came looking for a “better … more peaceful life” for his family. “It’s every parents’ dream,” he said.

Despite a tough economy in Mexico, he had managed to hold a decent job, but Mexico City had become inundated with violence, he said. After being assaulted at gunpoint several times, he felt he had no choice but to leave his homeland. Traveling to the U.S. without documents is a major decision because it’s dangerous, he admitted.

The elder Lozano said he initially traveled north alone to prepare a life for his family. His wife and two daughters joined him about a year later.

When Rodrigo arrived, he did not speak English, had nowhere to live and no clothes to wear. But he found work on farms and sometimes cleaned streets.

“You don’t care how much you’re paid, you just want to work,” he said.

As for regrets, Rodrigo has none.

Since moving to Springfield the family, including a son born in the U.S., have found a home in St. Dominic Church, where they are active parishioners.

Despite the looming threat of deportation, Mirna continues to look ahead. She and her father are proud of their youth ministry certificates and are forming a multi-ethnic youth group at the parish.

Mirna also is active in the community, helping other young people understand their options for higher education despite their legal status. Undocumented young people, even those protected by DACA, do not qualify for federal student aid.

She said he hopes to foster unity and a better understanding between Hispanics and the larger community in Springfield.

DACA is not just a political issue, she noted. It’s about people “striving for a better life.” She wants to help others understand that.

Mirna hopes that Congress will pass the DREAM Act and that there will be a path to legalization for the parents of Dreamers.

Since the president’s decision in September to cancel DACA — he gave Congress six months to act before formally ending the program — Mirna has felt the Catholic Church’s presence and support because it has helped her feel safe.

Father Pepper Elliott, pastor, who celebrates Mass in Spanish for the Hispanic community at St. Dominic Church, said it would be a tragedy to lose the Dreamers.

He held up Mirna’s leadership in organizing the young adult Mass. She graduated from Bethlehem High School in Bardstown, Kentucky., where she was elected president of her senior class, he said.

Young Latinos such as Mirna have grown up in the community and some attended St. Dominic School, he explained, noting that many now are of college and working age, contributing to the community by holding jobs, paying taxes, rent and utilities, buying necessities, such as clothing and cars, and even helping create jobs.

On top of that, Father Elliott added, they add to the community through their family life and values.

Thomas and Able are on the staff of The Record, newspaper of the Archdiocese of Louisville.

NEXT: Knights give aid to churches still rebuilding, repairing after hurricanes