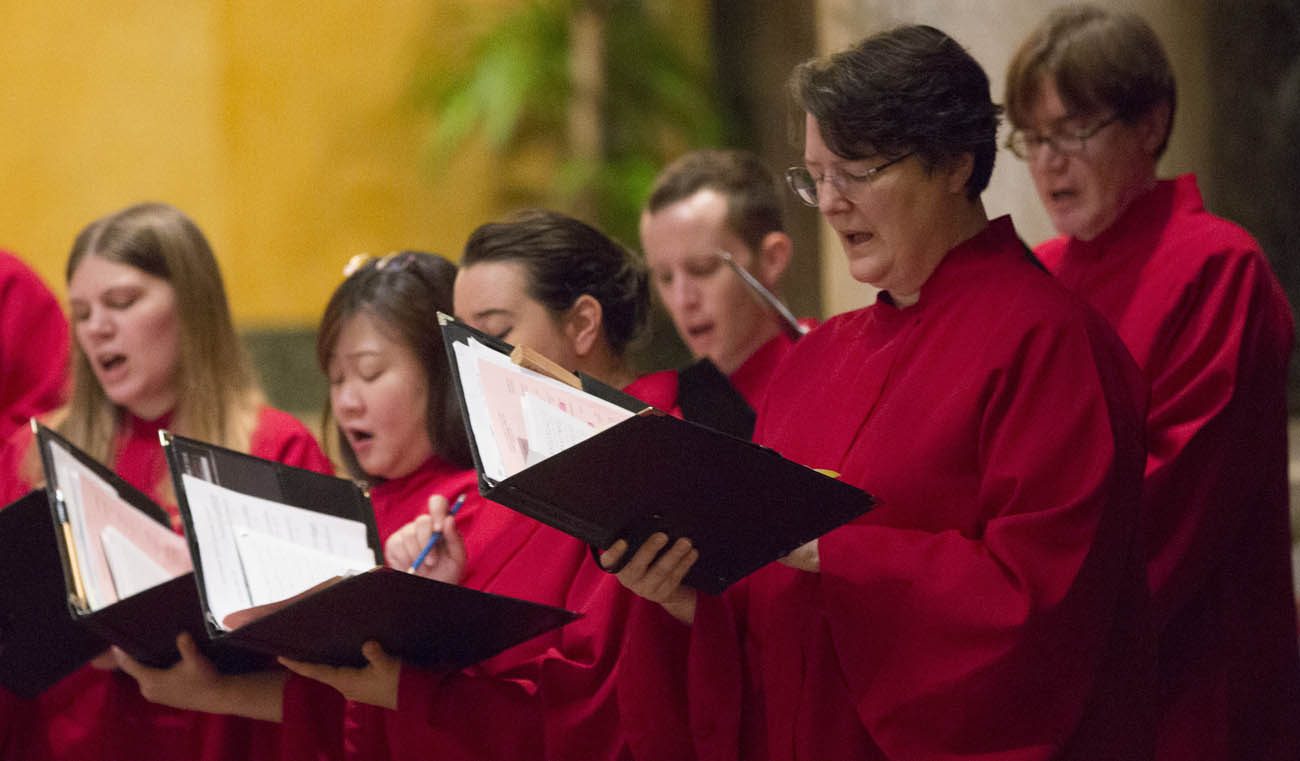 Members of the Schola Cantorum sing Gregorian chant during an Oct. 8 Latin Mass at the Cathedral of St. Matthew the Apostle in Washington. Gregorian chant is the singing of the liturgy and its texts are almost entirely scriptural. (CNS photo/Chaz Muth)

WASHINGTON (CNS) — As Gabe Bouck enters Advent, a season in which Catholics are urged to answer God’s call for conversion, the seminarian is reminded of the melodic voice that inspired him to become Catholic.

The former Baptist recalled attending his first Mass nearly six years ago where he encountered sounds he had never before heard in a church and it was coming from the priest.

“The priest sung the entire Mass,” said Bouck, a first-year seminarian at Theological College, a national seminary at The Catholic University of America in Washington.

This priest sang the liturgy in ethereal tones, mysterious sounds to the young Protestant with a musical background. He was used to music that came in more predictable forms with standard rhyme or meter.

But the reverberations coming from the priest defied the musical logic Bouck had come to expect and it mesmerized him throughout the Mass.

“It absolutely took me to another place altogether,” he told Catholic News Service during an October interview. “There was something about it that immediately brought to my mind, ‘I am experiencing something that is holy right now. There’s something very solemn and very reverent going on in a way that I have never experienced in a Protestant church.'”

He did realize at that moment that he wanted to become Catholic and the sounds he deemed mystifyingly beautiful called him to conversion.

Gregorian chant is a monadic and rhythmically free liturgical chant considered the official music of the Catholic Church.

Not to be confused with liturgical hymns and other sacred music, Gregorian chants are typically unaccompanied sung prayers and official texts of the liturgy and congregation responses.

When the priest is singing portions of the Mass and the congregation sings the response, they are practicing a form of Gregorian chant, said Timothy S. McDonnell, director of the Institute of Sacred Music at The Catholic University of America.

Choirs in some Catholic churches also sing Gregorian chant, both in Latin and English, as part of a repertoire that may include other sacred music.

Though documents from the Second Vatican Council gives Gregorian chant — developed between the seventh and ninth centuries in the Diocese of Rome — pride of place in the Mass, it’s no longer the dominant sound in most Catholic parishes, McDonnell told CNS.

Gregorian chant was largely replaced by more vernacular music following Vatican II, when the traditional Latin Mass was changed to the dominant language of each country.

However, Gregorian chant began to regain popularity in the 1990s and some Catholic parishes began reintroducing it during worship.

Bouck believes it was no mistake that he happened to attend his first Mass where the priest celebrated it completely in Gregorian chant.

Once he settled into parish life at the Catholic Church of the Ascension in Memphis, Tennessee, Bouck joined the choir and eventually became its director.

“We did Gregorian chant, we did contemporary worship type music and traditional hymns,” he said. “But chant was always something that moved me and something that meant a lot to me.”

Bouck’s music ministry and involvement in the church would eventually lead him to consider the priesthood, a vocation he is now seeking in seminary, where he offers his considerable singing talents in the school’s schola.

It’s not uncommon for someone involved in a music ministry to hear the call to the priesthood, said David Lang, music director of Theological College.

“Those men are really engaged in the liturgy, especially if Gregorian chant is featured in their music,” Lang told CNS. “The texts are divinely inspired and when you are singing them it’s like you are praying twice. We shouldn’t be surprised that someone hears God’s call in that circumstance.”

NEXT: Mother of three Dreamers holds fast on Hill for passage of DREAM Act