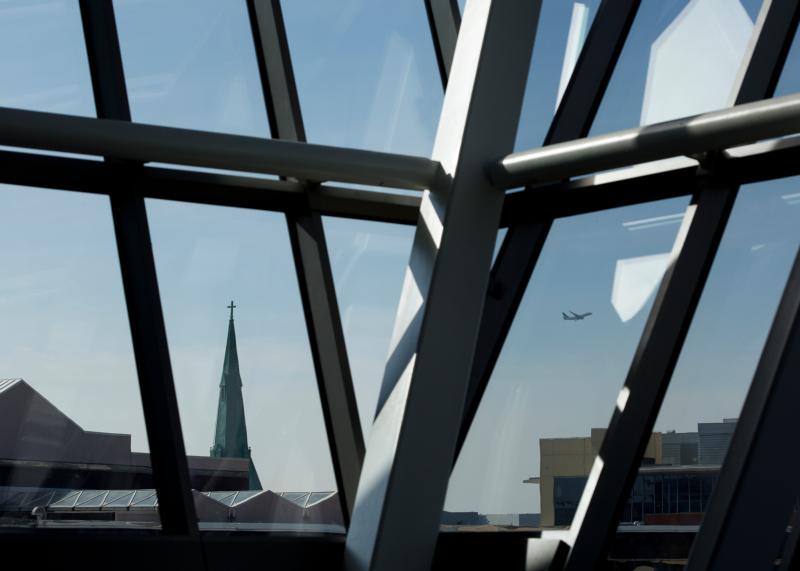 The steeple of St. Dominic Church in Washington is seen from the Museum of the Bible Nov. 15. U.S. Sen. James Lankford, R-Oklahoma, and U.S. Rep. Carolyn Maloney, D-New York, spoke of religious liberty and the protection of conscience during a Washington conference Dec. 5. (CNS photo/Tyler Orsburn)

WASHINGTON (CNS) — Religious liberty and protection of conscience are as worthwhile as exports as they are as American values, two members of Congress reminded a Washington conference Dec. 5.

U.S. Sen. James Lankford, R-Oklahoma, and U.S. Rep. Carolyn Maloney, D-New York, both spoke openly of their own Christian beliefs while addressing the third Archon International Conference on Religious Freedom, sponsored by the Orthodox Order of St. Andrew, Archons of the Ecumenical Patriarchate.

According to organizers, the conference is a direct response to Pope Francis and Ecumenical Patriarch Bartholomew of Constantinople, who expressed their “shared profound concern for the situation of Christians in the Middle East and for their right to remain full citizens of their homelands.”

“Every breath that I have I owe to him. And everything good that’s ever happened in my life is because of him. And I don’t mind articulating that to people. And I want them to have the hope that I have,” he said.

That hope means “a difficult challenge for those of us that are Christ followers,” Lankford said. “To be able to speak out clearly for those who are unjustly oppressed, but to do it in a way that we honor our Lord in a way that he would do it.”

Lankford, a first-term senator, said he thought it was “entirely right, in that moment of trade conversation,” particularly with countries in the Middle East who oppress and imprison Christians, “to have a religious and human rights conversation.”

And in using trade sanctions, he said, it is important to remind countries “that we have a value. That people have dignity. And we’re to be able to honor their dignity.”

Maloney, who is the founder and co-chair of the Congressional Caucus on Hellenic Issues, praised “strong historical support in Congress for Greece.”

“And since we started the Greek caucus, what I’m most proud of is, any anti-Greek legislation in Congress doesn’t even come to the floor. They don’t even try, because they know we have the votes to defeat it,” she added.

The caucus focus on topics such as U.S. aid to Greece and Cyprus and the status of Ecumenical Patriarchate and developments in the Aegean.

She also believes, she said, that “we have the votes in Congress to stop the persecution of Christians and other religious minorities around the world.”

Of support for religious liberty, Maloney added, “I would say that it’s not just the moral and right thing to do. It is a security thing to do. Because if you look at countries that respect the rights of minorities and women and religion, they don’t have terrorism. It’s the countries like Libya with some terrorists in it that are doing these types of things.”

She also suggested that maybe there be a rider to the next appropriations bill saying, “No aid to Egypt, unless they allow (Coptic) Christians to rebuild their churches.”

Further, she said, she feels that she and Rep. Gus Bilirakis, the Florida Republican who is the other co-chair of the Hellenic Caucus, “should put in a bill that requires the Department of State or Commerce or wherever to keep a tally of how many Christians are being killed where, and what the Christian population is. The rumors that go out from 50 percent of the population to .002 percent — that is genocide, that is murder, but you can’t really focus and get the resources on a problem until you document how bad it is.”

“I also believe, very strongly, that our own Christian community — Christian, Catholic, Orthodox, Greek, Baptist, Presbyterian — all of Christianity in America should band together … to put the force of law and the force and strength of the American government toward stopping it.”

Muslim blasphemy laws that target Christians “continue to accelerate around the world,” Lankford said. “Yet again, Pakistan is debating the advancement of greater enforcement of blasphemy laws.”

Lankford cited the case of Joseph A. Kennedy, a high school football coach in Bremerton, Washington, who was suspended from his job for praying on the 50-yard line not before, but after his games. A federal appeals court has rejected his bid to be reinstated and said the school had the right to discipline him.

“This world needs a model,” he concluded. “Because most of the world does not believe you can have religious liberty. We’ve got to set a higher standard on that.”

The Dec. 4-6 Archon International Conference came on the heels of a “Solidarity in Suffering,” a Week of Awareness and Education, sponsored by the U.S. Catholic Church to raise awareness and educate people about the plight of persecuted Christians in the Middle East.

That weeklong effort was jointly sponsored by the U.S. Conference of Catholic Bishops, the Knights of Columbus, Catholic Relief Services, the Catholic Near East Welfare Association and Aid to the Church in Need. that runs through Dec. 3.